Women accounted for 55% of coronavirus-related April job losses. Two women laid off in Seattle detail how the leisure and hospitality sector was especially hard hit. 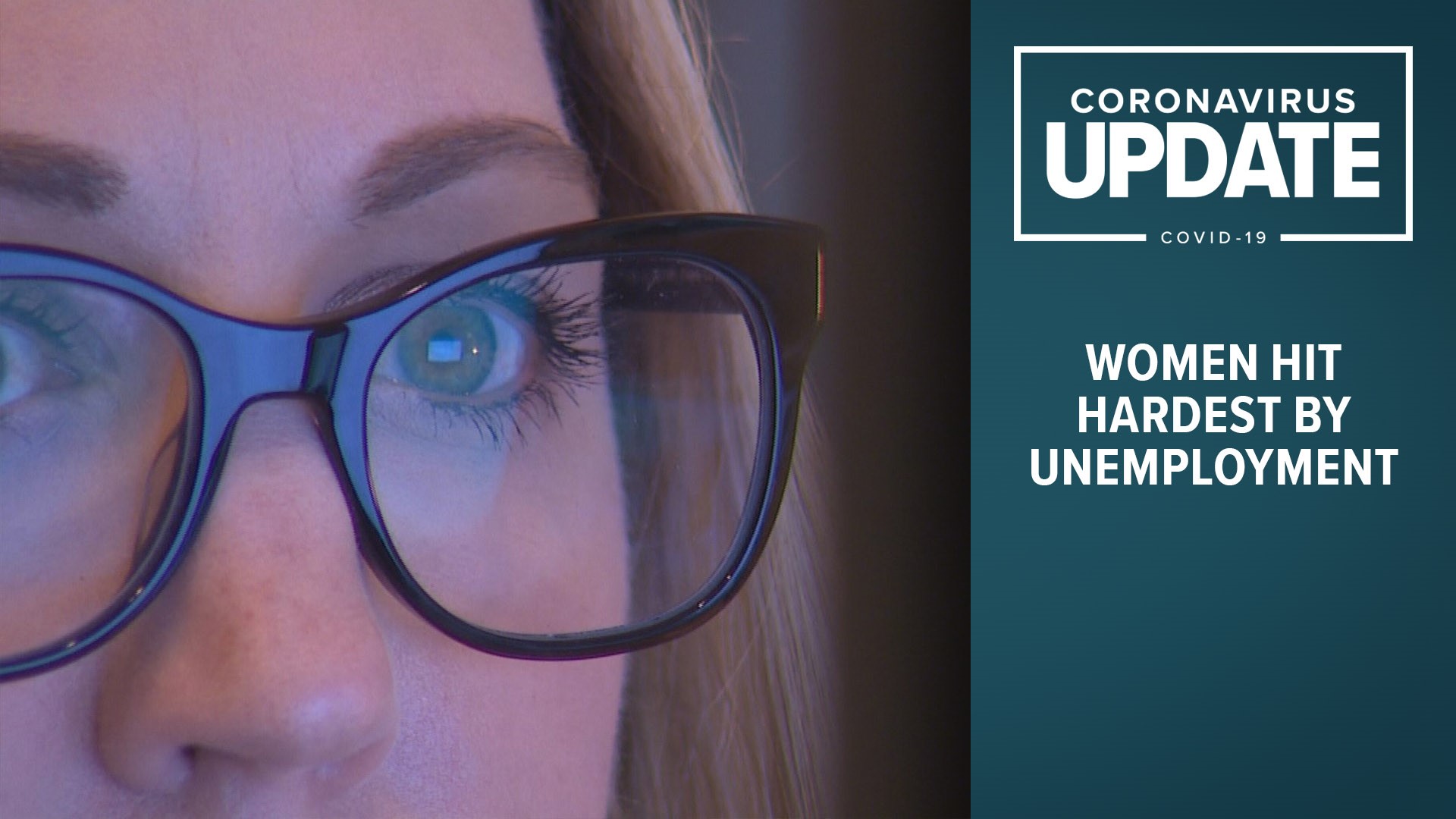 SEATTLE — As unemployment hits record levels, the numbers also show women bearing the brunt of the impact in April.

The leisure and hospitality sector was especially hard hit, accounting for more than one in three of the month's job losses. It is a sector that includes bars and restaurants, and it also has high female employment.

Halo Summerlin was working as a bartender in Seattle when she started receiving the emails from her boss about the need to reduce hours.

"I was like, uh oh, that's going to be a problem," recalled Summerlin.

Summerlin found herself facing the same fate as Erin McGuire, who realized her job was in jeopardy.

"It was honestly pretty sudden, but I really trust Tom and his decision making," McGuire said.

She’s referring to Seattle Chef Tom Douglas. McGuire and Summerlin were both working as bartenders at Palace Kitchen, one of his 13 restaurants. They were laid off in March.

“I just really loved being a part of the company and the restaurant," said McGuire.

Summerlin, who lives alone, said she misses the social interaction and of course, the financial stability. Before the pandemic she had two jobs and worked at TanakaSan, a Tom Douglas restaurant that closed in January.

“You just kind of go a little bit numb. Like for me personally, I had already dealt with so much loss. My father died in November suddenly of cancer. Then I lost my job at TanakSan. And then I'm losing my job at Palace Kitchen," Summerlin said.

The National Women’s Law Center (NWLC) said “the COVID-19 crisis has laid bare the disastrous consequences of longstanding racial and gender inequities.” On the NWLC’s website, a graph shows women’s share of jobs versus job losses in April. One sector highlighted is retail trade. The NWLC's graph shows women making up 48% of the workforce, but suffering 61% of the job losses.

"It's another thing that is a little infuriating. It’s been infuriating to watch it over many, many industries for many, many years and decades," said Summerlin.

For McGuire, the job loss derailed a dream.

“We were a week away from getting the keys to a house we were closing on," explained McGuire said. "The last step was to verify employment."

RELATED: What’s a SAW account? Why you should register to prevent unemployment fraud

Fresh out of work and with a new house no longer theirs, McGuire and her family moved in with her in-laws. McGuire said she wants to find a job, but is concerned about the virus and childcare because her 8-month-old daughter has health issues.

“She actually had a seizure about a month ago," said McGuire. “Just to find people that we trust with her, it's just all-around kind of a difficult situation.”

Diana Pearce is a retired University of Washington professor and the current director of the Center for Women’s Welfare. She said with schools and many daycares closed, moms who are still working remotely face a daunting challenge.

"It makes it very difficult for women," said Pearce. “They're supposed to be working at home, and taking care of children. You can't really do two jobs at once.”

Brea Starmer said she has found a way to make it work. The mom of two founded Lions and Tigers in 2018, a Bellevue-based company that offers consulting and talent solutions for businesses. She said her work-from-home model focuses on flexibility for the entire team.

“They get to sign up for 10 or 20 hours of work because that's where they know they can be most impactful. That to me is a bridge and a solution to a way of work in the future," said Starmer.

Starmer said she sees more companies, like Amazon and Microsoft, embracing the idea of working from home. She said more flexibility when it comes to work could be one positive aspect that comes from this pandemic.

However, that flexible model does not work for many in the hospitality industry.

The Full Service Workers Alliance of Seattle has been sharing information about the impact of COVID-19 on restaurants along with resources for the unemployed.

Summerlin and McGuire both said they enjoy working in restaurants. They are focused on figuring out what's next.

“The fact that we do have to go back to normal at some point is just kind of scary. I don't know what that's going to be," said McGuire.

“You want to go back to knowing that everything is okay, the world is okay. And to know that we don't know what that is going to look like as far as the timeline, it is terrifying," said Summerlin. "I just try not to think about it, but it's terrifying.”

Summerlin and McGuire are optimistic that Palace Kitchen will reopen, but they both said they are also realistic about the fact that if they are hired back, they will likely face reduced hours.