The DOH sent out a release the same day the CDC reversed its guidance to recommend masks for everyone regardless of vaccination status inside public spaces. 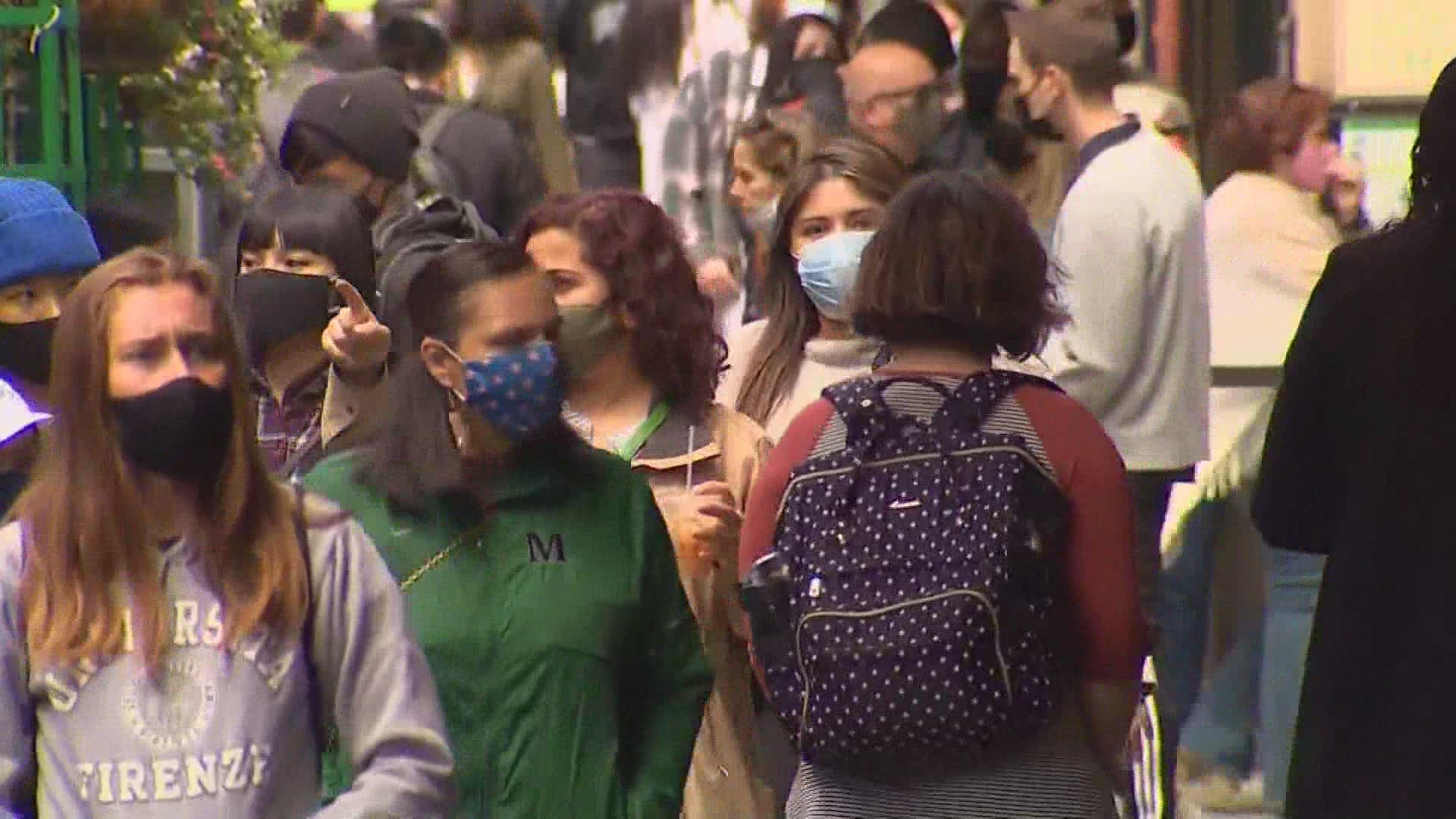 SEATTLE — COVID-19 vaccination rates in Washington state are not increasing quickly enough to get control of the virus, the Washington State Department of Health (DOH) said Tuesday in a release.

The release came the same day that the Centers for Disease Control and Prevention (CDC) reversed its masking guidance to recommend that unvaccinated and vaccinated people wear masks in indoor public settings for counties seeing high and substantial levels of transmission.

This includes most of Washington, including Pierce, King and Snohomish counties, according to the CDC data tracker map.

According to the DOH, case counts and hospital admission rates have flattened after steadily decreasing in mid-June. As of July 8, multiple counties are experiencing an uptick in case counts.

The delta variant, known to be a more transmissible strain of the virus, is now the dominant strain in circulation, making up almost 58% of the cases that went through genetic sequencing between June 20 and July 3.

The DOH’s projections estimate that on July 19, 92% of cases in the state could be from the delta variant.

“I’m deeply concerned about areas of the state with lower vaccination rates now that a more infectious variant is likely to be the one that reaches those communities,” said DOH Acting Chief Science Officer Dr. Scott Lindquist.

Despite increasing immunity among the overall population, the rate of the increase has slowed significantly, according to the DOH, with some communities experiencing much lower immunity rates than others.

#DeltaVariant surging in U.S. New data show Delta much more contagious than previous versions of #COVID19. Unvaccinated people: get vaccinated & mask until you do. Everyone in areas of substantial/high transmission should wear a mask, even if vaccinated. https://t.co/tt49zOEC8N

The DOH continued to remind everyone that the COVID-19 vaccine is the best protection against severe illness. On July 4, hospital admission rates among unvaccinated people 45 to 64 years old were roughly 20 times greater than the rates of vaccinated people in the same age group.

“If you’ve been waiting to get vaccinated for any reason, now is the time to protect yourself, your family and everyone around you. With transmission increasing and immunity levels dangerously low in many communities, every vaccine matters,” Lindquist said.

On Tuesday during a telebriefing, officials with the CDC said that it was reversing masking guidance for vaccinated individuals to go back to wearing masks in indoor settings where cases are surging and that teachers, students and support staff at schools should wear masks indoors regardless of vaccination status.

In Washington, the counties included in the CDC’s new masking guidance are deemed to have a high or substantial transmission level.

Those that have a high transmission level, according to the latest data, are Asotin, Benton, Columbia, Douglas, Ferry, Franklin, Kittitas, Klickitat, Pacific, Snohomish, Spokane, Yakima and Walla Walla counties.

However, prior to the CDC’s recommendation, eight health officers, including those from the state's three most populous counties, King, Pierce and Snohomish, signed a joint statement Monday recommending face masks for everyone inside public spaces when the “vaccination status of those around you is unknown."

The DOH said Tuesday that more vaccination is needed to get control of the virus across the state. Those who are vaccinated are encouraged to urge loved ones nearest to them who can but have not gotten vaccinated to do so as soon as possible.

The latest data from the DOH shows that nearly 67% of the state’s eligible population, or those at least 12 years old, has received at least one dose of the vaccine.