Washington state preparing to fight wildfires in the time of coronavirus

State Commissioner of Public Lands Hilary Franz says they’re currently working with the federal government to rewrite the playbook for wildfires during a pandemic. 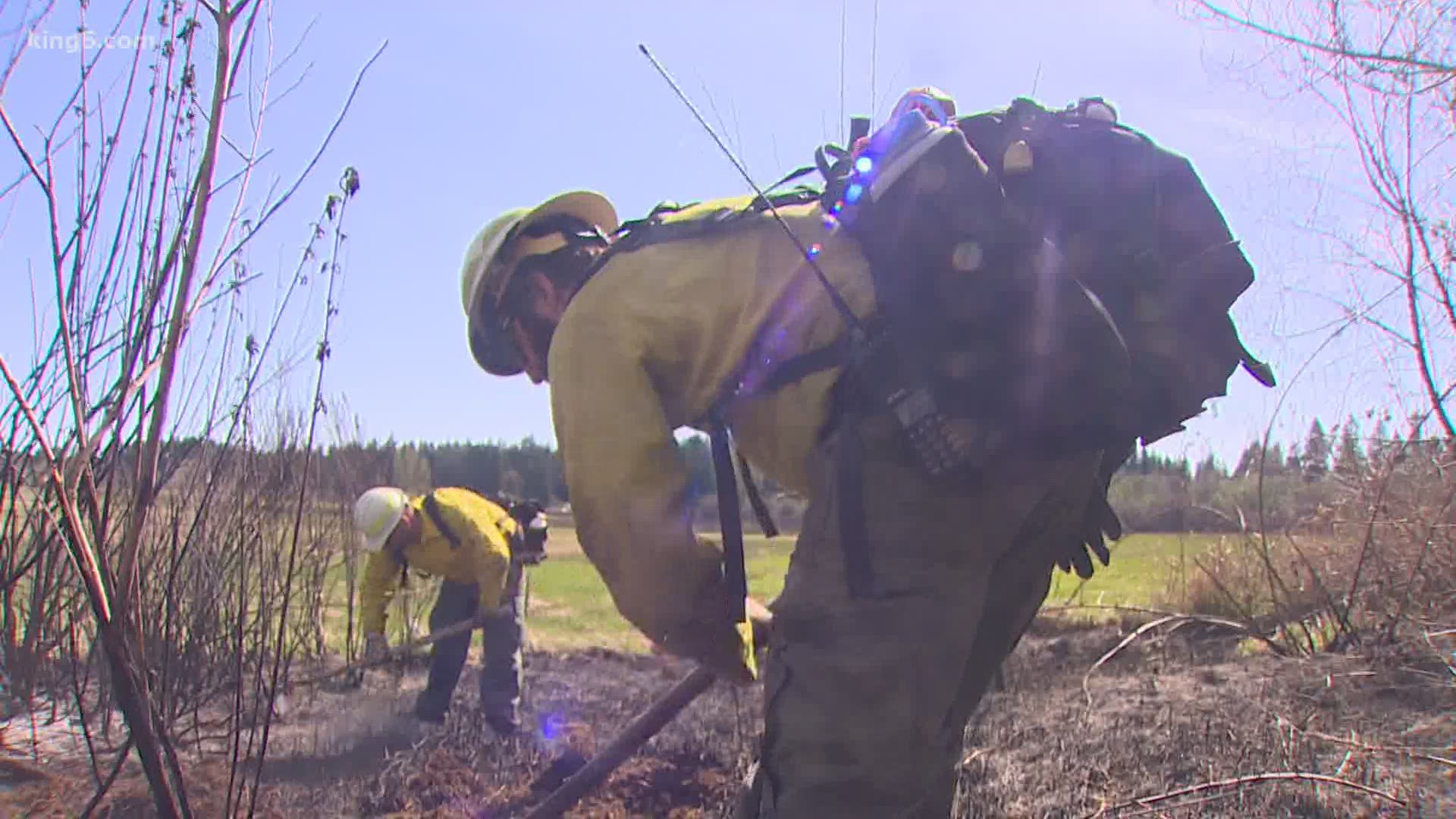 ARLINGTON, Wash. — Washington state is gearing up for a new challenge this year – fighting wildfires in the time of coronavirus.

Fire season is already here, too -- 160 fires have sparked so far statewide, with 30% of them in the western part of the state. Thursday, Dept. of Natural Resources crews were fighting two of the largest fires burning near Arlington in Snohomish County, and Acme, in Whatcom County.

“It’s been challenging to fight fire, and to get people trained up this year,” said Jay Guthrie, asst. region manager for Forest Practice and Fire with the Washington Dept. of Natural Resources.

Spring training sessions have moved online, which makes it difficult to do the hands-on learning of firefighting. Prescribed burns were canceled. Crews are also trying to practice social distancing – keeping at least six feet apart while working in the field.

They do have one thing going for them already:

“Part of normal working safety is to keep 10 feet apart, so any swing of a tool is not within range of someone else,” said Guthrie.

State Commissioner of Public Lands Hilary Franz said they’re currently working with the federal government to rewrite the playbook for wildfires during a pandemic.

She’s especially concerned at the prospect of a larger fire, because the hundreds of people working these complexes live in camps together for weeks on end, in close quarters that make social distancing and high levels of sanitation difficult.

“Every fire season, they have what’s called the ‘camp crud,’ the flu that comes into these camps,” said Franz. “…Now, we’ve got something that’s even worse. It spreads more quickly and can take someone’s life as we’ve seen.”

Franz said they’re considering several ways to address this, from reducing the number of people together in vehicles and aircraft, providing masks and personal protective equipment for those in enclosed spaces and in camp, to shaving stations in camps so bearded firefighters can correctly wear respirators.

She did note it would be too dangerous for crews to wear flammable masks while working near fires.

Guthrie mentioned a possible health screening for crews, such as a questionnaire, or temperature checks, or more handwashing stations.

“You certainly get dirty out on the fireline,” he said.

The way they fight fires could change to some degree, too – the DNR has focused on early air attacks for years now, but is looking at using even more air resources to reduce the number of people on the ground.

“We’re very worried,” Franz said. “Last year we had a fire season that was light for this state, we still had 1,165 fires, but it was a light one. And oftentimes when you have a light fire season the year before, it means more fuel on the ground, more likelihood for a significant, catastrophic fire season.”

It’s why she asking people to avoid sparking more fires, saying even if you’re not under a burn ban, consider the possible consequences of a fire in this pandemic. She also recommends using some isolation time outside to create defensible space around your home.

Guthrie said this season will come with more challenges – but firefighters will adapt.

“Firefighters are used to dealing with dangerous situations, and all their training is how to be safe, how to engage the fire safely and mitigate the risk,” he said. “So coronavirus is adding one more level to that.”