The Department of Health says it will not receive extra doses of the COVID-19 vaccine and instead will get the same amount as previous weeks - about 100,000 doses. 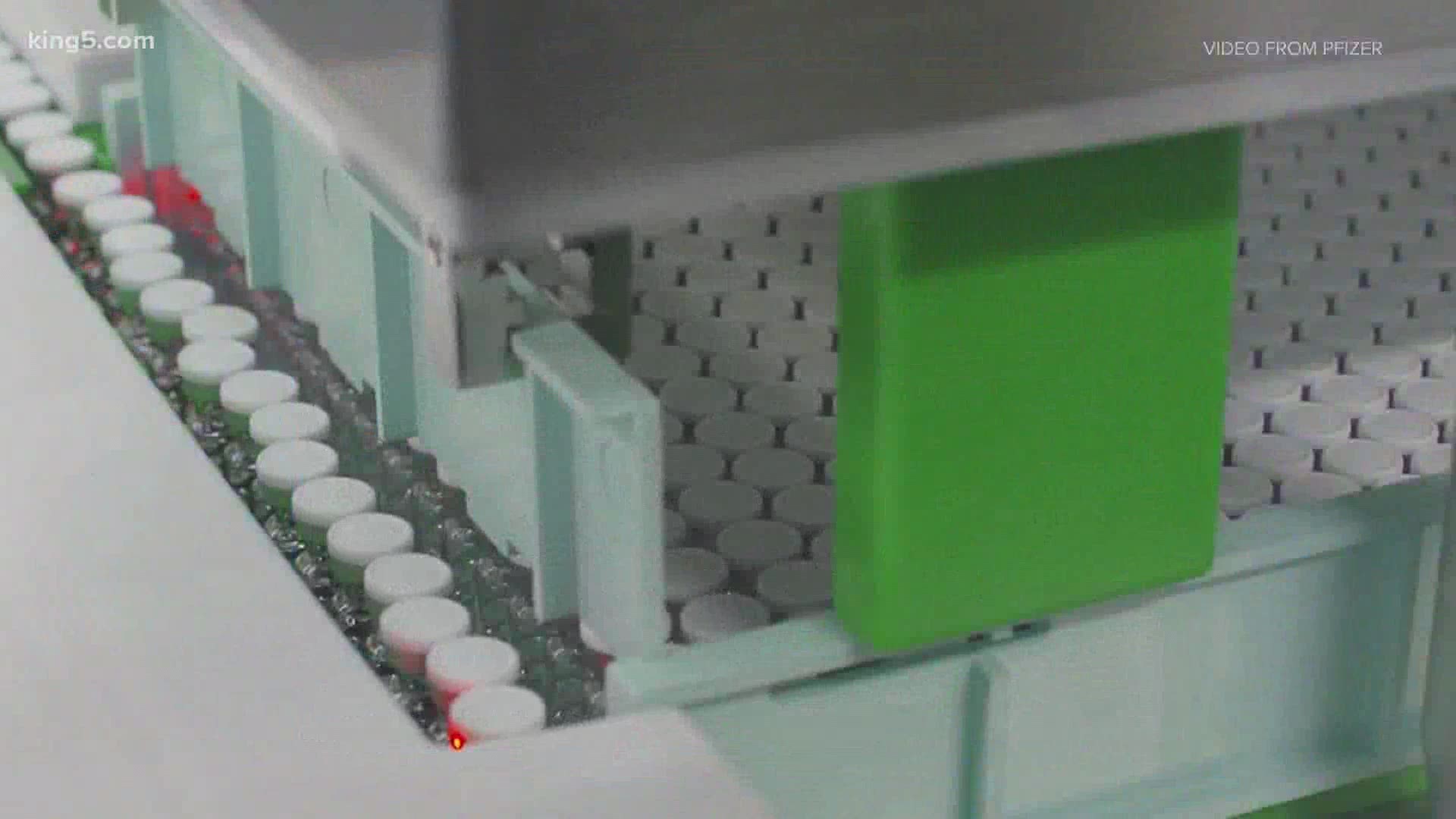 SEATTLE — The governors of Washington and Oregon are demanding answers from the Trump administration after the federal government said Friday there are no COVID-19 vaccine doses left in the federal reserve.

As a result, the state Department of Health (DOH) said Friday evening that Washington will not be getting additional doses of the vaccine that were promised by the federal government. Instead, the same amount will be shipped as previous weeks -- which is about 100,000 doses per week.

"This is a big pivot for vaccine distribution in WA state. We plan to go to Phase 1B1 in the coming days. That means about 1M new people will be eligible for the COVID vaccine. Bottom line: If you're Phase 1A (work in health care), go make your vaccine appointment now!" the DOH tweeted.

On Friday morning, Oregon Gov. Kate Brown said her state’s efforts to increase COVID-19 vaccinations have been thrown in disarray because of “deception on a national scale” by the Trump administration.

The Democrat tweeted that she was told by General Gustave F. Perna, who leads the “Operation Warp Speed” (OWS) federal vaccine effort, that states will not be receiving increased shipments of vaccines from the national stockpile next week “because there is no federal reserve of doses.”

Brown said she was demanding answers from federal officials and that she was “shocked and appalled" that they set an expectation on which they could not deliver.

Washington Gov. Jay Inslee responded to the news Friday tweeting, “Governors were told repeatedly by [the U.S. Department of Health & Human Services] there was a strategic reserve of vaccines, and this week, the American people were told it’d be released to increase supply of vaccine. It appears now that no reserve exists. The Trump admin. must answer immediately for this deception.”

Governors were told repeatedly by @HHSgov there was a strategic reserve of vaccines, and this week, the American people were told it’d be released to increase supply of vaccine.

It appears now that no reserve exists. The Trump admin. must answer immediately for this deception. https://t.co/JJky0NcbPi

Governors across the country echoed similar sentiments Friday, claiming they were deceived by federal officials about availability of a strategic supply of doses.

Michael Pratt, a spokesman for the U.S. Department of Health and Human Services, said that states may have been confused in their expectations but that there has been no reduction in doses shipped to them.

Biden alluded to the tensions Friday and pledged to communicate better with states so they know how much vaccine will arrive and when.

“Right now we’re hearing that they can’t plan because they don’t know,” he said. “That stops when we’re in office.”

"As you all know, the pace of vaccine delivery to the states has not kept up with what was advertised and what was promised by Operation Warp Speed," said Duchin. "So, you know, at baseline we’re not getting as many doses as we anticipated, the doses haven’t been increasing each week as we were told they would, and we have very little insight into the supply issues at the federal level.”

While there’s now worry about the state losing out on expected doses, the vaccine allocation to counties appears to be uneven.

Skagit County officials told KING 5 they just got word they’ll be receiving 1,000 doses next week after not receiving any in two weeks.

This, while Clallam County is already starting to vaccinate people in Phase B1 as they have more than enough doses to blow through Phase 1A.

King County has received 23% of the state’s total vaccines, but according to Duchin, that’s still not enough.

“I think everyone realizes we have significantly more than 23% of that state’s front-line healthcare providers in King County and our metro area. So, proportionally we haven’t received the amount of vaccine that we would expect to be able to offer it all to eligible healthcare providers,” he said.

In a statement to the DOH Friday, Operation Warp Speed (OWS) said the federal government’s initial vaccine policy in December was to hold second doses in inventory, which would backstop potential disruptions in the manufacturing process that could lead to people not getting their second dose and keep jurisdictions from storing large amounts of the vaccine for a long time.

Once OWS had “increased confidence” in Pfizer and Moderna’s manufacturing capabilities, OWS synchronized production and delivery of the first and second doses to minimize storage and maximize the amount available to recipients.

“OWS has reduced its inventory to levels minimally necessary to smoothly fulfill orders forecasted over the next 7-10 days,” the statement reads. “The notion that there is a large bolus of second doses that will be released to the jurisdictions is not accurate."

OWS also began liquidating its “safety stock” this week, which was originally meant to offset emergencies. However, in the first 30 days of vaccine distribution, OWS said these requirements weren’t as frequent or severe as initially anticipated. States will see a 2-5% increase in future vaccine allocations due to this liquidation, according to OWS.

Despite the back and forth Friday over the amount of doses, state health officials still plan to move to the next phase of vaccinations in the coming days.

According to the state DOH, more than 201,000 COVID-19 doses have been given to Washingtonians in Phase 1A. That’s less than 3% of the state's population.

During a press briefing Wednesday, DOH officials announced that the next phase of the state’s vaccine rollout, known as Phase 1B, will be on an accelerated timeline. Officials said the state will move into its next phase of COVID-19 vaccination sooner than expected and will begin inoculating people aged 70 years and older.

Inslee admitted this week that there have been logistics issues with administering the vaccine, and he blamed the outgoing administration and promised help is on the way.

“Every state is having these challenges. It’s like any new system. But I believe we are going to have a fairly rapid increase in our production, in getting people this vaccine,” said Inslee.

On Thursday, President-elect Joe Biden unveiled a $1.9 trillion coronavirus plan to turn the tide on the pandemic, speeding up vaccines and pumping out financial help to those struggling with the prolonged economic fallout.

Called the “American Rescue Plan,” the legislative proposal would meet Biden's goal of administering 100 million vaccines by the 100th day of his administration, while advancing his objective of reopening most schools by the spring. 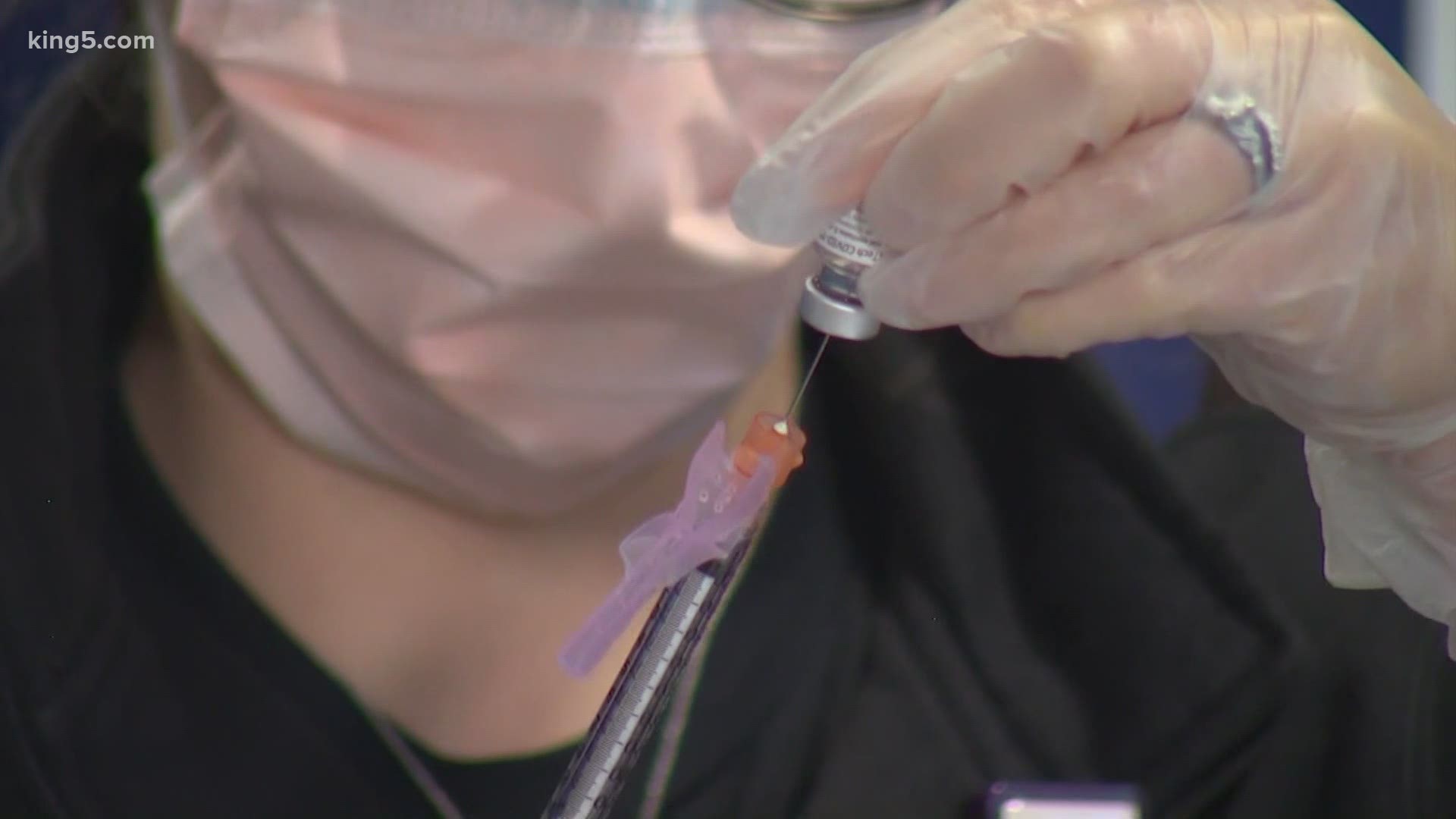