The clinic will target south King County, which has seen higher rates of COVID-19 cases. King County aims to give out 4,000 to 6,000 shots a day. 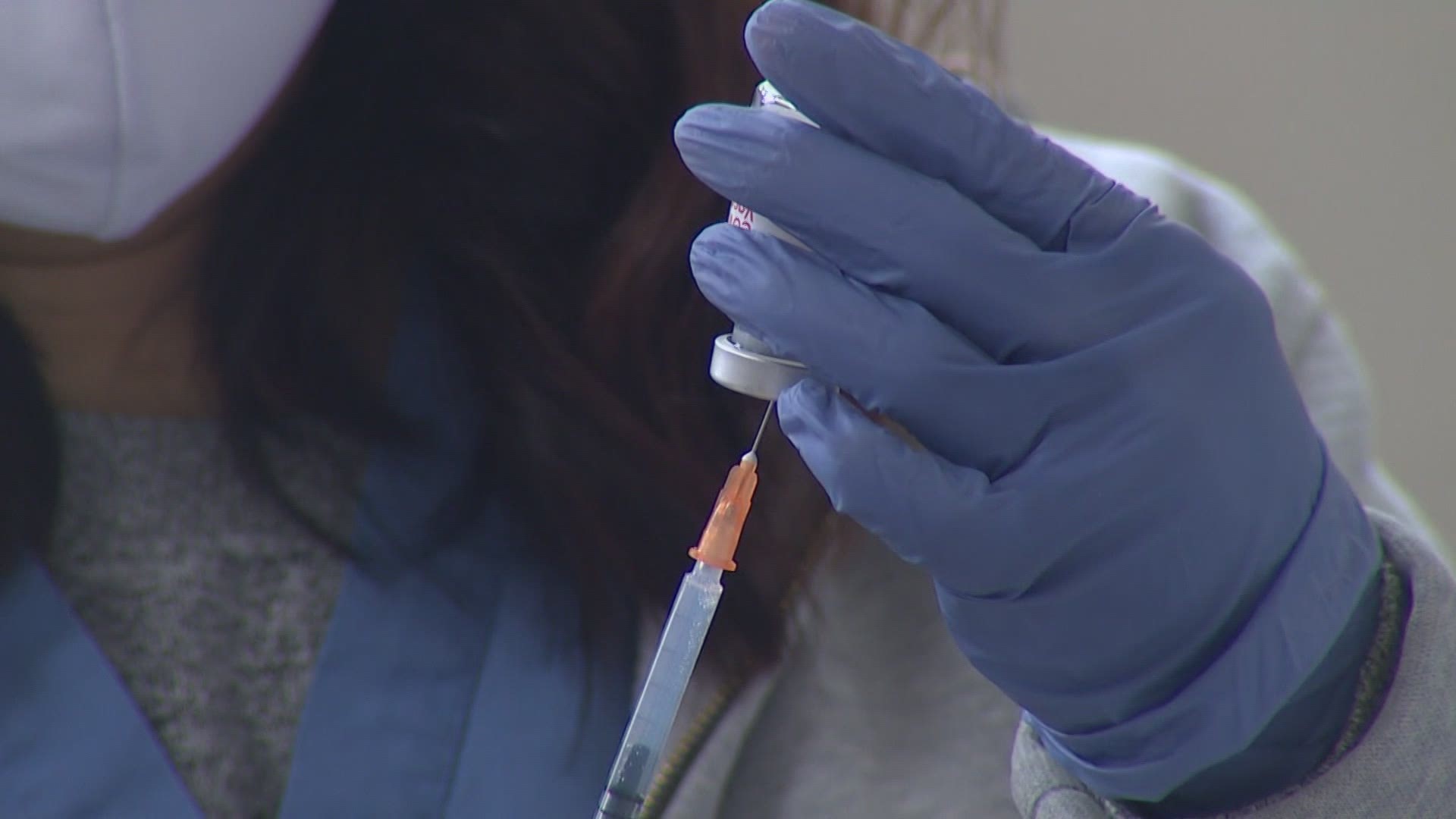 AUBURN, Wash. — Public Health -- Seattle & King County opened a new vaccination site in Auburn as it anticipates ramping up operations as more people becoming eligible for the vaccine this week.

The clinic, located at the Outlet Collection shopping center in Auburn, administered at least 400 COVID-19 vaccines Monday on its launch day. The goal is to vaccinate at the capacity of 4,000 to 6,000 people a day, according to King County's public health physician Mark Del Beccaro.

The Auburn clinic, in addition to an existing vaccination site in Kent, aims to further serve south King County communities that have seen higher rates of COVID-19 compared to other areas in the county.

Fuchsia and Stephen Dulan of Kent received their first dose Monday after getting word from their church pastor that they could register at the new site in Auburn.

"If you get the opportunity, I think it's peace of mind," Fuchsia Dulan said.
Dulan works in a courthouse, making her eligible in Washington's current phase.

The new site opening came on the same day President Joe Biden announced that by April 19, 90% of adults 18 and older will be eligible to be vaccinated.

"That would be great; that depends on getting enough vaccine," Del Beccaro said. Del Beccaro said the county has the ability to vaccinate widely, but supply remains the issue.

"Without the number of doses, it doesn't matter if you increase eligibility. You have to have doses to equal that," Del Beccaro said.

Upon getting word of Biden's announcement, Gov. Jay Inslee's Office told KING 5, "We are still looking into the president’s announcement. It does not appear this is a directive, it appears that he is saying that more vaccine is coming. Any reassessment will come after we receive the additional doses."

In a call with reporters Monday, Washington State Hospital Association CEO Cassie Sauer said COVID-19 infections were rising among younger people, and with variants of concern catching up, Sauer hoped eligibility would be expanded sooner than May 1.

"We have considerably more rules than most other states do right now about who can get vaccinated," Sauer said.

Public Health -- Seattle & King County, alongside public health leaders in Washington, said it will not stop prioritizing underserved communities to ensure equity in the distribution process.

Garcia Jean-Baptiste of Covington is a nurse practitioner and received her COVID-19 vaccine in January. She said she still thinks about other front-line workers who may still need to be prioritized.

"Yes, we want everybody to get it, everybody who wants it to get it, but we also have to make sure we do it systematically and in control," Jean-Baptiste said.