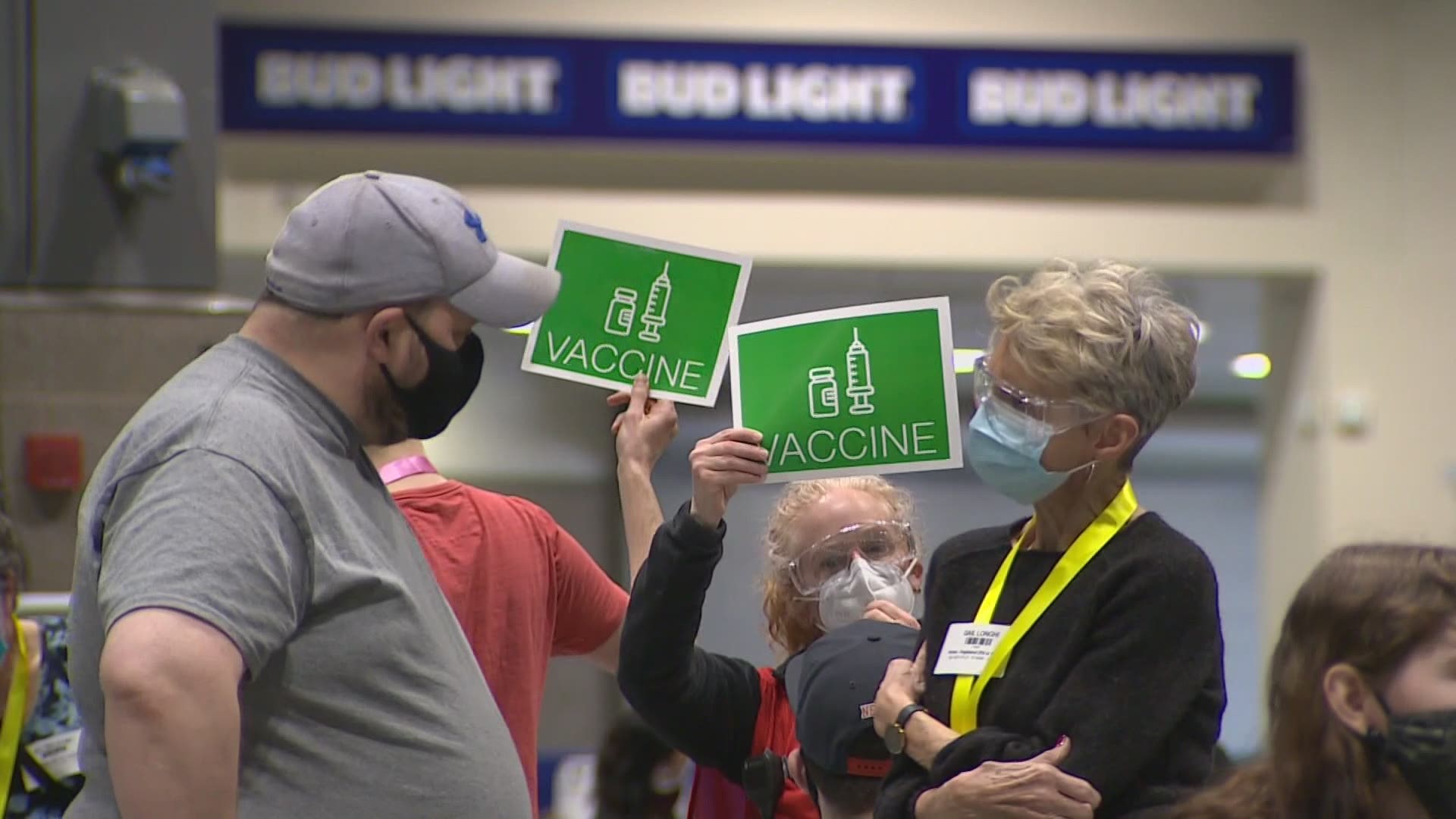 Millions of Washington residents are waiting for vaccine eligibility to expand as state and local health officials warn of a fourth COVID-19 surge in the near future.

"What I can't predict, is how big it will be and how much damage it will cause," Duchin said.

King County has seen 200 new cases in the past week, up 43% from two weeks ago. Duchin said new variants of the virus remain a concern in the country, including two new variants which emerged in California.

At least 400 cases of the California variants have been detected in Washington since December, according to new data released by the Washington Department of Health.

It comes as a flood of vaccines are entering Washington and the U.S. More than one million state residents are now fully vaccinated, and in King County, 33% of adults have received at least one dose.

With California announcing all adults will be eligible for vaccination on April 15, some have nudged Washington to do the same.

Seattle Mayor Jenny Durkan, in a statement, acknowledged that there are issues with equitable distribution of the vaccine, but that the process is becoming more and more confusing. Next week, the vaccines will be available to another tier of people with certain professions, adding potentially 2 million people to the vaccine eligibility pool.

As of right now, Washington state has only announced that every adult will be eligible on May 1st, which is the deadline set by President Joe Biden.

Durkan's statement seemed to give a slight push to move that date up.

"We learned through the pandemic that it is extremely important for the public to have clear communication on what steps were being taken and what we needed the public to do, and those actions had to be grounded in equity and science. As we near the federal government’s May 1 deadline to expand vaccine eligibility, and once supply significantly increases, the Mayor believes the state should consider expanding eligibility sooner to all community members to reduce confusion."

Sarah Nasset, who lives in White Center, received her first shot at Lumen Field in Seattle, Saturday. Nasset is disabled and has at least two comorbidities that have allowed her to get her first dose. She said she wishes her caregiver could get the vaccine now, as well.

"When she tried to apply online, the vaccine process was so convoluted, that it told her that she didn't qualify; and when we asked hey, we're here, it doesn't look super busy, is there any way she could get her vaccine? They said nope, sorry, nothing we can do," Nasset said.

Duchin said he's not in favor of expanding eligibility, pointing to data that shows communities of color are under-vaccinated when compared with the rest of the population.

"Should the vaccine eligibility be open to all adults 16 and older? That would only make our situation worse, in my opinion, exacerbate the gap between supply and demand," Duchin said. "We know that people who have more resources and who are more savvy about seeking vaccine are able to acquire it more readily. And that would potentially further disenfranchise some of the communities that are already under-vaccinated and having difficulty accessing vaccine."

The final call on whether or not to expand vaccine eligibility lies with the state. On Thursday, Washington Department of Health officials said the state will continue to prioritize vulnerable groups who need it the most to ensure distribution equity.

"We're just going to continue to do what's best for Washington, and as long as we know that people are getting vaccinated in the appropriate groups, we're going to go that route knowing that in five weeks, at that point, everybody above age 16 will be eligible," DOH Secretary of Health Umair Shah said.

Shah said he and his team study COVID data on a daily basis and will pivot to potential changes to the vaccine rollout should supply sufficiently meet the demand.

Washington is currently in Phase 1B-Tier 2 in its vaccination rollout, which allows high-risk critical workers in certain congregate settings like grocery stores and public transit to sign up for the vaccine.

On Wednesday, Washington will enter Phase 1B-Tiers 3 and 4, which allows people 16 and older with two or more comorbidities and all people age 60 and older to sign up for the vaccine.

Per President Biden's directive, the state is planning to make all adults age 16 and older eligible to receive the vaccine on or by May 1.