Demand is higher than supply, causing a rush of people seeking appointments and making it tough to find a shot. 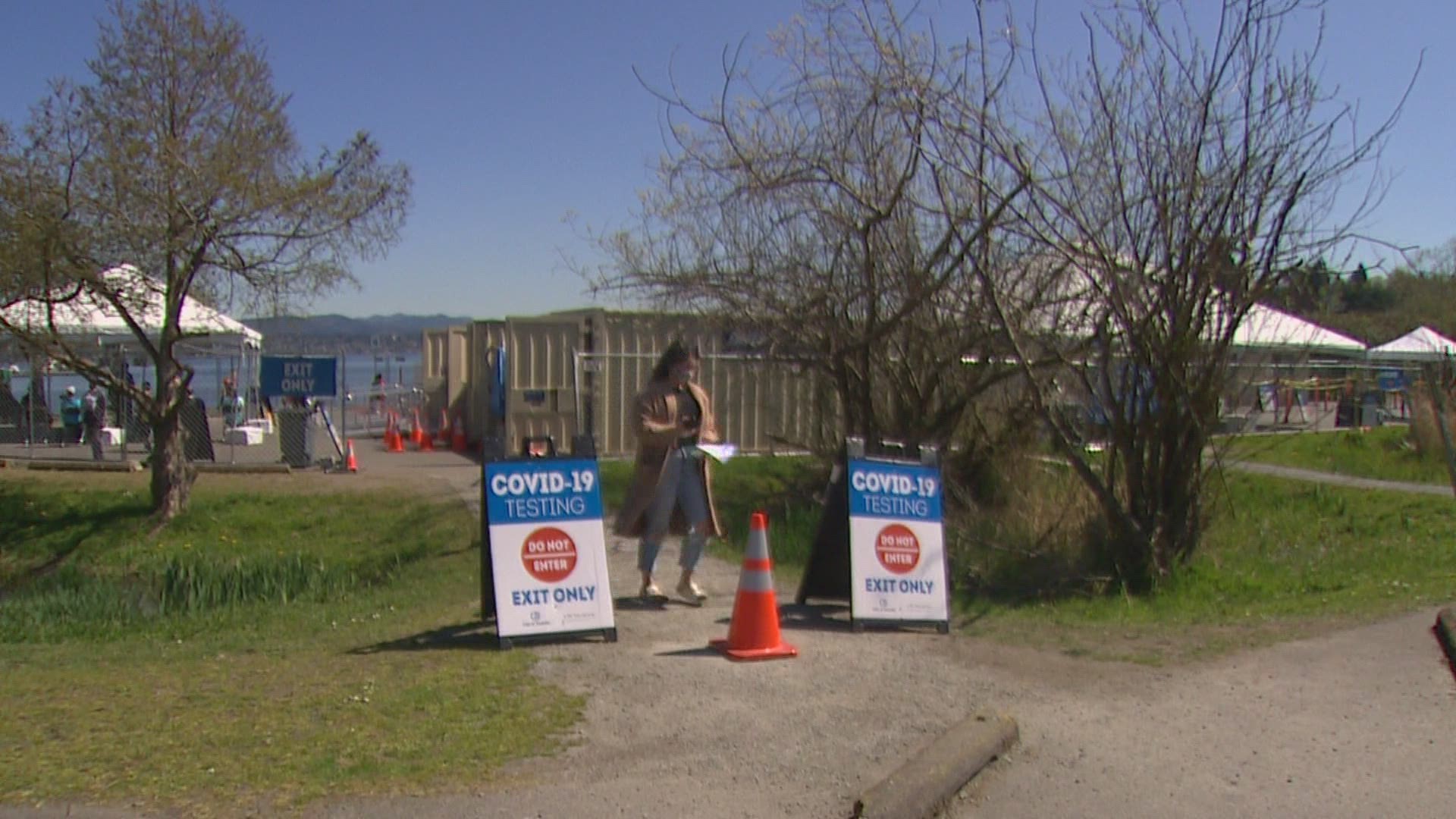 SEATTLE — With 1.5 million people newly eligible for the COVID-19 vaccines, it was a busy day in Washington for providers and those seeking the coveted shots. Thursday, the long-awaited day came: everyone over the age of 16 can receive the vaccines in Washington state.

The rush for appointments was well beyond available supply, which the state has said was slightly suppressed this week because of government supplies, even prior to the federal pause on Johnson & Johnson shots while officials investigate rare blot clot concerns.

160,000 J&J vaccines had been administered in Washington, just a fraction of the more than 4.3 million individual doses.

Gayle McDougall-Treacy of Seattle was trying to book a shot for a friend that wasn’t able to.

“I must have spent an hour, two hours today, I spent two hours yesterday,” she said. “And I have that time, whereas the friend I was trying to do it for didn’t have that kind of time, she had to be at work. So it’s a real challenge for a lot of people. I know people get frustrated and give up.”

To schedule an appointment, the state has provided a centralized search tool called Vaccine Locator. But the tool redirects to individual sites for the actual booking of appointments,  which means in times of high demand, appointments showing in the aggregator can disappear by the time users click through.

Kroger’s eligibility questionnaire was incorrect Thursday morning, only allowing those with co-morbidities to book appointments. This was an issue with several pharmacies during the last phase opening, and though it was updated later in the day, the Washington Department of Health stressed the state sets eligibility guidelines, not pharmacies, so proceed accordingly when hunting for appointments.

The City of Seattle’s booking tool does still include questions about risk factors and essential jobs because the city is still prioritizing vulnerable groups while supply is limited. That said, for those that got appointments at the four city-run sites, the actual vaccination was a breeze.

“And they were really responsive and gave me you know, updates via text and email with instructions and reminders, and took about 20 minutes and I'm in and out!” said Amy Riley, who got her first Pfizer shot at the Rainier Beach site Thursday.

A city spokesperson said all appointments were booked for these city sites Thursday, though they’re operating well below capacity because of vaccine supply limitations. Rainier Beach and West Seattle's community vaccine sites can handle 1,500 shots a day, but each did just over 600. North Seattle College did 800, and the mass vaccination site at Lumen Field did 2,400, a fraction of its capacity of 150,000 a week.

Seattle has more than 151,000 people on the waitlist, city officials said, and received about 24,000 doses this week. They offered the following tips on finding an appointment, and asked for patience:

Overall, persistence appears to be best when booking. Appointments were available from some providers even Thursday afternoon, though it took several tries searching different avenues, and refreshing pages repeatedly with various zip codes. Other users online described long wait times on hold to reach schedulers.

Jaira Amaya lined up outside the SeaMar clinic in White Center at 4 a.m. to ensure a dose was available.

“I can find people here that speak my same language maybe I can understand better because my first language is Spanish,” Amaya said. “So, I think this is a great opportunity for me. I was here before so I feel here more comforted."

McDougall-Treacy ended up finding a shot for her friend, who works for a school district in Washington.

She received guidance from volunteers on the “Find a COVID shot WA” Facebook page, where volunteers have been helping vulnerable groups navigate the more confusing elements of the booking system. The group is open to crowd-sourcing dose availabilities for all, but trained volunteers help people who fall within certain qualified groups.

McDougall-Treacy expressed gratitude that they helped her find an appointment so quickly.

“And I'm just very impressed at how many people they seem to be helping,” she said.

Though illustrating the demand: after she booked for her friend, she tried to repeat the process for her son. The slots were already gone. 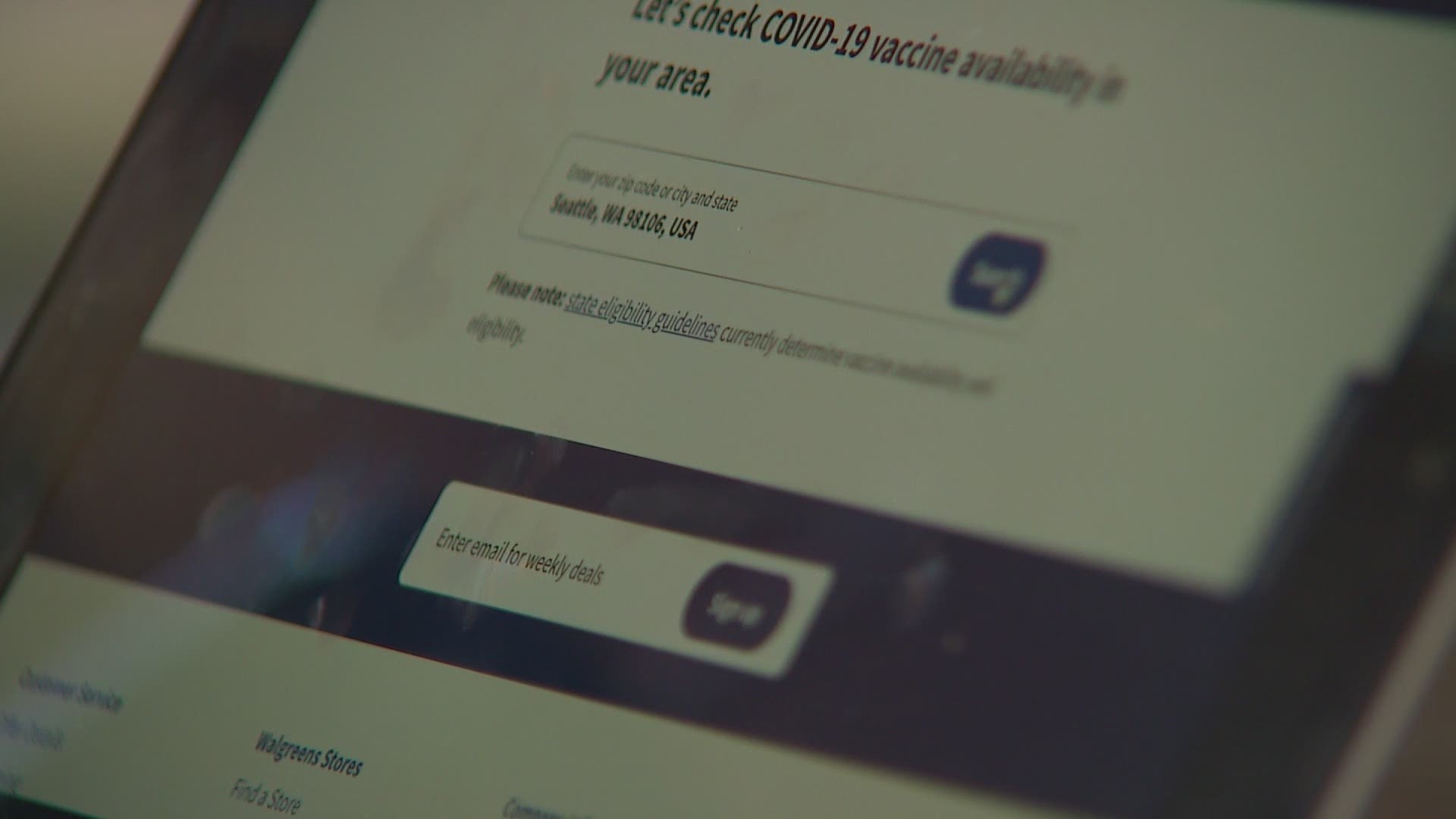