What to know about COVID-19 vaccines in Washington Thursday

Here's what you need to know about COVID-19 vaccines in Washington state on Thursday, April 22. 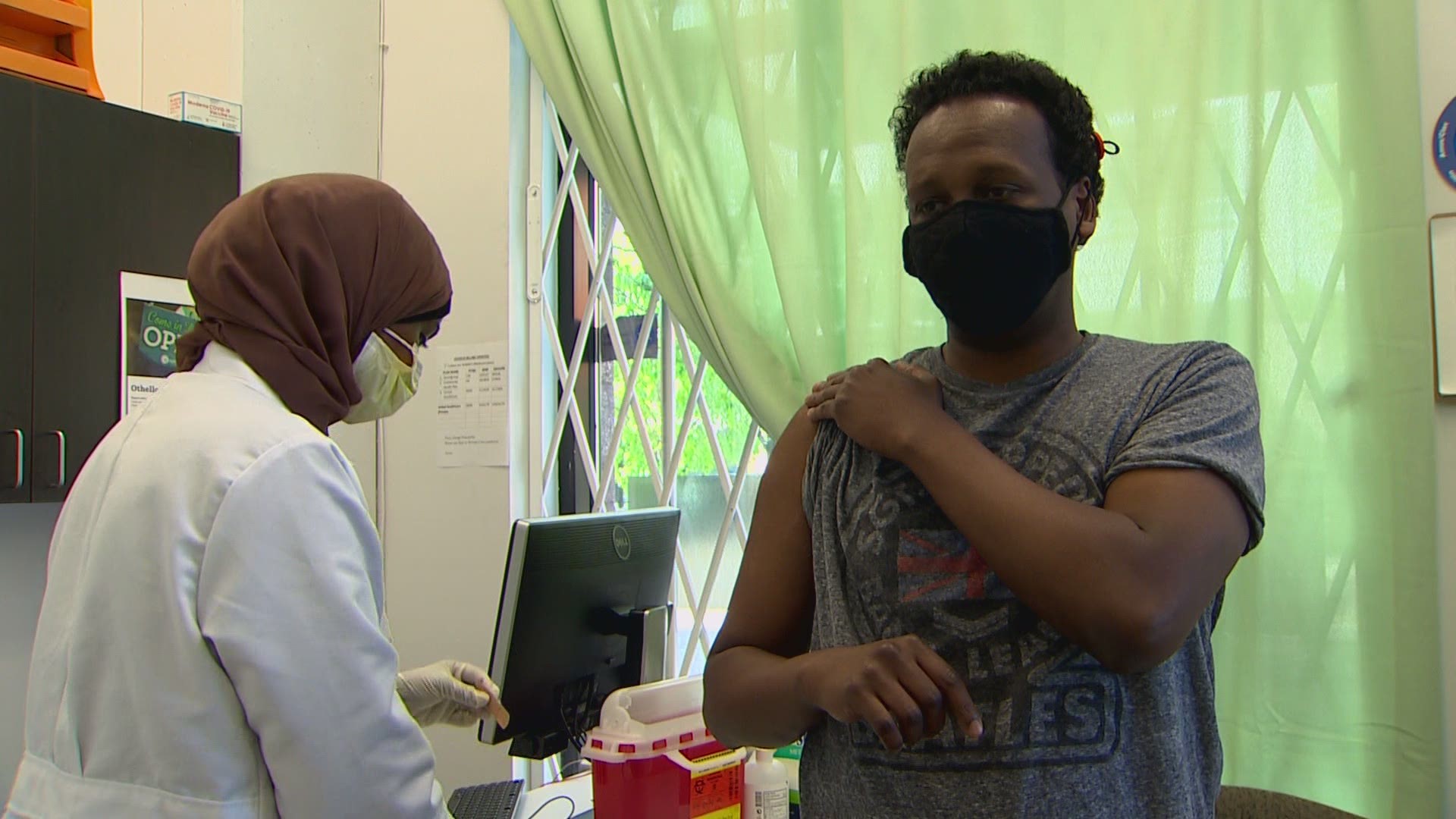 A pharmacy in south Seattle's Othello neighborhood is on a mission to get people of color vaccinated.

Othello Station Pharmacy is offering so much more than just grab-and-go service, it has become a trusted space for people of color to feel seen. Read more

Inslee said that the state is expecting to have delivered 5 million doses of COVID-19 vaccine, and more than half of the adults in the state have received at least one dose.

However, Inslee raised concerns about vaccine hesitancy, because the state is seeing evidence of a fourth wave of COVID-19 cases throughout the state, Inslee said, with a rise in cases and hospitalizations.

"We would like to be done with the virus, but the virus is not done with us," Inslee said.

One reason appears to be because of the variants, Inslee said. The B.1.1.7. variant, which was first identified in the United Kingdom, has become the most prevalent variant of the coronavirus that causes COVID-19.

The variants also have spread more readily among younger populations than previous spikes of COVID-19, he said.

The vaccines have been shown to be effective against the variants so far.

Dr. Dave Carlson, chief physician officer of MultiCare, Pierce County, said despite the growing number of cases, there are not as many ICU cases, mainly because patients have increasingly been younger, between 20 and 50, and because older, vulnerable populations have been vaccinated against the virus.

Carlson said that there have been some breakthrough cases — people diagnosed with COVID-19 after vaccination — but those cases have not been serious.

"We have not seen them in our hospitals, so that's good news. The vaccines are working," Carlson said.

He said that the continuation of coronavirus prevention measures, including handwashing and social distancing, as well as vaccinations, will help curb the spike.

Inslee also said that the state is also focused on equity in vaccination efforts, including outreach efforts into Spanish-speaking communities, which have not received vaccinations in proportion to state population numbers.

The woman, who is in her 50s, received the vaccine before the state paused Johnson & Johnson vaccinations on April 13. State health officials said the woman had the same type of blood clot found in six other women in the U.S. after getting the vaccine.

The CDC and the Food and Drug Administration (FDA) recommended the pause of the J&J vaccine in order to review the rare cases of blood clotting.

COVID-19 hospitalizations among older Americans have plunged more than 70% since the start of the year, and deaths among them appear to have tumbled as well, dramatic evidence the vaccination campaign is working.

Now the trick is to get more of the nation's younger people to roll up their sleeves.

Two-thirds of American senior citizens are fully vaccinated, versus just one-third of all U.S. adults. Over 80% of senior citizens have gotten at least one shot, compared with just over 50% of all adults.

At the same time, however, overall demand for vaccinations in the U.S. seems to be slipping, even as shots have been thrown open to all adults across the country. The average number of doses administered per day appeared to fall in mid-April from 3.2 million to 2.9 million, according to CDC figures.

How long does protection from COVID-19 vaccines last?

How long does protection from COVID-19 vaccines last?

Experts don't know yet because they're still studying vaccinated people to see when protection might wear off. How well the vaccines work against emerging variants will also determine if, when and how often additional shots might be needed.

How to get a COVID-19 vaccine in Washington

Everyone in Washington state aged 16 and over is eligible for the vaccine.

Find a list of vaccine providers on the state's Vaccinate WA page and information on how to make an appointment.

Pfizer is the only vaccine approved for people 16 and 17 years old, and the state is working to update its Vaccine Locator with information about which vaccine is offered at each location.

Several health care providers allow people to join waiting lists for the vaccine, and they will contact you when doses are available. Join the waiting list for: