Here's a timeline of events since Gov. Inslee announced the stay-home order on March 23, 2020 and what lies ahead amid the pandemic. 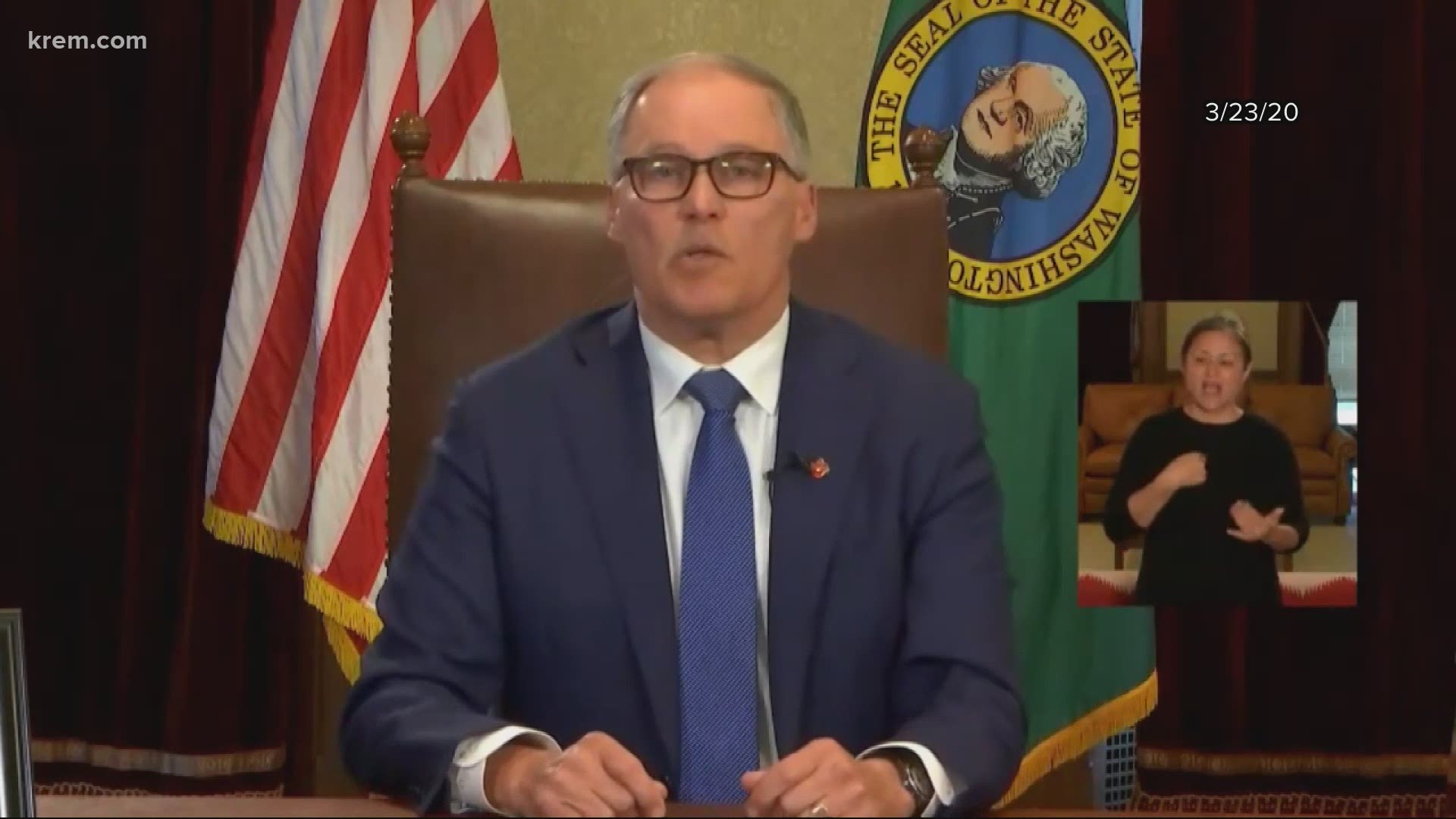 SPOKANE, Wash. — Tuesday marks one year since Washington Gov. Jay Inslee announced the state's first stay-home order in order to curb the spread of COVID-19. Since then, Inslee has implemented several rounds of restrictions.

The stay-home order announced on March 23, 2020 was in place for more than two months. Spokane County moved into Phase 2 of the state's previous reopening plan ahead of Memorial Day in May, paving the way for restaurants and other businesses to reopen at reduced capacity.

Here's a timeline of events since Inslee announced the stay-home order one year ago what lies ahead amid the pandemic.

Inslee issued a statewide order to stay-at-home and stay healthy to help slow the spread of coronavirus on March 23, 2020. It was initially set to last for two weeks.

Inslee extended the state’s stay-home order through May 31, along with unveiling a four-phase approach to reopening the state.

Spokane County officially entered into Phase 2 of reopening after Washington state approved its application for reopening.

Spokane Mayor Nadine Woodward said the city was "open for business." She added that compliance with the Phase 2 guidelines was "voluntary."

Woodward did, however, ask Spokane residents to wear masks and practice social distancing.

Gov. Jay Inslee announced new statewide restrictions to help curb coronavirus spread, including the closure of indoor service for restaurants and bars and prohibition of indoor social gatherings. His announcement came amid record-breaking levels of COVID-19 spread in Washington state.

The most severe restrictions on activity since the pandemic began mostly went into effect on Monday, Nov. 16 at 11:59 p.m.

Citing a high number of COVID-19 cases and hospitalized patients, Inslee extended the state's restrictions on indoor dining, gyms and several other industries until Jan. 4, 2021.

Health officials said the number of hospitalized patients was rising in December.

Since the restrictions were announced, Inslee issued other proclamations to reduce the spread of COVID-19. They included a requirement that people traveling from the United Kingdom and South Africa quarantine for 14 days when they arrive in Washington state.

Washington Governor Jay Inslee announced on Thursday, Feb. 11 that the East region of the state, including Spokane County, would move into Phase 2 of reopening on Feb. 15. He later changed the date to Valentine's Day so people could celebrate the holiday.

The move into Phase 2 allowed indoor establishments in Eastern Washington to reopen at 25% capacity, including restaurants and fitness centers. Wedding receptions were also allowed in Phase 2, with some restrictions in place.

After weeks of uncertainty about the next steps in Washington state's reopening plan, Inslee announced that all counties, including Spokane, would move into Phase 3 on March 22, 2021.

Phase 3 allows for 50% capacity in indoor spaces, including restaurants and gyms, 25% capacity for outdoor sporting events, and expanded capacity for high school and youth sports, among other changes.

On March 11, 2020, President Joe Biden used his first prime-time address to announce his plan to make all adults vaccine-eligible by May 1 and “begin to mark our independence from this virus” by the Fourth of July.

His aim: let Americans gather at least in small groups for July Fourth and “make this Independence Day truly special.”