Uber Eats says a cap on commissions would radically impact how they do business, and could result in an increase in prices for people ordering takeout. 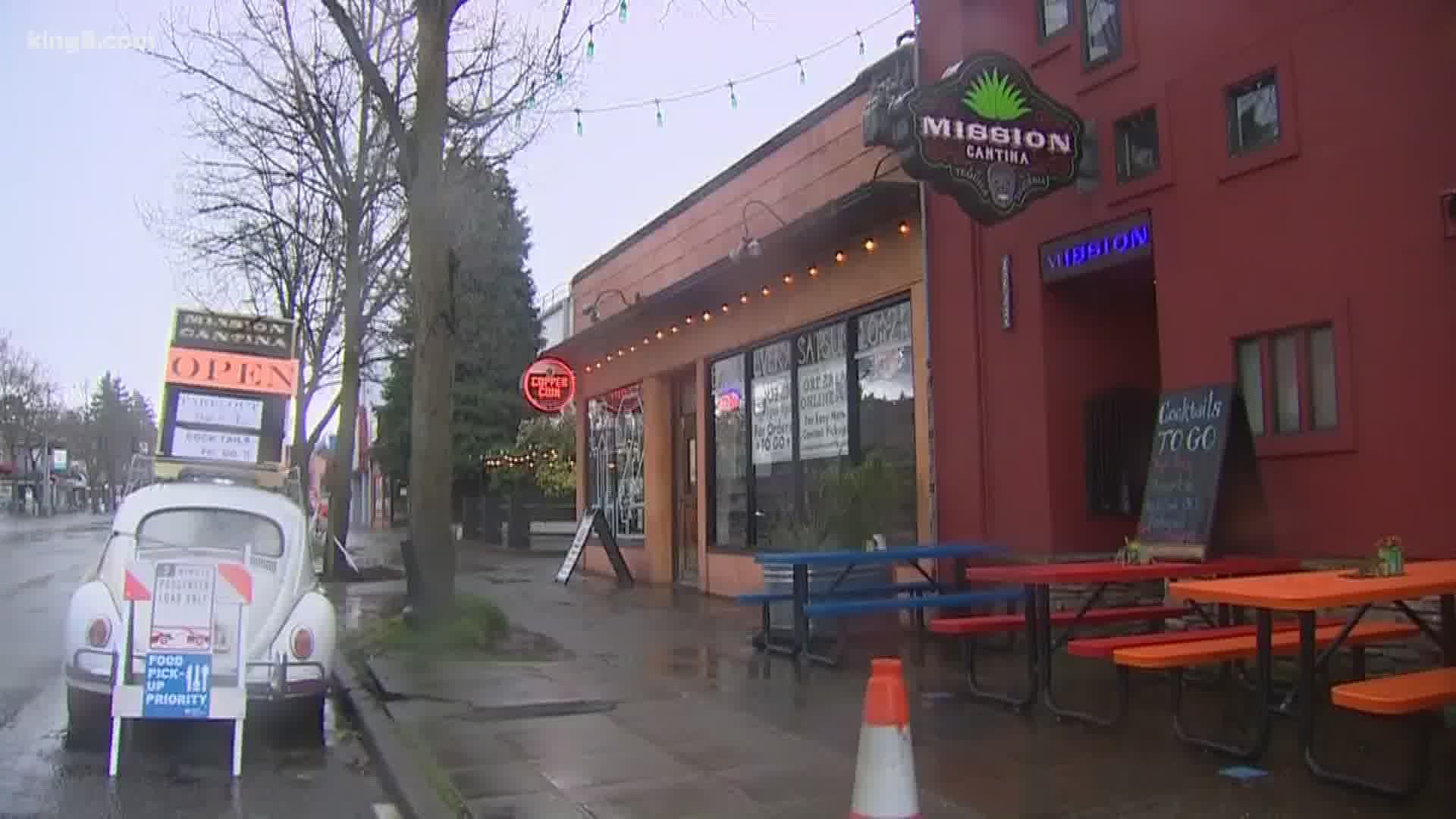 SEATTLE — In a time when restaurants are struggling due to the coronavirus pandemic, only being able to offer delivery and pick up, owners say the charges from third-party delivery providers are eating into the little profits they are earning.

In Seattle, restaurant owners are calling on city leaders to issue an emergency order to cap commissions at 15%.

For people ordering takeout, that could mean the price goes up. That's according to an Uber Eats spokesperson who says a cap on fees would have a dramatic impact on the way they do business.

At Peel and Press, in West Seattle, restaurant owner Dan Austin says he is fighting to stay afloat.

"With social distancing measures, it's going be hard to reopen restaurants, I think we're going be at the end of the governor's dial of turning things back open," said Austin.

Austin says he applied for a small business loan, but did not get the good news he was hoping to hear. The funding ran out.

"It's incredibly frustrating when you hear, say stay open. It will be as easy as getting your money in a week," Austin said.

Not much has been easy, including balancing the budget. He says the delivery app, Uber Eats, takes 30%.

"I've been about four weeks in using them, and they're close to $6,000 in commissions off of our restaurant," said Austin.

That's why Austin is asking for limits on what third-party delivery providers can charge restaurants. The West Seattle Chamber of Commerce sent a letter to City Council with an urgent request for a 15% cap.

"This is just an emergency situation where we need some help here," Austin said.

"It will have a trickle effect," said Stephanie Sedlak, Communications Manager at Uber.

Sedlak says reducing commissions, even temporarily, would radically impact how they do business.

"We'll have to recoup that money somehow. So we'll have to raise fees for the eaters, and that would decrease demand for the restaurants, obviously, decreasing their business. With that decrease demand, there's less work for the couriers," said Sedlak.

RELATED: Buy a beer, help a Washington worker who's out of a job

Austin acknowledges companies like Uber Eats do provide a valuable service, but he says during this pandemic, it's just at too high of a price.

"There is a fair reason for these parties to be making the commission, and they should. We just want it to be more reasonable in this timeframe. They say, restaurant partners, we're not feeling very partnered up with when it comes to Uber Eats right now," said Austin.

According to Uber Eats, commissions paid by restaurant partners are what make it possible for them to provide the services that restaurants have come to expect. It helps cover onboarding new delivery people, including background checks for every delivery person on the platform; ensuring that delivery people earn for their work.

"The bottom line is, we're doing everything we can, at this time, to help restaurants," said Sedlak, who adds that Uber Eats has launched an in-app restaurant contribution where customers can donate to local restaurants. In Washington state, $225,000 has been donated.

A spokesperson for DoorDash released this statement:

"Earlier this month DoorDash announced that we are reducing commission fees for eligible local restaurant partners by 50 percent on both DoorDash and Caviar. This commission relief program will benefit more than 150,000 restaurants throughout the United States, Canada, and Australia through the end of May and 70% of DoorDash partner restaurants in the city of Seattle. This estimated $100 million injection from DoorDash is dedicated to helping merchants respond to the acute financial threats they are facing right now. We are following the discussions in Seattle closely to understand whether the program we have introduced is more beneficial to restaurants and look forward to finding a solution that supports our ongoing commitment to protecting Seattle Dashers and ensuring they have strong earning opportunities, and supporting Seattle merchants."

A spokesperson for Postmates released this statement:

“Commissions are privately negotiated agreements between the restaurant or a consumer goods business and the Postmates platform. We work closely with our business partners to build a custom agreement that reflects the services they ask us to provide to their business, these services are things like paying and providing benefits to delivery couriers, marketing, customer service, courier support, exposure to new customers, and insurance. Commissions are not “fees”, they are the main source of revenue for our company and they are how we pay for the services that we provide to businesses and our customers. Arbitrarily setting on-demand delivery prices has real consequences that undermine our ability to operate, fund relief efforts and benefit programs for merchants, couriers and customers, and kills our ability to provide the services restaurants need to stay open during this national emergency.”

Mayor Jenny Durkan and councilmembers are currently evaluating potential ways to help restaurants impacted by high third-party commissions, according to a spokesperson for Mayor Durkan.

The Mayor's office says it is not ready to share specifics, but there will be more details in the coming days.