As part of nationwide memorial Tuesday to honor lives lost to COVID-19, the Kobe Bell at Seattle Center was rung and buildings in downtown Seattle are illuminated. 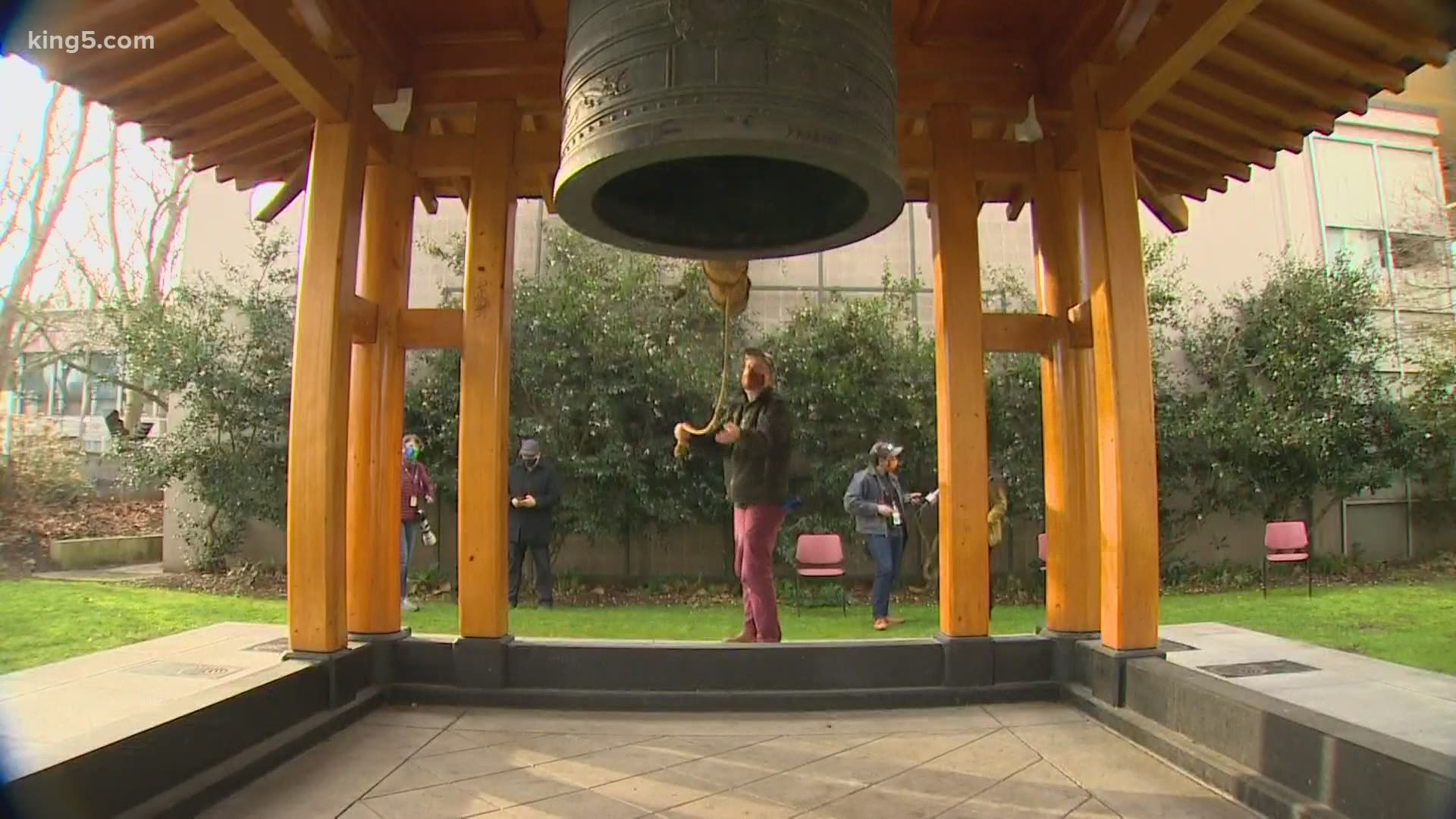 SEATTLE — The City of Seattle joined a national tribute of unity and remembrance for people who have lost their lives to COVID-19.

Several buildings in downtown Seattle were illuminated in light amber Tuesday evening to commemorate the toll of COVID-19 on American lives.

The Presidential Inauguration Committee invited cities to participate in the national memorial with President-elect Joe Biden, who led a ceremony in Washington D.C. ahead of his inauguration Wednesday.

Dr. Ben Danielson, who works in the Department of Pediatrics at the UW School of Medicine, was among the five selected to honor the lives lost to COVID-19 during the ceremony at Seattle Center.

“I think I came here not quite sure what to expect…then the bells started ringing and it changed me,” he said.

Danielson said the remembrance made him reflect on the ways in which communities have been so devastated.

“Our handling of this pandemic has been unfortunate on so many levels, and the cost has been borne by black and brown communities disproportionately across this nation,” he said. “The toll is unjustifiable as far as I am concerned, and I hope we are looking carefully at ourselves and our systems and really committing to some different way regarding each other, taking care of our communities.”

Virginia Ramos, who also participated in the ceremony, has felt the devastation. The health care worker lost her aunt to coronavirus in December.

“There's no words to explain the gravity of the loss, just to think that in this life we will never see them again,” said Ramos.

As part of the nationwide memorial, several buildings in downtown Seattle Tuesday evening were illuminated in light amber to commemorate the toll of COVID-19 on American lives.

The City of Seattle issued a statement on the memorial:

"The inauguration of President-elect Joe Biden and Vice President-elect Kamala Harris represents the beginning of a new national journey. However, in the midst of a pandemic — when so many Americans are grieving the loss of family, friends, and neighbors — it is important that we honor those who have died, reflect on what has been one of the more challenging periods in the nation’s history and renew our commitment to coming together to end the pandemic. The City of Seattle is heartened to have this opportunity to reflect and remember."