After 299 days in the hospital with COVID, Oregon man returns home, just in time to celebrate 22nd wedding anniversary

"This weekend is our anniversary," said Alex Castro's wife, Amanda, wiping away tears. "I'm thankful he will be home." 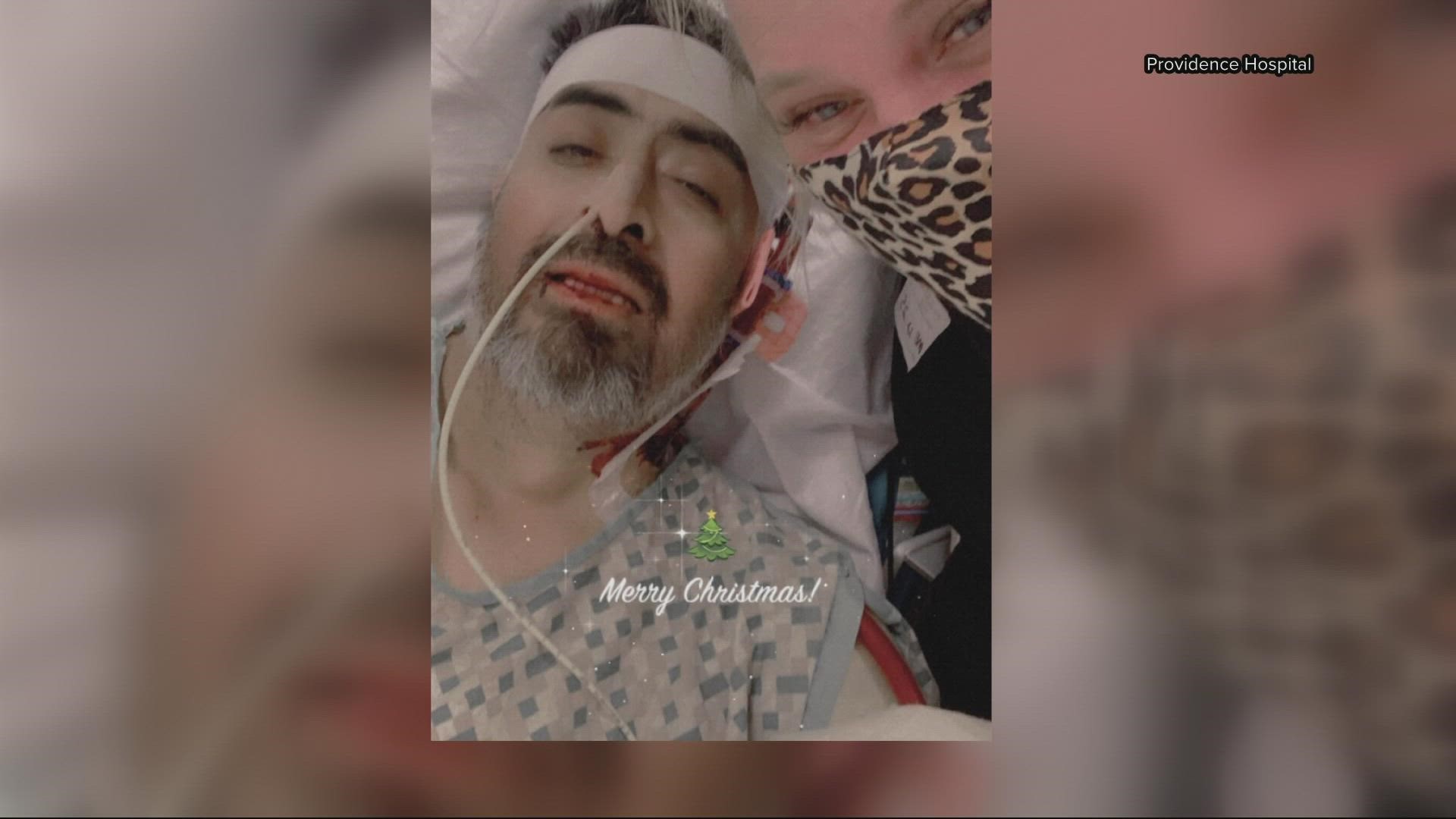 SANDY, Ore. — A man is back home in Sandy after spending 299 days hospitalized with COVID, just in time to celebrate his 22nd anniversary with his wife.

"This weekend is our anniversary. I'm thankful he will be home," said Alex Castro's wife, Amanda, as she wiped away tears.

Alex, 43, said he wouldn't have made it without a powerful will to live, which he said was fueled by the love of his family and his wife.

"I love her so much. I do. You know? I love her," Alex said from his bed in a video released by Providence.

Alex got sick with COVID over the Thanksgiving holiday in 2020. His three children also got sick, but while they got better, Alex did not. Things got bad, fast.

By Christmas of 2020, Alex was on an ECMO machine. The machine pumped his blood outside his body, filtered out the carbon dioxide, filled it with oxygen and then pumped it back into Alex's body. It's part of what kept him alive.

"It just does direct damage to the lungs, to the point they are not able to do their main job which is put that oxygen in the blood stream," Wells said. "Because there’s so much stuff in the lungs there isn’t enough room for the oxygen to get there and get into the blood."

RELATED: COVID-19 cases down, vaccinations up in Oregon

In addition, Wells said, the virus creates many little blood clots in the tiny blood vessels associated with the lungs, which makes it difficult for the blood to reach the places it needs to go to pick up oxygen for the body.

Typically, ECMO patients spend a couple weeks or a month on the machine. Alex spent 108 days -- three and a half months -- on the ECMO machine, the longest ever at the Portland Providence hospital.

For the first month, little changed according to Wells. Then, slowly, Alex's lungs began to heal. Without the machine, his doctor said, Alex would be dead.

"For a good portion of the 100-some days, if he had not been on that machine he would not have been here," Wells said.

After he was taken off the ECMO machine, Alex spent another six months in the hospital as his lungs, kidneys and other organs healed.

On Oct. 7, when Alex rode a wheelchair down the hospital hallway toward the exit, the nurses, therapists and doctors who spent more than 10 months helping keep him alive and helping him heal, where there to give him a hero's send-off.

Dozens lined the hallway and clapped and cheered as Alex rolled past, cheering the victory for Alex and for them.

Providence said it doesn't have a final bill amount that it can discuss, but a spokesperson for Providence said whatever Alex's insurance doesn't pay, the hospital will cover.

Have a comment or story idea for reporter Pat Dooris? Email him here: pdooris@kgw.com