WSP says they won't stop people from exercising their freedom of speech, but they will enforce social distancing guidelines and the ban on large crowds. 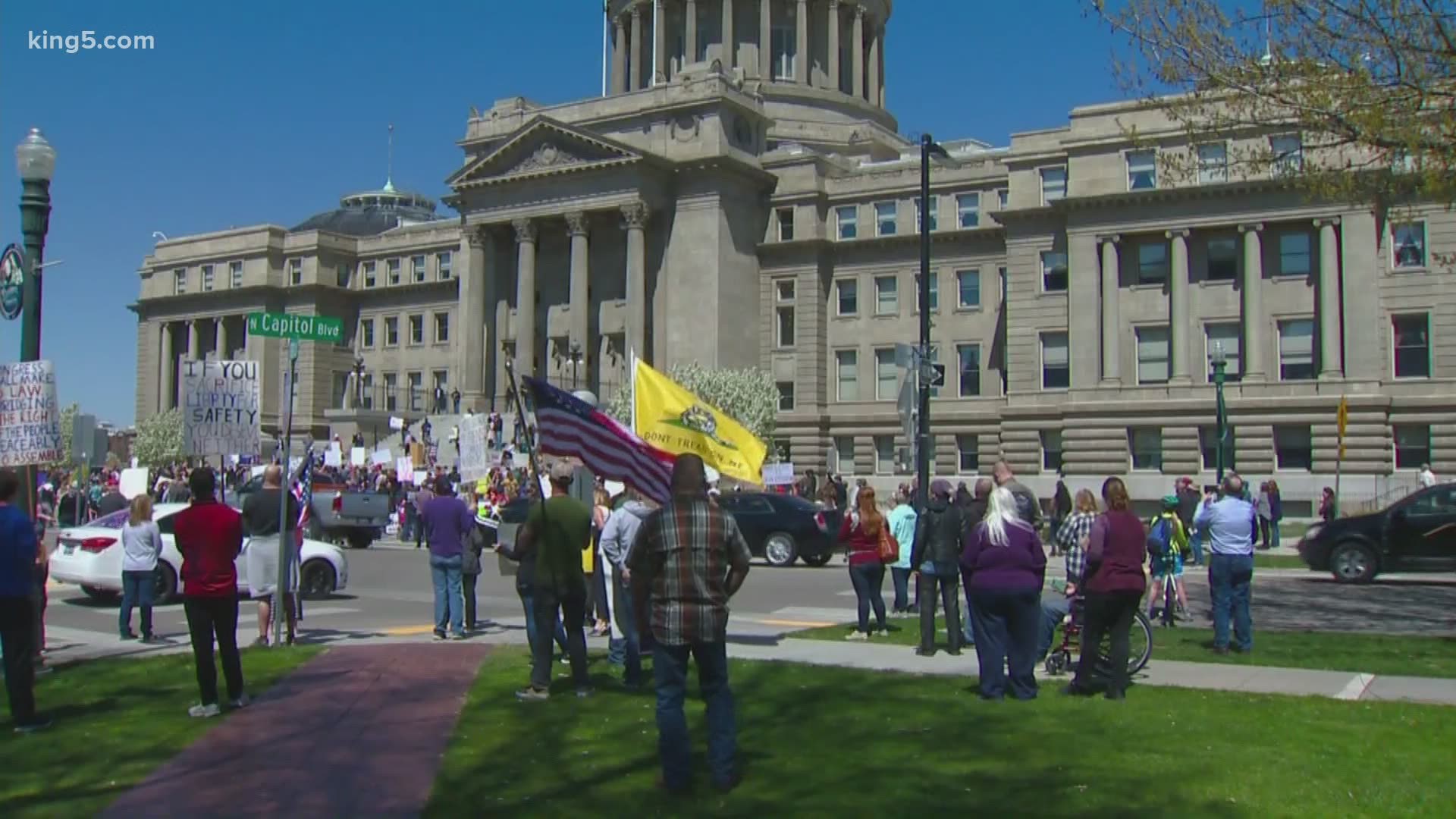 SEATTLE — Thousands of protesters gathered at the state Capitol on Sunday afternoon to rally against Gov. Jay Inslee's stay-at-home order that is in effect in Washington until at least May 4.

The peaceful protest started at the Capitol steps and drew a crowd as far down as the Tivoli Fountain.

Tyler Miller, the event organizer said he understands the public health concerns and agrees people need to take precautions, but the stay-at-home order takes it too far.

Miller decided to plan a protest in Olympia after his letters to the governor went unanswered.

"That's when I said okay, he's not responding to reasonable communication, let me maybe dial up the temperature and see if he'll respond to a lot of people saying the same thing," Miller said.

Miller said waiting until May 4 to reopen the state is unrealistic.

In a statement, Inslee said, in part:

“I hear every day from people who want to go back to work, open their businesses and spend time with their friends and family. Most of them are doing what must be done first to accomplish that: They’re staying home.

"These are difficult and frustrating times. I understand the urgency of this crisis. However, this is not the time to halt the progress we have made. I encourage everyone in our state to stay home, stay healthy and, if you need to go out, practice adequate physical distancing...

“I support free speech. But crowd counts or speeches won’t determine our course. This isn’t about politics. It can only be about doing what is best for the health of all Washingtonians.”

Organized on Facebook, the protest aimed at the Governor drew support from many right-wing supporters.

The rally was short on speeches but full of people who were carrying homemade signs.  There were also potential gubernatorial candidates and Inslee challengers mingling with the crowd. Tim Eyman, a career anti-tax activist, was wearing black gloves with no mask and posing for pictures with protestors.

Many, including Eyman, argued the closure of non-essential businesses is unconstitutional and one that will devastate the economy.

Yet some people were just looking to make a personal statement.

A passionate Wayde Hager, of Vancouver, says he drove to the Capitol because he couldn't get an answer to his letter to the Governor.  "My wife needs cancer treatment, specifically a biopsy. She's been waiting almost two months now, can't get into a doctor, for cancer," he said, as he held two flags outside the Capitol.  "I've written the Governor, I've written to my State Senators, begging them to open up."

Marlene Bruker, of Gig Harbor, said she understood the state's initial lockdown orders. She was wearing a mask as she stood with a simple sign that read "Reevaluate and Reopen".

"There were a lot of unknowns when we started, a lot of unknowns so I can't fault anybody," said Bruker, who was clearly maintaining social distancing as she spoke.  She said she would just like to see the Governor lay out his vision for restarting the economy.  "A lot of us would like to see a plan for what is the criteria for how we reopen?"

Mounting frustrations are fueling protests across the country. On Friday, hundreds gathered in Idaho and Minnesota. In recent days, sign-waiving crowds also descended upon the Capitol in Michigan.

“I don’t really know what the whole picture of this virus is but I do know that our government should allow us to take risks should we choose to do so," one protestor said.

New projections on Friday from the Institute of Health Metrics and Evaluation showed social distancing has been working and needs to continue in Washington state to limit the spread of the coronavirus.

When asked about the public health concern and the possibility of the virus raging back if people start to gather again, Miller said, "there's no denying that it's a concern, and it needs creative and innovative responses."

Washington State Patrol said they won't stop people from exercising their freedom of speech, but they will enforce social distancing guidelines and the ban on large events.

Protestors at Olympia say they're ready to go back to work, even if it means putting themselves at risk – a decision they want to make for themselves.