Gebbers Farm Operations is facing one of the largest workplace health and safety fines in Washington state history. 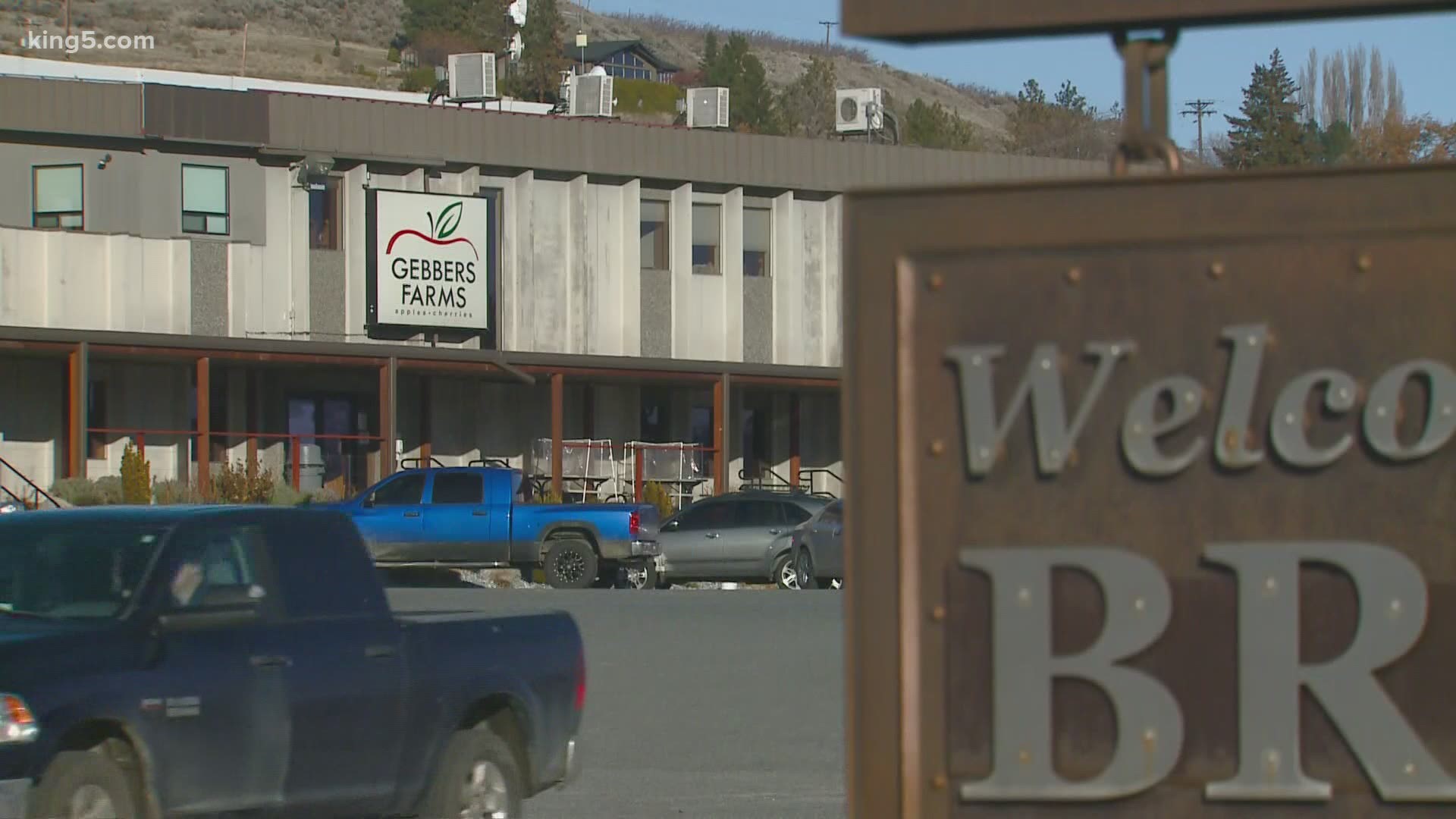 BREWSTER, Wash. — A farming company in Brewster, which is located in Okanogan County, is facing  fines totaling more than $2 million from Washington state regulators after an investigation into the COVID-19 deaths of two workers.

The Washington State Department of Labor Industries (L&I) announced on Monday that its investigation found "dozens of health and safety violations" committed by Gebbers Farm Operations. The company is facing a fine of $2,038,200, one of the largest workplace safety and health fines in state history, according to L&I.

“Gebbers made it very apparent to investigators they had no intention of following the rules as written regarding temporary agricultural worker housing and transportation,” said L&I Director Joel Sacks.

The agency's Division of Occupational Safety and Health (DOSH) opened an investigation on July 16 after receiving anonymous calls from Gebbers employees.

The first caller said someone at the camp had died from COVID-19, adding that workers who shared the same cabin with the person were not tested for the virus and were then split up into different cabins with other migrant workers, according to L&I.

The second caller said he feared that hundreds of workers at his camp had COVID-19, including himself, and he worried that he would die. He added that the farm owners did nothing to help the sick.

Investigators confirmed that the death of a 37-year-old temporary worker from Mexico on July 8 was not reported to DOSH as required, L&I said. Businesses must report any workplace-related deaths within eight hours.

A second worker, a 63-year-old man from Jamaica, collapsed and died on July 31.

The cause of death for workers was COVID-19, according to L&I.

Gebbers Farm Operations was the subject of two L&I investigations in less than two months.

L&I first opened an investigation into Gebbers on May 28 after receiving a worker complaint, which resulted in a $13,200 fine issued to the company for not ensuring adequate social distancing. Employees were using the top and bottom bunks while not using a cohort and no barriers were present in the kitchen and cooking areas, according to L&I.

L&I explained the details of emergency temporary agricultural worker housing rules and the changes needed for the farm to in compliance.

During the second investigation, L&I issued an order Order and Notice of Immediate Restraint to the farm on July 22, requiring immediate COVID-19 safety and health rule compliance.

Under state emergency rules for temporary agricultural worker housing, top and bottom bunks can only be used if a farm separates workers into group shelters known as cohorts. Those groups of no more than 15 workers must live, work, eat, use shower and cooking facilities and travel separately from other workers.

Investigators confirmed hundreds of workers were sleeping in bunk beds and not instructed to remain in cohort groups, according to L&I. Gebbers also bused workers to the fields in groups significantly larger than allowed.

“Gebbers continually failed to comply, even after the first worker died and our repeated presence at the farm, clearly demonstrating a lack of regard for worker safety and health,” said Anne Soiza, L&I assistant director for DOSH.

The investigation found a total of 24 egregious willful violations, L&I said, including 12 for unsafe sleeping arrangements and 12 for unsafe transportation. Each of the violations was assessed a fine of $84,000.

According to L&I, the farm was also cited for four other serious violations, including failure to report the worker's death.

Gebbers released a statement on Monday, saying the company is "deeply disappointed by the agency's announcement."

"There is nothing more important to Gebbers Farms than our workers’ health and safety, as evidenced by the fact that 99.3% of our entire workforce tested negative for the virus, which is better than county, state and national rates to date. While we cannot comment on the specific violations because we are evaluating our options to appeal, we strongly disagree with the agency’s assessment," the statement reads in part.

Management said in the statement that it had already established cohorts of 42 people before the state set a 15-person cohort rule.

"We consulted experts to develop our program, and there is nothing magical about the number 15. Considering that the state recommended size for community group gatherings is far fewer today than at any other time in the year, and community cases are rising," the statement reads in part.

Management said later in the statement that the company is "deeply saddened by the loss of our team members and long-time workers who we considered family."

Gebbers has 15 days to appeal the violations and penalty of more than $2 million.