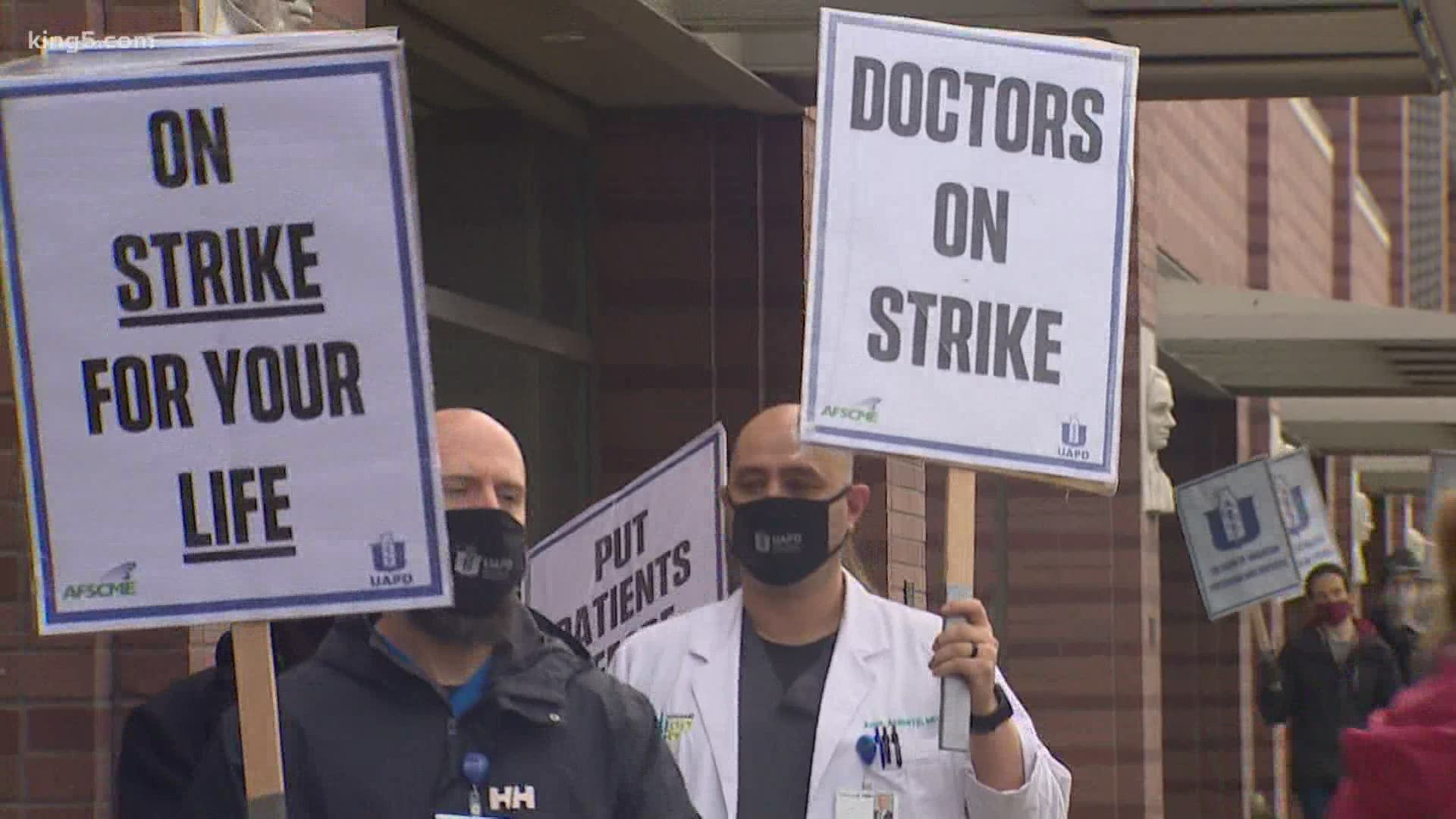 Medical workers are on the front line with a message — this pandemic is not over. Many fear the worst is yet to come and went on strike Monday to send a message to their employer.

Doctors, nurse practitioners and physician assistants at MultiCare Indigo Urgent Care facilities across 20 locations are on strike through Tuesday. They say they are working long hours and want their employer to provide additional personal protection equipment.

“The worst is coming still and I think a lot of us are worried about it. Especially after Thanksgiving and the few weeks after that,” said Dr. Amir Atabeygi, an employee of MultiCare Indigo Urgent Care from the picket line outside a Tacoma urgent care.

Despite the strike, the majority of the clinics were able to stay open on Monday because a majority of workers remained on the job, a MultiCare spokesperson said on Monday.

Workers protested over claims that staff are asked to work excessively long hours and proper personal protective equipment (PPE), like N95 masks, are not provided. The union says the conditions put patients in jeopardy.

N95 masks are considered superior by the CDC in protecting the wearer from small airborne particles.

MultiCare says all facilities have adequate PPE and that it’s confident its staff is safe.

The Union of American of Physicians and Dentists, which represents physicians, nurse practitioners and physician assistants in Washington announced the plans to strike on Nov. 12.

In a written statement issued today, MultiCare said it issued a formal proposal over the weekend which would have allowed both parties to continue talking and avoid a strike.

The union turned down the offer, according to MultiCare.

“PPE shouldn’t have to be part of a contract. It should be something that an employer provides,” said M.C. Nachtigal a nurse practitioner who’s also on strike.

MultiCare said its facilities and clinics will be open to patients during the strike, which applies to 20 Indigo Urgent Care clinics.

The strike follows a coronavirus outbreak at MultiCare Auburn Medical Center that resulted in the death of two patients. More than a dozen patients and 12 staff members tested positive for COVID-19 between Nov. 5 and 20 in the outbreak in the memory care unit of Behavioral Health.

"The recent outbreak of COVID-19 within MultiCare's hospital system should have been a wake-up call, but it was not,” Dr. Stuart Bussey, union president, said in a statement.

Doctors and nurses fear being overworked and under-protected as the case load possibly increases heading into the holidays.

“It’s quite frustrating actually, to be honest with you. At all of our clinics, our numbers have drastically increased over the last few weeks. Some places up to 50% more than it used to be… all of the extra volume is COVID-19 patients,” Atabeygi said.