After a teenage girl tried coming into Cold Stone Creamery in Leavenworth without a face mask and was refused service, the girl's mother had it out with an employee. 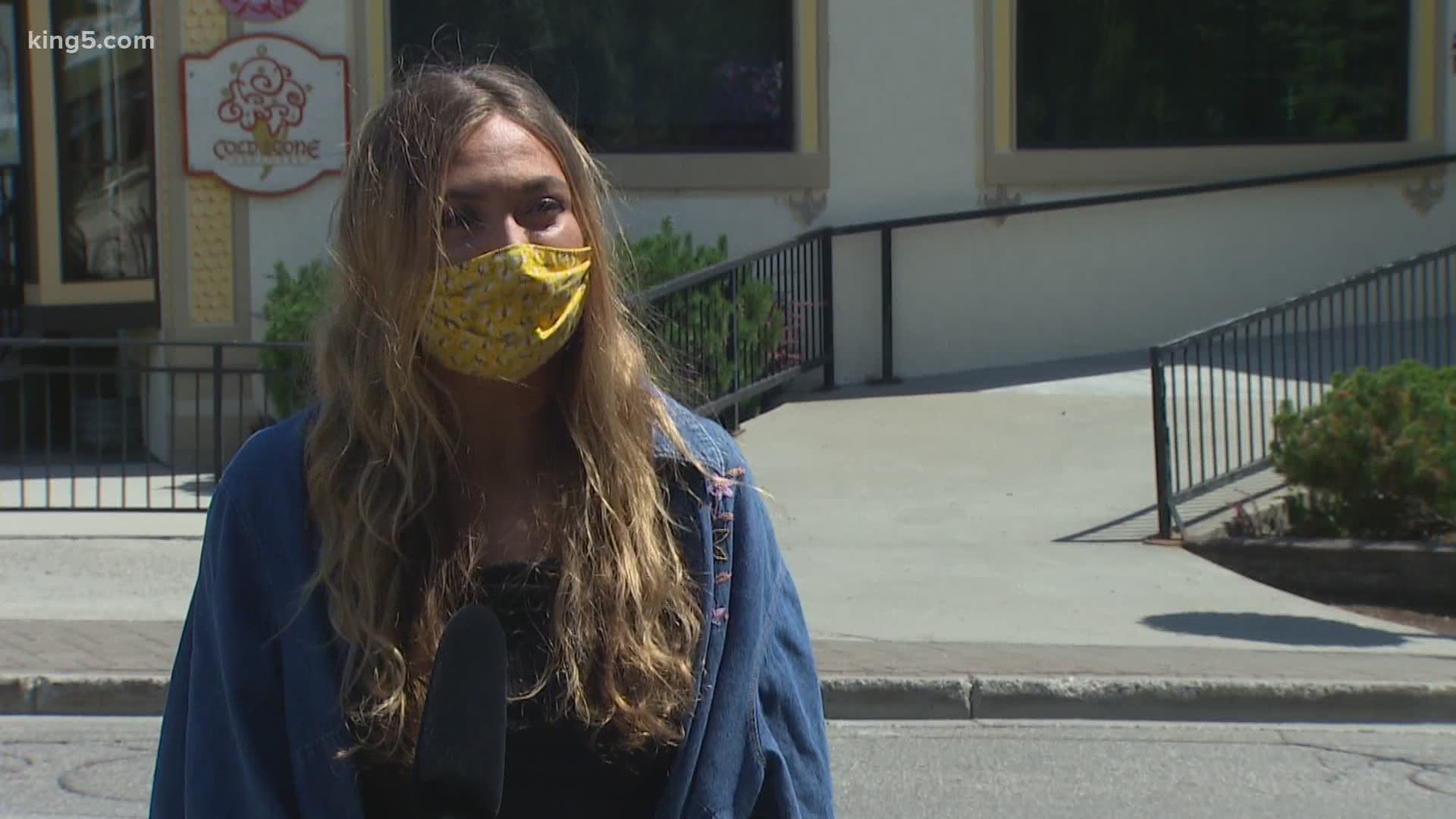 LEAVENWORTH, Wash. — It started with a simple stroll to get some ice cream in Leavenworth and ended with a mother's meltdown and an employee getting fired.

"You discriminated against my kids!" Yelled the woman in a Facebook video posted on iFiberOne.com. "My kids had their faces covered. They came here wanting ice cream and you kicked them out after waiting for 15 minutes in line with their faces covered!"

On Saturday, workers at the Leavenworth Cold Stone Creamery said a teenage girl came into the store and was refused service because she was not wearing a face mask, a policy posted on the door, and now required by state law.

A couple of hours later that girl's mom came back, camera rolling, and argued the girl should have been served because she had her shirt pulled up over her face.

The state law went into effect last week requiring face masks to be worn in public places, or "several layers tied around a person's head." The law makes no mention of shirts, scarves, or other clothing.

Cold Stone worker Paris Allred came from around the counter to confront the customer and defend her co-worker who was the target of the tirade.

Shortly after that altercation, Allred got a text from her boss saying she had been fired.

"I don't regret sticking up for my coworker," the 21-year-old told KING 5. "She was just trying to do her job."

Cold Stone said Allred was not fired for enforcing the mask rule. Rather, it was her comeback that was apparently a bit too salty for the sweet cream company.

Below is a transcript of the conversation from the video:

ALLRED: "If you have a problem with that then don't come to the store."

CUSTOMER: "We won't. I'm from here and I will make sure that everyone in Leavenworth knows that you discriminated against kids coming in here to have ice cream."

Cold Stone media relations sent a statement to KING 5 stating, "What happened in the Leavenworth store last Saturday evening was very unfortunate for all parties involved. In these unprecedented times, the situation escalated quickly. Due to the unfortunate interaction between the employee Paris Allred and the customer, decisions were made regarding Miss Allred’s employment status. We want the community to know, Miss Allred was not fired for enforcing the state mask order. We are very proud the Cold Stone Creamery Crew Members handled the situation by properly enforcing the face-covering order set by Governor Inslee."

"I definitely could have handled the situation better," said Allred. "I would have just tried to keep my cool. I wouldn't have let her get to me. I think she came into the store looking for a fight and I gave it to her."

In a Facebook message to KING 5, the girl's mother, Michelle Logan of Leavenworth reiterated her belief that her daughter was properly covered.

She went on to blame "leftists" who have created what she called a "hostile environment in Leavenworth" for conservatives.

Allred said she doesn't want to deepen the divide over mask-wearing in America, she just wants people to be more understanding of each other.

"It really is just about mutual respect. We're in the middle of a pandemic with a lot of new laws and regulations arising. It's especially difficult for us who are expected to enforce those regulations. It puts us in a difficult situation," she said.

Cold Stone stated Allred has now been offered her job back. She has also received other offers from employers in town.

"I'm just really grateful for the support from this community."