Inslee unveiled a four-phase approach to reopening the state, with at least three weeks passing between each phase. 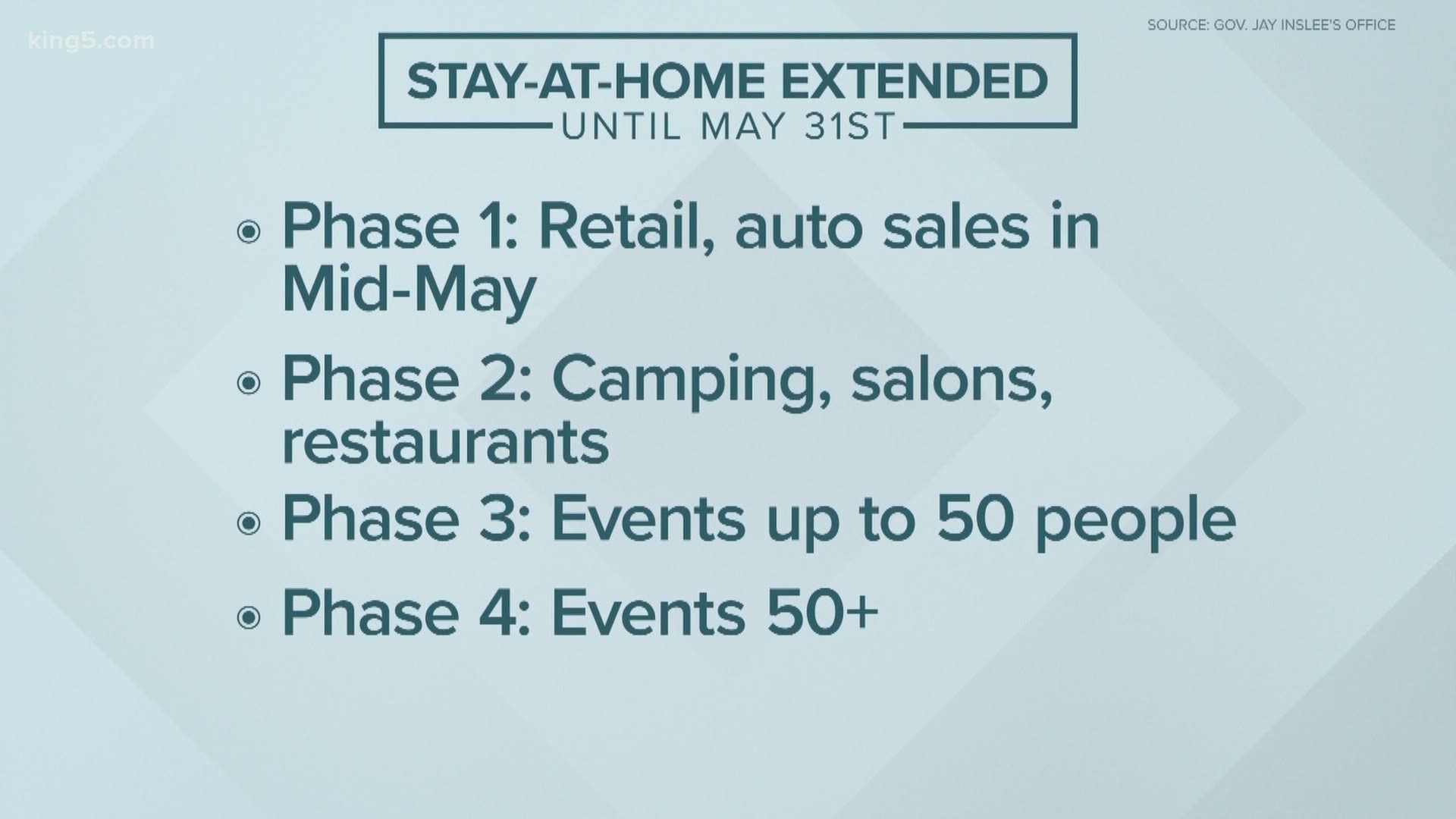 He unveiled a four-phase approach to reopening the state. Each phase will still require social distancing and continued health precautions.

"We have not won this fight against this virus," he said.

The three-week timeframe would "allow us to evaluate whether what we've done has worked or not or whether it's increased danger," he said.

"This phased approach does recognize the economic circumstances of our state, and the need to not have more fatalities, and not have children infected so we have to close many many schools," he told reporters.

Inslee's announcement comes amid a growing chorus of people pushing for decreased restrictions due to the economic struggles resulting from the stay home directives.

But, drawing the comparison to a parachute, he said the pandemic is not over for Washington state.

"We have been successful to date in slowing the progress of this disease, but if we cut the straps right now, we’ll have a really really bad result hitting the ground," he said. "The epidemiologists tell us very clearly this is just going to be come right back up and bite us if we don’t continue efforts that are significant and aggressive in our state."

Inslee said the state will evaluate on opening up based on the amount of disease activity, risk to vulnerable populations, testing capacity, health care system readiness and having enough staff to conduct case and contact investigations. The state has posted the status of these factors on its COVID-19 Risk Assessment Dashboard.

He also said that counties with smaller populations and low numbers of cases and can also explore possibilities of moving to phase two earlier than the rest of the state. Those counties include Columbia, Garfield, Jefferson, Lincoln, Pend Oreille, Skamania, Wahkiakum, Grays Harbor, Kittitas and Ferry.

The plan drew criticism from Senate Republican leader Mark Schoesler (R-Ritzville), who said in a prepared statement the plan does not open businesses fast enough.

"Governor Inslee says he wants to bet on success, not failure, yet he apparently believes the majority of Washington employers would fail to protect their employees and customers if they were allowed to reopen anytime soon. That’s a disappointment. Republicans believe these businesses would follow the steps we’ve seen grocery stores and big-box stores and others take," he said.

"We have to remember that there are significantly more cases in our community now than early March when we began restrictions. We know it is still far too early to take our foot off the brake on our response to this disease or we risk an exponential resurgence of the virus. Every one of us must continue physical distancing until our infection rates have dropped significantly,” Durkan said in a prepared statement.

Inslee first issued the stay-home order in late March, as a response to the area outbreak of coronavirus, which has killed more than 800 and sickened more than 14,000 people in Washington state in the past three months.

The order kept schools closed, shut many businesses and banned gatherings as a way to try to slow the spread of the virus, which causes the respiratory disease COVID-19.

Health officials say the measures appear to be working. As planned, the rate of daily cases and deaths has dropped since the virus first hit Washington state.

However, the social distancing measures have also hurt workers, as people have been barred from their jobs or have lost business because people are staying at home. State unemployment has spiked since the start of the outbreak in Washington state.

Inslee's extension was not unexpected. On Wednesday, Inslee announced Washington's "Stay Home, Stay Healthy" orders would extend past May 4.

Some industries like certain construction projects, elective surgeries, fishing, and golfing have benn allowed to resume soon, with modifications.

Inslee said that he would announce "the next phase" of reopening Washington state during Friday's announcement. There is talk that areas, where there are fewer COVID-19 cases, will have restrictions eased.

RELATED: Washington's stay-at-home order will extend past May 4; no reopening date set

An official agenda of the governor's announcement has not been released.

Inslee said Wednesday that while coronavirus deaths and hospitalizations were declining in April, the numbers are not low enough to ensure that those numbers will continue to decline.

His entire briefing is available on KING 5's YouTube Channel.