KING 5 poll: Majority ready for stay-home restrictions to be modified

More than 70% of respondents say they are 'completely' following social-distancing guidelines, though the number who believe restrictions are too much has doubled. 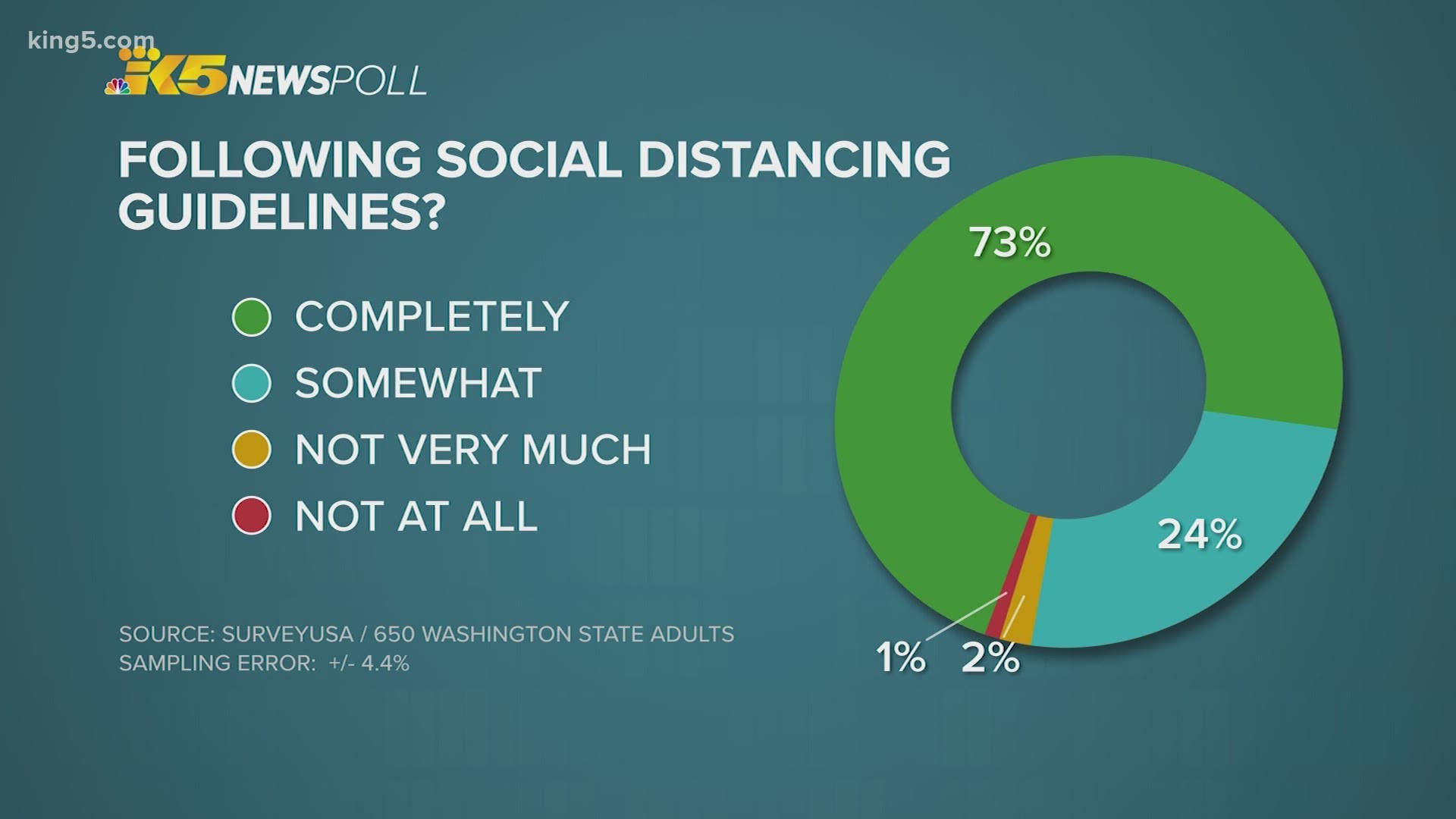 WASHINGTON — A majority of people who took an exclusive statewide KING 5 News poll say they are still "completely" following social-distancing guidelines to reduce the spread of coronavirus.

Residents also continue to give health officials high marks for their response to the pandemic. However, the percent of Washingtonians who feel the state's lockdown is an overreaction increased from 9% to 19% compared to seven weeks ago.

Though 73% say they are following guidelines, 64% also believe restrictions should be gradually modified "slowly over time" so parts of life can return to normal, while 21% want restrictions lifted immediately. Another 11% want to wait until there is a vaccine before things return to normal.

“I think modify means we're going to gradually reopen and look at what businesses can open safely. We've already done that in many ways. You know, we've small construction projects have opened, we started retail curbside service,” she said.

On Tuesday, state officials announced an additional 10 counties could apply to loosen restrictions ahead of some of the more populous counties. Phase 2 of the state's four-phase approach to loosening restrictions allows for increased outdoor recreation, such as camping, small group gatherings of five people or fewer are allowed, and more. The eligibility comes from new criteria, based on guidelines from the Centers of Disease Control, according to the state Department of Health. Counties are now eligible to apply if they have fewer than 10 new cases per 100,000 residents over a 14-day span, the agency said.

Meanwhile, 55% say they are following stay-home orders. But when people do go outside, 52% say they always wear a mask while in public. 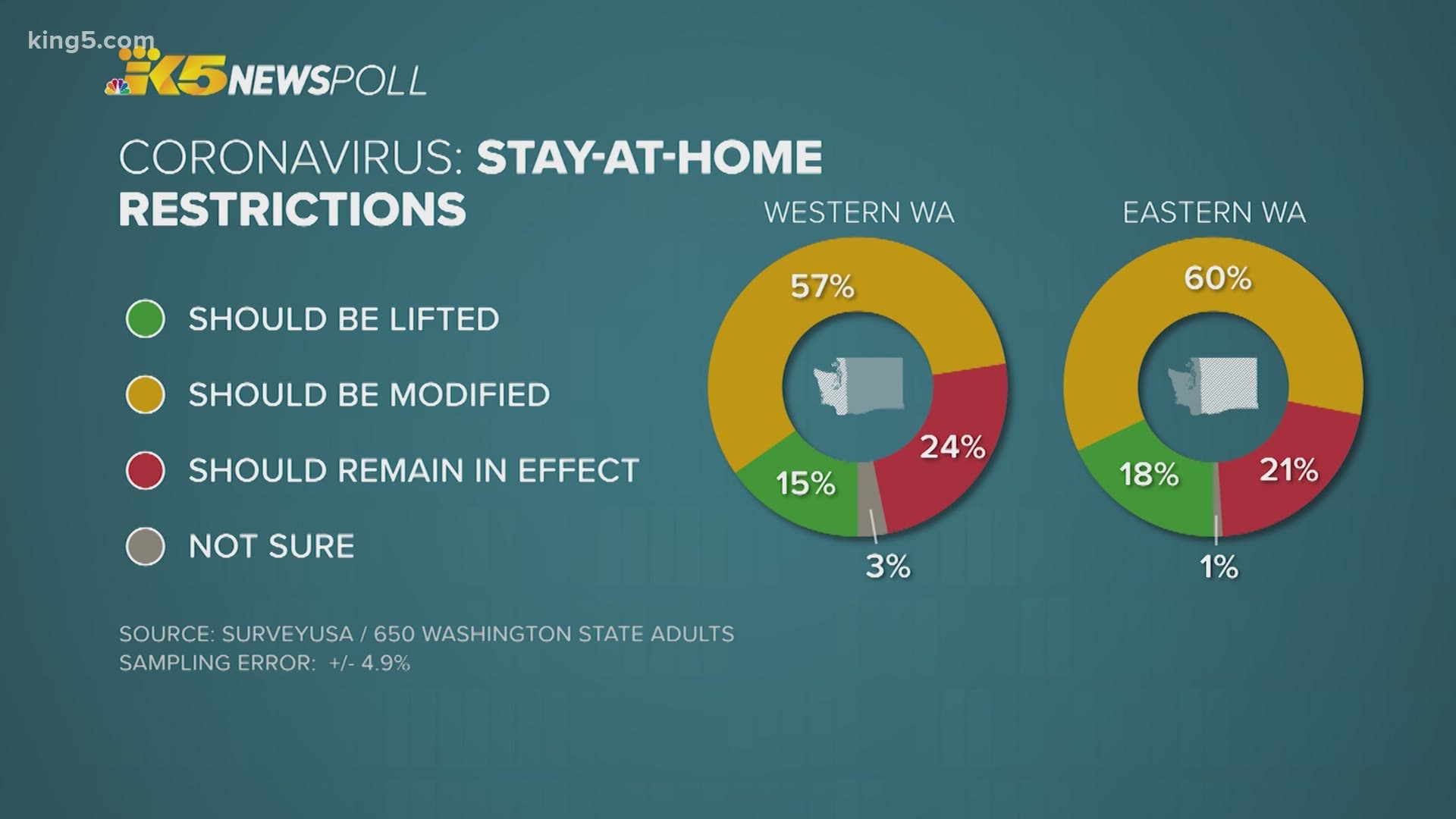 “It's going to take time and particularly until there is a vaccine available," said McClellan, a former Bush White House Press Secretary. "I think that the public is willing to give a lot of leeway to our deference to the governor and state and county health officials."

“I don't know anyone who would raise their hand and say, 'Oh, I like what we're doing right now,'" added Sims, who is the former three-term King County Executive and Obama deputy director of Housing and Urban Development. "I want it to be for all of us to go back to normal, but we want to go back to normal safely. And I think that that's what the polls are saying."

Of the 556 adults who took the survey who are registered to vote in Washington state, 20% say they know someone who was diagnosed with coronavirus.

Sims said Inslee's response to the coronavirus crisis has earned him support among Washington residents.

"(Inslee’s) numbers have actually gone up in large part because how he's managed the coronavirus here. And the procedures you've put in place for social distancing, which a lot of people supported it in that poll. And so I see that surge was from where he was several months ago to now I think that he is undefeatable, and I also believe that he has a lot of momentum," Sims said.

“People really want to rally around leaders in times of crisis. The governor is seized upon that sentiment by following through with strong crisis leadership, and it's reflected by what is it 32 point jump in his approved to disapprove rating, job approval rating,” McClellan said.