I had to get a biopsy after a mammogram. Here's what it was like.

If you've ever had to go back for a biopsy after a mammogram, you know it can be an anxiety-inducing experience. Here's what happened to me. 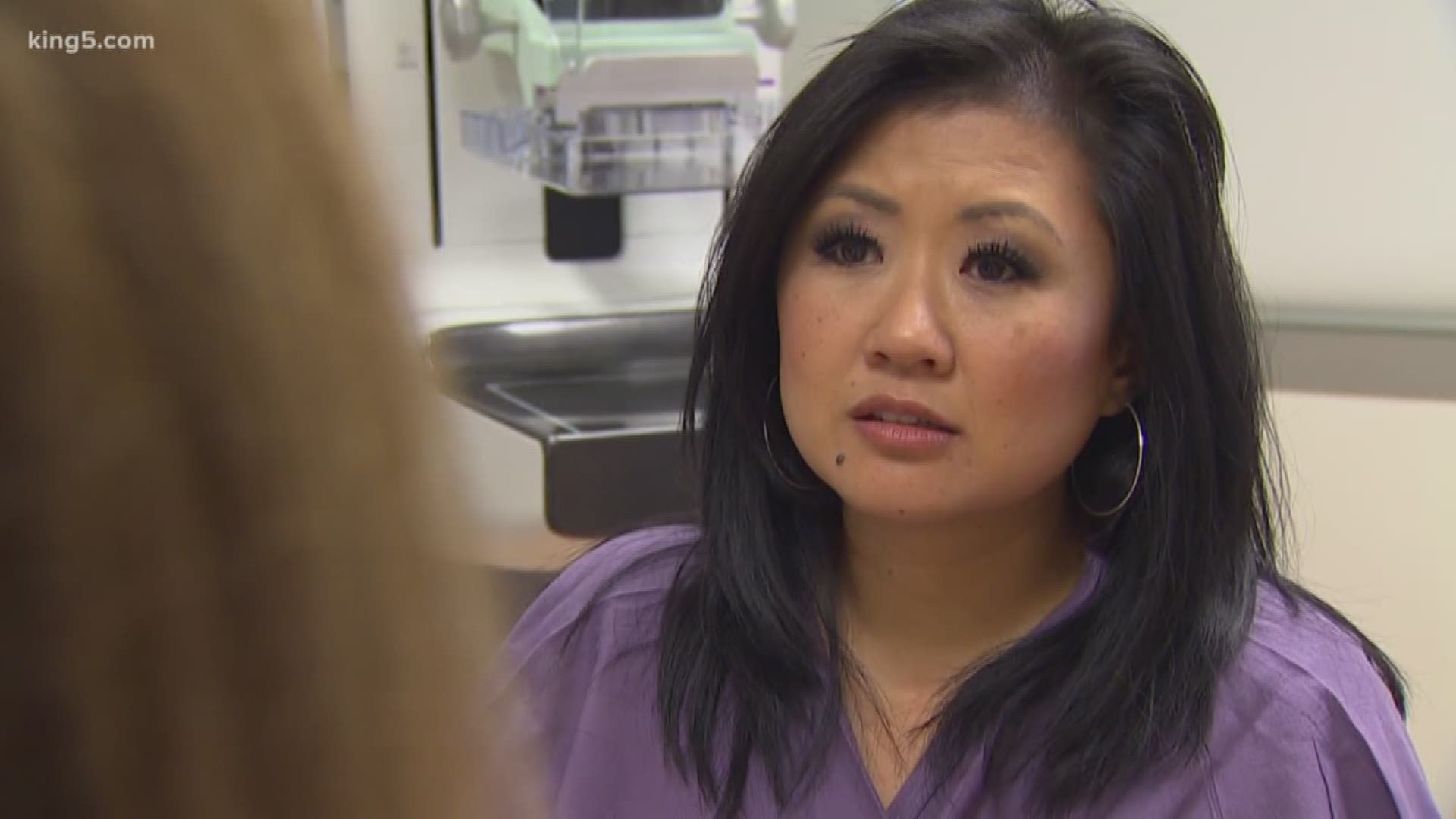 SEATTLE — As soon as I turned 40, I decided to get a mammogram. I did it for a story, because it made sense during National Breast Cancer Awareness Month. Even though I know there are different thoughts on the age to start getting screened, I wanted to do mine as soon as insurance would cover it.

I wasn't expecting my mammogram to come back with a spot that needed clarification. I think there was a part of me that thought my health could suffer no consequences if I covered it through the lens of journalism – that is often how we take our emotion out of most stories anyway. In my mind, the veil of doing it for work meant a mammogram's results couldn't interrupt my actual life.

The radiologist said I would need to come back for a biopsy because of some questionable calcifications in my right breast. They were detected thanks to a 3D mammogram. Every woman I trust recommends getting the 3D because there are times cancer cannot be seen on a 2D. I've heard doctors on our news say that ultimately screening is the most important thing we can do, whether that's 2D or 3D. However, if we're talking as friends, I say ask for the 3D first. By Washington law, doctors have to notify you if you have dense breast tissue – even more reason to get a 3D mammogram, because cancer can blend in with the surrounding tissue.

RELATED: I turned 40 and got my first mammogram. Now, I have to go back for a biopsy.

As soon as the radiologist saw the calcifications, I was able to set up an appointment for a biopsy. We scheduled it for more than a week away. That's a week of thinking worst-case scenarios, like, "What would happen if I had breast cancer? What would my husband do without me? Is it possible my son could grow up without me?"

And then there were a lot of other thoughts that popped up in my head like, "There are so many survivors. We have great resources all around us. You have a tribe to lean on. Be the fighter you see in others."

I will admit I was worried, but I wasn't letting it consume me. It's just that every now and then those thoughts would creep back up in the back of my mind, and I would squash them immediately. I pretended they were not there. But let's be honest...they were there.

On the day of my biopsy, I went to work as usual and walked into the Swedish Breast Imaging Center. I had to pump, because even though I am weaning, I am still breastfeeding for the night feeds. When you get to the room, you have to lay down on a table and put your breasts through a hole in the table. Think of it as a massage table but without the coziness of a warm blanket or the comfort of a head pillow. You're just rocking out with your boobs out, though it feels more dignified than that.

You have to get a mini-mammogram so the doctor can pinpoint the area for biopsy. They wipe your breast with a numbing wipe, and before you know it, you're getting a numbing shot like the kind you receive at the dentist. The next thing I remember is the doctor vacuuming out the breast tissue. The whole process might have lasted five minutes, and it was virtually painless. Instead, I noticed how nervous I had been, because halfway through the biopsy I realized my body remained clenched, and I wasn't breathing. A big gulp of air brought me back to reality.

I had to remain on the table for a little longer than usual because I wouldn't stop bleeding. I asked, "Was the needle big? I wish I could've seen it." And the general answer was something like, "It's pretty big. You probably don't want to see it." Yeah, probably not. The needle likely hit a blood vessel which kept me from clotting immediately. It only took a few more minutes to get it under control.

I asked to see my breast tissue. I don't know why I thought it would be microscopic, but what I saw actually shocked me. This may sound grotesque, but it was like looking at five or six slivers of ground turkey. If I'm being completely honest, I thought about meat in a whole new way. The sample was put away in some vials, and I went on my way to get another mammogram.

The doctor said she would call me in a few days with results – take note, if you want to get faster results, avoid getting a biopsy at the end of a given workweek, because a weekend will automatically add two days of waiting.

My doctor called the next day. Also, take note – the doctor will not leave a good or a bad message, just a "Hi, call me back with your results" kind of message. I asked her if she'd leave a message if the results are good, but she said no. So when I missed the call, I immediately called back, and of course, she had already moved on to another patient.

"Your results are good!" she said.

Or something like that. I really don't know, because my mind was spinning. The rest went something like this, "You had a ruptured milk duct and that calcified. Do you remember having some clogging?"

"I think so, but it was like at the beginning of my maternity leave – when my milk was just coming in," I said.

"It was probably at least six months ago?" she asked.

"Or more like 10 or 11 months ago," I said. "I really haven't had any problems since the beginning."

"Okay, well it's all clear and there's nothing to worry about," she said.

My husband and I looked at each other in relief, and he left the room. I laid down on my bed and sobbed.

Anxiety is a real trick. I was scared out of my mind, but I wouldn't let myself feel scared for long. And to find out it was just a clogged milk duct? It's like going in for a colonoscopy only to realize you have hemorrhoids, which happened to someone close to me. It's a great scenario and a letdown at the same time.

So what they don't tell you is that your boob is pretty beat up after a biopsy. It's not a deterrent for getting one done, but at the same time, it took a little chunk out of my breast, and I'm pretty sure there's going to be a scar. On top of that, the tape used on my breast after the biopsy somehow rubbed on my bra during the 48 hours I was supposed to wear it, and it left four small blisters on my breast and tore off skin. I am two weeks removed from my biopsy and also have some scabbing and potential scarring.

Let me make clear though – I'm not complaining. It's just something someone should know if they've never experienced it. It's more than a little needle going into your body and pulling out a microscopic piece of tissue, which is what I had told myself before the procedure.

For a couple of days, I continued to have blood in my breastmilk. The doctor said the pink-tinted milk was safe for my baby to drink, but I accidentally stumbled on a fix to get rid of the blood through refrigeration. After pumping and placing the milk in the refrigerator, I realized that the blood separated from the milk when it got cold. Instead of pink blood, the milk turned back to its vanilla color with red dots -- talk about weird science! So, I went ahead and filtered it through a coffee filter and gave it to my son.

Breastfeeding can create extra density in the breast tissue and makes it a little more challenging to look through, according to Laura Roberts of the Swedish Breast Imaging Center. It can also be quite common to have calcifications in the breast, and most are benign, she says. Some calcifications get ignored, some are followed, and others are biopsied.

I never had to stop breastfeeding throughout the process, but I did have to pump before the biopsy and the mammogram. It just makes sense to be empty while your breast is being examined. There was no interruption in my life or my baby's life during the whole process.

I'm not a medical professional, and I would never tell someone what to do when it comes to their own health. I think everyone needs to talk to their physician to figure out what works for them. However, I've told all of my friends to get a 3D mammogram as soon as insurance covers it, even though insurance levels vary. And when I shared my story for the first time, many women messaged me and said they were angry they didn't get the 3D mammogram, because a 2D missed cancer. Another woman told me she wished that 3D technology was available when she received a cancer diagnosis. In all the cases, they all wished a 3D had been available, because they believe it would've been detected earlier.

I really appreciate my experience in this whole process. The mammographers work so hard to make sure you are as comfortable as possible. I always felt like I had the support I needed, and the gentleness one would like to receive if they're scared. I was definitely anxious.

I am so grateful that I won't need another mammogram for another year, but I know that's not the case for a lot of women. I am with them in spirit. It is certainly comforting to know there are a lot of people who are intelligent, kind and gentle about this very personal issue.