'Is he going to remember me?': Wife of Shoreline Alzheimer's patient worries about impact of social isolation 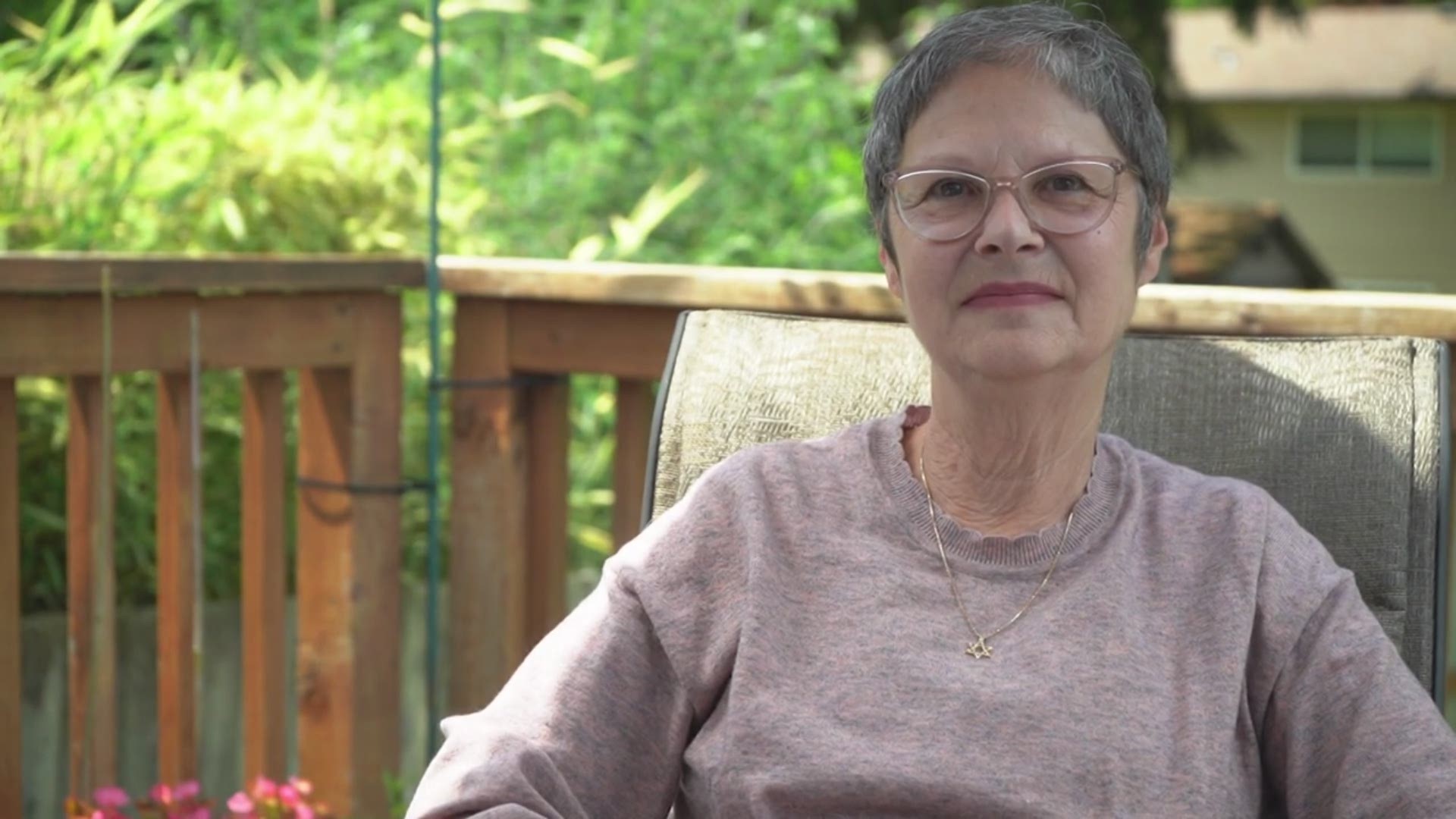 WASHINGTON — At age 52, Nancy Johnson received a diagnosis that neither she nor her husband Joel saw coming: Alzheimer's, a disease that causes brain cells to wither away and die. It's also a disease that usually impacts people age 65 and older.

"With her diagnosis at such a young age, her expected lifespan was only four to six years, with less than 50% surviving five years," said Joel Johnson.

That diagnosis came seven years ago, meaning Nancy has beaten those odds, and Joel said her doctor was impressed with how slow the disease was impacting her.

The Auburn couple attributed that to an active social schedule, as socialization and activity has proven to slow the deterioration that Alzheimer's causes in the brain.

"It has been the only thing we’ve been able to hang our hat on that we’ve done a really good job at that's hopefully prolonged her cognitive abilities," said Joel.

While support groups, activities and social outings have been wonderful outlets for both Nancy and Joel, as the caregiver, with the announcement of Gov. Jay Inlsee's "Stay Home, Stay Healthy" order in response to the coronavirus pandemic, their social calendar was put on pause.

While socializing was stopped, Joel said three months with only the fraction of mental stimulation Nancy usually had gotten has unfortunately done the opposite to the disease's progression in her brain.

"To be honest, I would say the last three months, we’ve seen the most significant decline that we've seen in any time in the last seven years," said Joel. 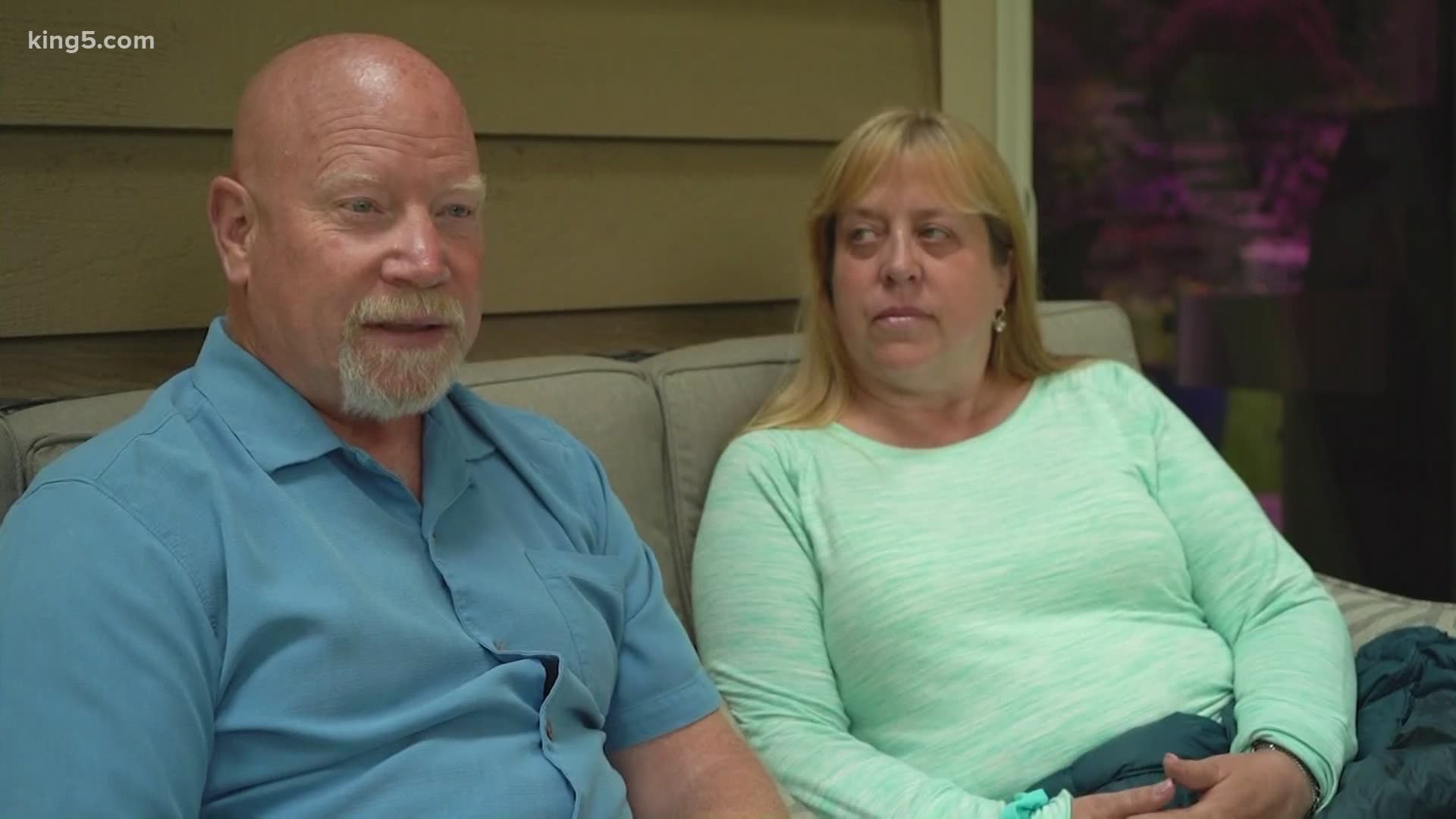 The Johnsons aren't alone. Erica Farrell, a clinical manager at the Alzheimer's Association of Washington, said she's been hearing that anecdotally from other caregivers.

"They're seeing more rapid progression during this time where everyone is more anxious and there are fewer supports," said Erica.

In Washington, there are 120,000 people living with Alzheimer's and 353,000 caregivers and care partners, like Joel who take care of them, providing 402 million hours of care this year alone, according to the Alzheimer's Association of Washington.

While resources for people living with Alzheimer's are scarce, so are resources to help caregivers. The Johnson's have a hired caregiver to help Nancy a few hours a day, but Joel is still taking on more responsibilities, which has, along with being faced with his wife's noticeable decline, added stress.

"To see the decline, to see things further lost, those emotionally aren't easy to deal with," said Joel.

Over the last seven years, Joel has found solace in a support group, but they haven't been able to meet in person since the pandemic hit the region. While the group meets virtually, Joel said it just isn't the same.

"I'm more socially isolated, I miss the conversations you get to have with other adults, [Nancy and my] conversations are different than they used to be, they don't have the depth that they were earlier in our marriage," said Joel. "Those are things you long for during this."

While people living with Alzheimer's at home and their caregivers are going through challenges during this time of social isolation, it's an equally challenging time for those with loved ones who live away from home in memory care.

In December, Paula Schwimmer made the decision to place her husband, Rafe, of almost 40 years in memory care. She hasn't been able to see him for three months.

"Is he going to be able to remember me? Not being able to see him, it feels like I've deserted him and that’s not a good feeling," said Paula, who lives in Shoreline.

Alzheimer's is Washington's third leading cause of death, according to the Alzheimer's Association of Washington. It is a disease with no cure and a 0% survival rate. In 2018, 3,752 Washington residents died of Alzheimer's.

"We’re starting to see some real impact of these past three months and I think it’s starting to get attention like this isn’t working anymore," said Lisa Mayfield, founder of Aging Wisdom, a company that helps families navigate options for aging and memory care.

She said her clients have moved from sad that they cannot see their loved ones to frustrated they can't intervene as the disease progresses.

Washington state has released guidelines for long term care facilities and COVID-19 regarding personal protective equipment and testing. Lisa said that's a move in the right direction, but she wishes the needs of those living in memory care were taken into consideration in Washington's coronavirus plan from the start.

While Paula has been able to speak to Rafe over the phone or video call, Rafe's Alzheimer's has progressed to the point where talking through any device is hard.

RELATED: Help us cover how Washington's long-term care facilities are responding to COVID-19

She's had to rely on updates from the nurses who take care of him. She said he has stopped asking about her and is afraid that, during the months of isolation, he's forgotten about her.

"It’s hard, this is so not the way I envisioned our lives to be," said Paula.

Erica, with the Alzheimer's Association of Washington, said that even though times are hard and routines have been disrupted, there are resources available for both caregivers and people with Alzheimer's.

There is a 24/7 helpline that caregivers can call day or night to talk to someone for issues like crisis assistance, how to find support and can act as a starting point for help. That number is 1-800-272-3900.

The Alzheimer's Association of Washington also has nearly 80 support groups in the area which are free of charge. They cannot meet in person right now, but they are doing virtual meet-ups. There are also virtual activities being offered like a zoo walk that can help stimulate Alzheimer's patients. Go to their website to see their offerings.

Erica also had some tips about how to make your time at home as a caregiver easier. The first is asking for help from friends and family.

"When asking for help, be specific if you can, it’s ok to ask for what you need, especially now, and sometimes that can help the person that you're asking. They may not always know how best to help you," said Erica.

She also suggested trying your best to add structure to your loved one's daily routine. That's one way of controlling aspects of a seemingly uncontrollable situation. Also, added routines that incorporate stress-relieving practices are helpful.

It may be hard, but staying calm is very important.

"We recommend that you do your best to be calm, especially with interactions with your loved one with dementia, these individuals can pick up on cues from people in their environment, so just making sure you yourself are creating a calm space can make them feel safe," said Erica.

RELATED: Wife of patient with early onset dementia sees change in her husband due to isolation