A study released in the U.S. revealed that heavy drinking among women rose 41% by September. Heavy drinking is considered four or more drinks within two hours. 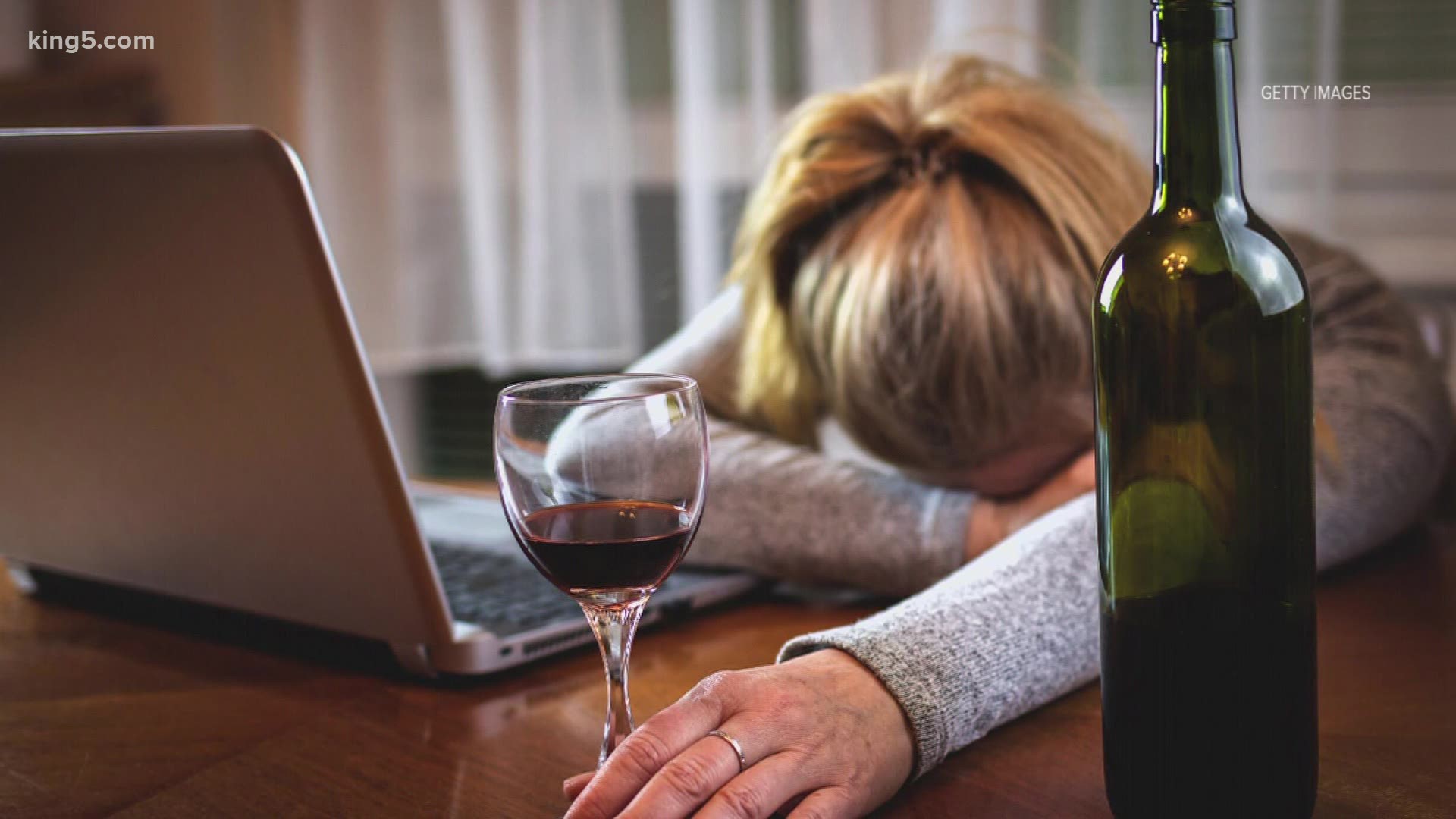 BELLEVUE, Wash. — More than five years in and Jeanne Ren is still taking her recovery one day at a time.

“I was trying to keep the plates spinning," she continued. "That day of surrender I actually have that visual that the plates finally dropped, and I was able to say, ‘I need help.’”

The self-described once blackout drunk found sobriety, went back to college and today works as a substance use disorder professional – a field that the coronavirus pandemic has overwhelmed with more people than ever reaching out for help.

“We’ve seen a big increase in drinking," said David Anderson, director of the Hazelden Betty Ford Foundation outpatient treatment services in Washington state. "We’ve seen a lot of drinking. People are doing this in their homes. Consumption is up for both men and women.”

RELATED: VERIFY: Aversion therapy: Can you drink yourself sober?

Alcohol use is up across the board no matter how you measure it. First the lockdown order. Nielsen reported a 54% increase in national sales of alcohol for one week in March compared to 2019. In April, the World Health Organization’s Europe office put out a warning urging governments to “enforce measures which limit alcohol consumption.” By September a study released in the U.S. revealed that heavy drinking among women, which is four or more drinks within two hours, had risen 41%.

“That’s become quite a common story to be hearing these days,” said Hosia Keene, a counselor for the Hazelden Betty Ford Foundation.

Keene is usually the first face a new patient sees and COVID-19 has complicated her work. Currently there are no group meetings and no in person visits – everything now is done virtually from her Seattle apartment.

“These women who typically were in a career and now they’ve had this shift where the pandemic started – and we know women are being disproportionately taken out of the work force to be primary caregivers – they’re having to do home schooling. They’re taking on a lot of responsibilities that weren’t there before,” Keene said.

These are woman who more so than ever are finding the courage to seek out treatment. At one point the outpatient center in Bellevue saw an increase of not just new clients but those who had relapsed during quarantine. For a period of time, the Bellevue facility saw an increase of around 80% in new total patients, according to Anderson.

“We were very busy," Anderson said. "We couldn’t provide enough services, enough spots for some of our patients."

It's also an industry that like so many others was forced to adapt.

“We pivoted 1,500 patients across the country into virtual care in one week,” Ren said.

Patients are now receiving treatment from living rooms and home offices across the state.

And as we move closer to a vaccine experts fear that the impacts of coronavirus will linger long after we’ve eradicated it.

“What I think we’re starting to think about now with opening back up is this backlash of people that have been cooped up for a very long time and are now going to be thrown back into the world, and a lot of those skills that keep us grounded in the day to day have slipped away,” Keene said.

It's a reminder for Ren to take her sobriety seriously.

It's a new way of living she hopes to share with others whenever they ready.