'I'm not the protagonist anymore." Mark Hamill says fighting the dark side a young person's game

Mark Hamill talks about Luke Skywalker's return to Star Wars, how The Last Jedi is full of tragedy and setbacks, and how much he misses his on-screen sister and off-screen friend, Carrie Fisher. 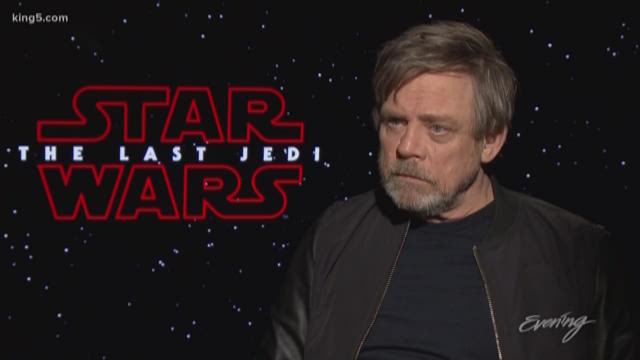 When we watched The Force Awakens and saw Mark Hamill at the very end, there was an audible gasp at early screenings. Luke Skywalker looked like he had a rough couple of decades since he lost his hand in 1983’s Return of the Jedi. Hamill is now in his mid-60’s and appears to play Obi-Wan to Daisy Ridley’s Luke.

Many of us are hoping, in The Last Jedi, we find out what Luke Skywalker's been up to for the last however many years.

Well in a way that's unimportant to the story.

It's important to me as an actor to try and figure out how did he wind up being in a place where he feels like it's time for the Jedi to end, which shocked me when I read it, but I'm not the protagonist anymore.

Those 30 years are fascinating to me but it's not the story we are telling. God knows Disney will make 50 films using younger actors at some point but this one I think is a deeper, more challenging, more cerebral, more spiritual than Force Awakens. Force Awakens really had as its objective to reestablish the Star Wars universe, All these new characters, and set the stage for what was to come. This one is like the middle act in any play or opera where there is terrible tragedy and setbacks and challenges that the characters did not expect. Sometimes it's the most fun because of that.

Your onscreen sister and offscreen friend, Carrie Fisher, died after filming her role as Leia in this film. Of course, we so wish that she was sitting right next to you.

Well, if she was sitting next to me she would be giving me the devil’s horns or the middle finger. She was one of a kind. We will never be able to replace her. She added such a fresh voice to the stories and it's hard for me to think of her in the past tense because she is still alive when you see her in the movie. you're going to love her, but the unfortunate thing is Han was more prominent in seven. I'm more prominent in eight. Her film was meant to be nine. So I don't know what they are going to do.

How many actors have played James Bond? The only thing they could do is make a character that is similar to her but not her. Because I don't think the fans would stand for another actress playing that part. She owned Leia.

In fact, she got mad at me. She read my playbill on Broadway (Hamill played the title role in Amadeus in the 1980's) and I dismissed the movies. I said, "The star of many spaced films, he made his Broadway debut…”

She goes, “What's with your not mentioning Star Wars?" I said, “Well I'm a theater actor now, " up on my high horse.

She said, “Get over yourself. You are Luke, dude. I am Leia. You're Luke. Get used to it.”

As usual, she was miles ahead of me, in terms of excepting it and owning it. I was running away from it. She said, "Bring it on". She was one-of-a-kind and boy do I miss her.