Elvis, rock and roll, and a parade of locals welcome the 59er Diner back from the ashes 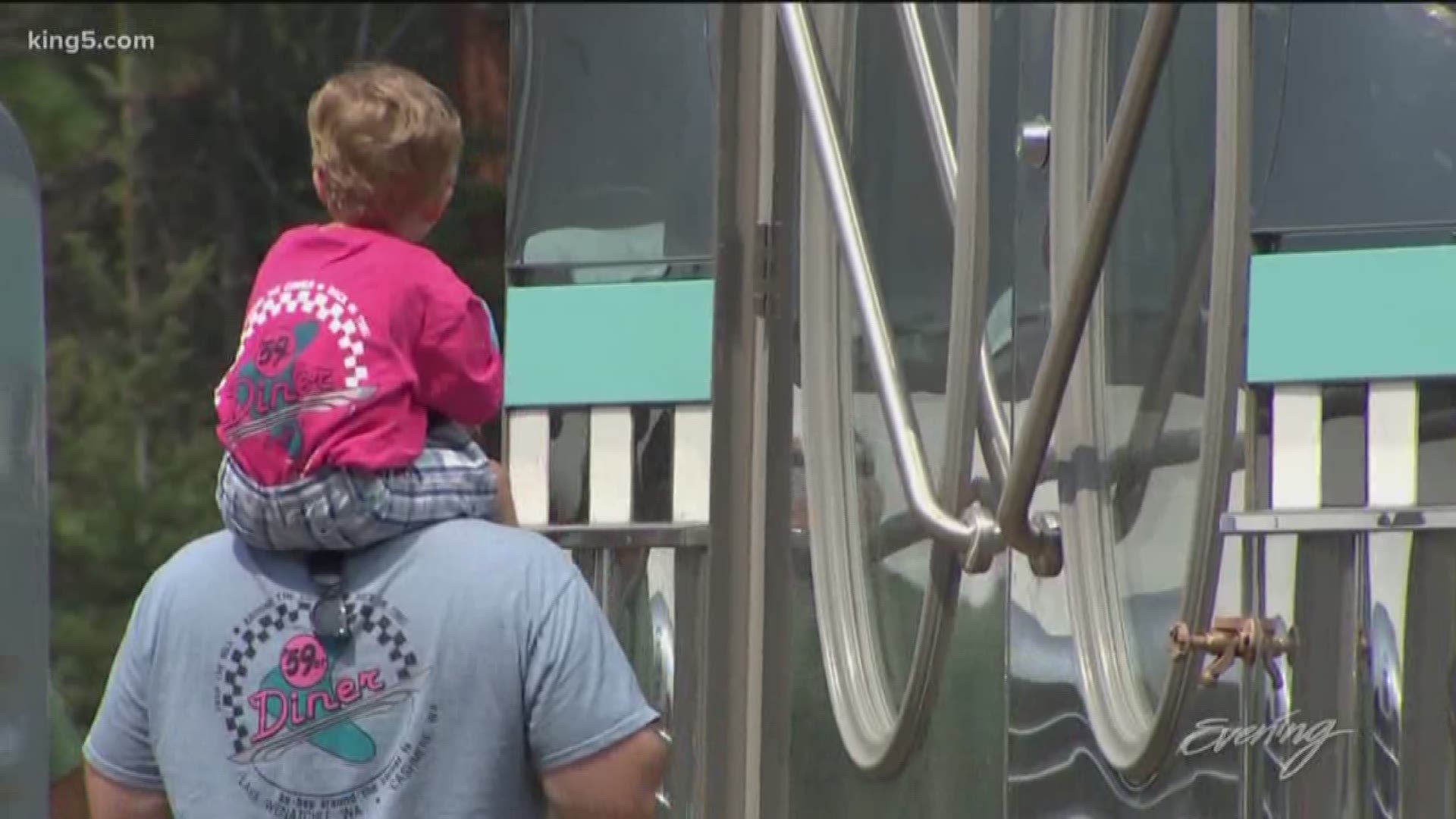 Leavenworth, Wash. — What is Elvis doing blasting rock and roll and stopping traffic along Highway 2?

He's leading a convoy of 5 semis that's bringing an iconic diner back home to Leavenworth.

The 59er Diner in Coles Corner on the east side of Steven's Pass was a decades old destination for burgers, shakes and golden oldies until it burned down in 2016. Owner Joe Cannata vowed he’d bring his diner back.

"Life hands you lemons, you make lemonade. We made lemonade shirts the week that the Diner burned down,” said Cannata, who was wearing one of those yellow T-shirts emblazoned with that phrase for his diner’s homecoming. “Because what are you gonna do? You go back to work."

Joe made lemonade – by having a new diner built in Georgia. Prefab, shiny and ready to deliver. Just like they used to do it.

“If it was 1959 and you wanted a diner this is exactly what you would do - there was actually hundreds of companies building stainless steel diners that could be transported to any location and you could open a diner anywhere you wanted,” said Cannata.

Social media tracked the diner’s week long cross-country trek. On the day of the final stretch, people in Leavenworth gather on the streets to welcome the new diner home.

"I remember when it burned down, it was horrible. But I’m glad it's gonna be opening back up. It's a great thing. It's kind of one of the main staples of the community,” said Jason Smythe, who was among the waiting onlookers on the deck at Bushel & Bee Taproom, which has a prime view of the route.

Finally, a firetruck leads the five 'oversize loads' of new diner into Leavenworth.

And Joe Cannata, in his Elvis costume, leads the celebration. He’s so excited he drove out to George to ride with the convoy along the Columbia and through Wenatchee. It’s a moment he’d been waiting years for: "Here comes the 59er Diner, shining down the road, through the entire town. Through the city of Wenatchee, through the city of Leavenworth, you know, everybody on the streets of Leavenworth, it's your whole community. And they all came out to say hi, and wish me well, and how great is that? It doesn't get better than that,” said Cannata. His voice gets a little choked up as he described his community's support.

The diner arrives home, and a giant crane also arrives to put the pieces in place. Joe’s celebration continues: he climbs into the cab of the crane truck to toot the horn a few times as the crowd buys burgers and world-famous milkshakes from the food truck that’s been operating in the interim.

In early October the new 59er Diner will open its doors. And the good old days will be back at Coles Corner near Leavenworth. Again.

“This is where you came with your dad when you were a kid, and it's been here so long now you're taking your five-year-old here. And that's what the 59er Diner is,” said Cannata with a big smile.

Accommodations for Evening Crew for this story provided by Leavenworth Chamber of Commerce. Evening celebrates the Northwest. Watch it weeknights at 7:30 on KING-TV Ch. 5 or streaming live on KING5.com. Connect with Evening via Facebook, Twitter, Instagram or Email.