The pilot project gives new hope for school infrastructure and could give districts more independence to build schools when they need them. 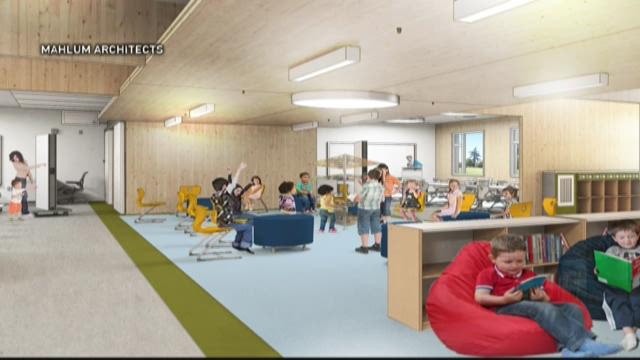 MOUNT VERNON, Wash. – There were times Carl Bruner was curious as to how it was ever going to be finished, he said Tuesday morning as a crane lifted the first high-tech wood panel up and into place – the first wall of a four-classroom modular school next to Jefferson Elementary.

The modular school is the first in Western Washington, as part of the state’s K-3 Modular Classroom pilot project. The legislature approved $5.5 million in spring 2016 to build the structures in five different school districts: Mount Vernon, Sequim, Seattle, and two more in Eastern Washington.

To do this, the state is trying out a building technology that's new to the Pacific Northwest, made up of a familiar material – wood.

Cross-laminated timber (CLT) is made up of 2x6 planks of wood – in this case Douglas fir milled in Oregon – layered and glued together.

“It’s incredibly strong,” said Joe Mayo, architect at Mahlum Architects in Seattle. “Some people think wood and fire, it's not safe, but because CLT is solid wood. They've done fire tests with CLT that it's lasted three hours or longer in a simulated fire test, so it's actually quite fire resistive.”

Builders on site said CLT walls can go up in one day versus two or three, such as in traditional framed construction projects.

Mayo says the cost of one CLT classroom is about the same price as a portable classroom.

“Students tend to respond to more permanent spaces – they tend to have better attitudes about what they're walking into,” Bruner said.

Bruner says the pilot project also gives new hope for school infrastructure and could give districts more independence to build schools when they need them. Currently, any building requires going to the public and asking people to vote for bond measures, he says.

However, as with all projects, he says the CLT school project has not been without its hiccups. Each city has its own building codes, and codes have not necessarily caught up with the new material.

Mount Vernon’s modular school interiors are expected to be completed in May.