The suspect in a Midland gas station shooting is believed to have targeted another convenience store in Tacoma on Wednesday. 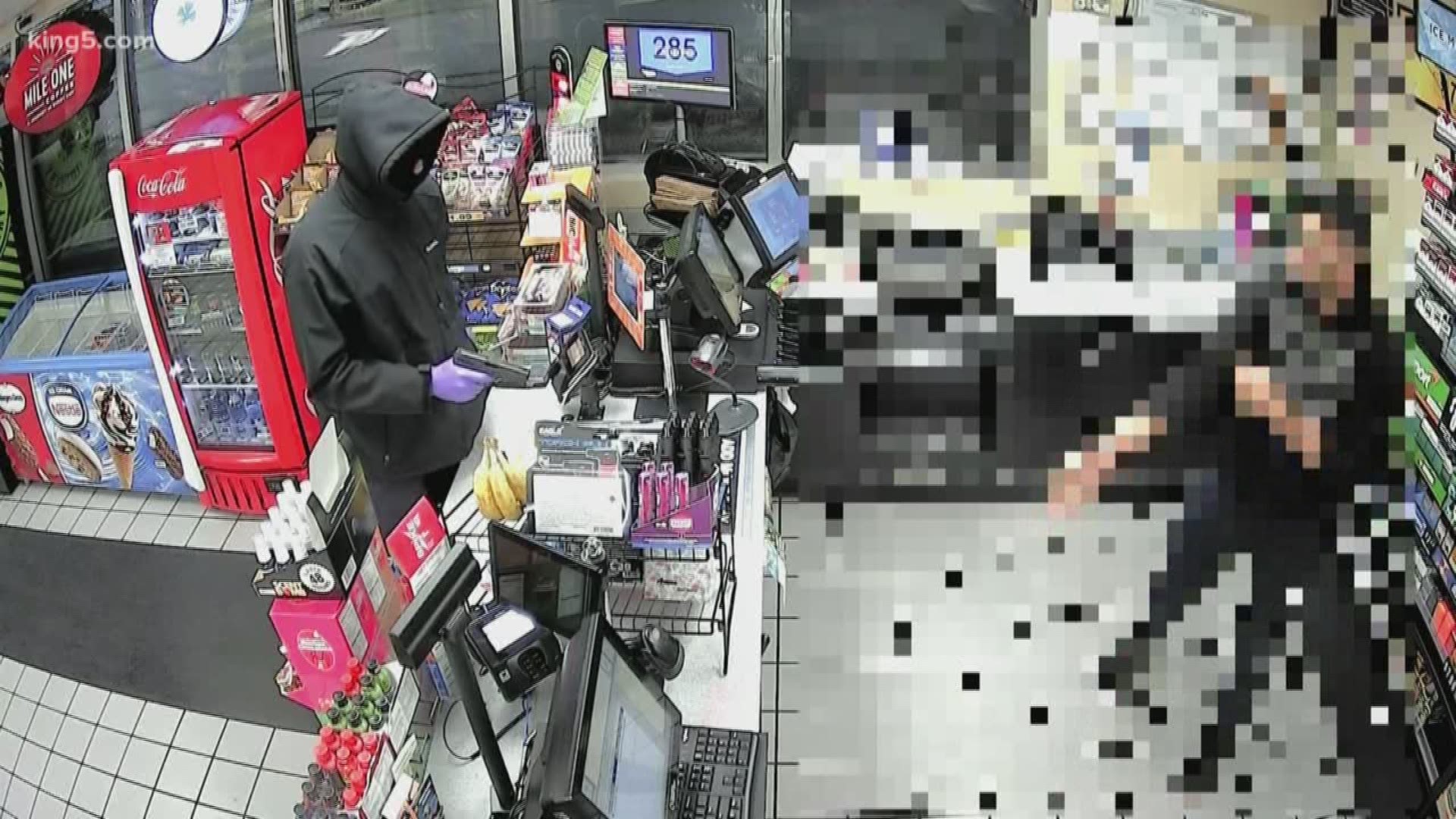 MIDLAND, Wash. — Police are offering a $1,000 reward for information about a suspect who is believed to have shot two clerks at two south Sound convenience stores within two days.

The suspect is believed to have shot a clerk during a robbery at a Chevron gas station at Portland Avenue South and 104th Street East in Midland at 5:55 a.m. Thursday.

The suspect walked into the Midland gas station armed with a handgun. The clerk put his hands up and gave the suspect money, according to Pierce County Sheriff's Department spokesperson Ed Troyer.

The suspect then took a couple of steps backward and shot the gas station clerk.

“In this particular case, the (clerk) did everything right – he put his hands up, gave him the money – but the suspect just for sport, for lack of a better term, shot him anyways," Troyer said. "Unwarranted violence. There’s no reason for this to happen.”

The Midland clerk was taken to the hospital in "pretty serious condition," according to Troyer.

The suspect is described as a male who is at least six feet tall. He was wearing a black ski mask, black hooded jacket, dark blue sweats, and purple gloves.

Credit: Courtesy of Pierce County Sheriff's Department
A suspect in a gas station robbery and shooting in Midland is described as a male who is at least six feet tall. He was wearing a black ski mask, black hooded jacket, dark blue sweats, and purple gloves.

At one point, residents were advised to stay indoors while police searched for the suspect, but that advisory has been lifted, according to Troyer.

The suspect is believed to be the same person who shot a clerk at 7-Eleven in south Tacoma on Wednesday morning, according to the sheriff's department. In that incident, the suspect went into the store, robbed it, and shot the employee around 4:20 a.m., according to Tacoma Police.

In surveillance footage images provided by the sheriff's department, the Tacoma shooting suspect appears to be wearing similar clothing as the suspect in the Midland robbery.

Karamjit Singh owns three convenience stores, including Midland Chevron, which is not far from Thursday's shooting location. His store was not robbed.

"Somebody with a gun, that's a scary situation," said Singh. "It's scary for my employees, their safety. My safety as well."

The Midland Chevron is about six miles from the south Tacoma 7-Eleven.

Troyer urged other convenience stores in the area to practice security protocols and keep two people staffed at all times.

Singh said he might add on extra staffers during the late shifts, at least until an arrest is made.

Crime Stoppers of Tacoma-Pierce County is offering a $1,000 reward for information leading to an arrest. If you have any information, please call 1-800-222-TIPS (8477), or text a tip using the "P3 Tips" app on a smartphone. You can remain anonymous.