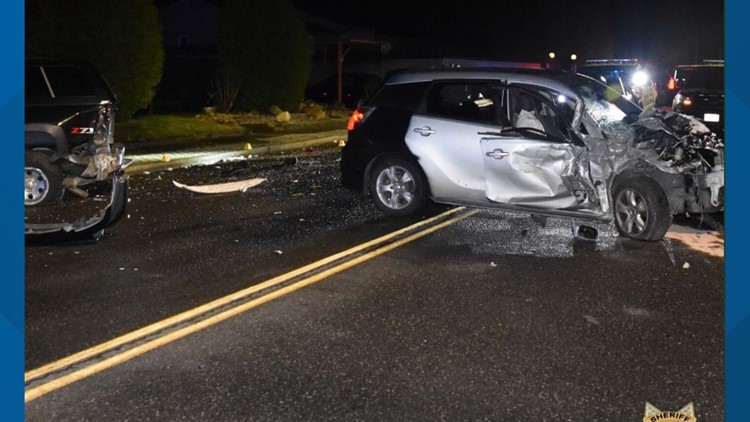 Photo by: KCSO
King County deputies are searching for the driver of a stolen car who crashed the vehicle on New Year's Eve and took off.

SEATAC, Wash. — The King County Sheriff's Office is looking for the person who crashed a stolen car on New Year's Eve and then took off.

Someone stole a Toyota Matrix on Dec. 26 while the car was left warming up in the driveway on 5th Ave. SW in the White Center area, deputies said.

Five days later on New Year's Eve, an unknown person was driving the car at a high rate of speed, going westbound in the 1000 block of 136th St. in SeaTac, deputies said.

The car drifted right and struck a legally parked Chevrolet Silverado. The right-front passenger in the stolen vehicle sustained critical injuries and was rushed to the hospital, deputies said. Their condition is not known.

The driver of the vehicle left the scene and was not found by police and a K-9 unit.

The King County Sheriff's Office said the driver is possibly a man. If anyone has any information about the case, you're urged to contact the sheriff's office at 206-296-3311 and reference case number: C19050220. You can also always leave an anonymous tip with Crimestoppers.