Assault on transgender person in Seattle investigated as hate crime 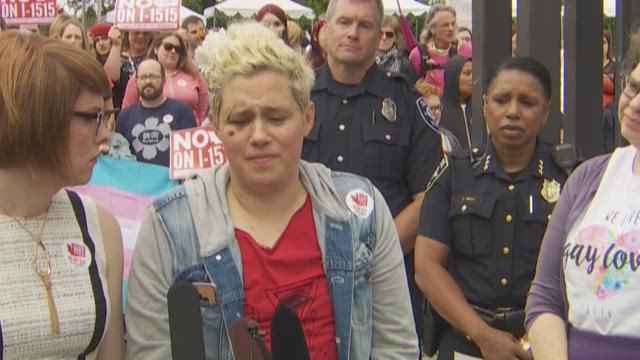 SEATTLE -- Police and the FBI are investigating an attack on a transgender person Wednesday night as a hate crime.

Seattle police say the victim was beaten while walking in the Capitol Hill neighborhood after leaving a fundraiser for the victims of the mass shooting in Orlando.

The victim, self-identified as Michael Volz, left the fundraiser at 11:30 p.m. and was walking near 11th Avenue and East Pike Street, police said.

A man allegedly approached the Volz and said, "Hey, Happy Pride." Police say the suspect then punched the victim in the face, grabbed the victim by the throat, and continued the assault while using a transgender slur.

The victim woke up and was able to drive home and call a friend, then later contacted police and went to the hospital.

"This is something that happens to our community frequently," said Volz at a press conference Friday afternoon. "We won't tolerate it anymore."

The suspect is described as white, in his 20s, with brown hair and a partial beard. He wore an orange or copper-colored sweatshirt, blue jeans and sandals.

"I'm disgusted by this hateful attack," said Seattle Police Chief Kathleen O'Toole in a statement. "I want to assure the victim and the community that the SPD will leverage every resource to identify the suspect and bring him to justice."

The attack happened on the eve of Seattle Pride events, including a Trans Pride March through Capitol Hill.

Seattle police say they will have an increased and visible presence this weekend's Pride events in downtown Seattle and Capitol Hill.