Judge hears motions, 600 jurors report ahead of trial in death of Ahmaud Arbery

Monday marked the first day of the trial of three men accused of killing Ahmaud Arbery.

Jury selection for the three men accused of murder in the death of Ahmaud Arbery continues Tuesday.

Arbery was shot and killed on Feb. 23, 2020. Cellphone video leaked to the public shows two armed white men in a truck approaching the 25-year-old Black man as he runs down the road. One of the men, later identified as Travis McMichael, and Arbery struggle over McMichael's shotgun before Arbery is shot and collapses.

Travis McMichael, his father Gregory McMichael and William "Roddy" Bryan, who recorded the video, are all charged with murder in Arbery's death.

Bookmark this page for live updates on the trial as they unfold.

Protesters visit Satilla Shores, where the small cross that once marked where #AhmaudArbery was killed has been removed @FCN2go pic.twitter.com/rpbRQnFBiA

2:28 p.m. Attorneys question Juror 72, a BLM supporter who says Arbery's death "wasn't justified" and believes his death was a hate crime. However, she said she could put aside what she's seen about the case to give the defendants a fair trial.

2:13 p.m. Juror 65 and Juror 69 dismissed for cause. Five jurors have been questioned while four have been struck for cause.

1:11 p.m. Attorneys speak to Juror 62, whose father is a friend of Gregory McMichael and is an aspiring police officer. Juror 56 dismissed for cause.

Judge Walmsley continues to grow frustrated by the pace of selection. The second panel of 20 jurors was sent home.

“I am not comfortable with this," Judge Walmsley said. "At the rate we’re going, all these plans we have to move these panels through are not going to work.”

12:15 p.m. Attorneys speak to Juror 52 who says she sees the "good and bad" in law enforcement. She also told attorneys she has followed the case and shared articles on Facebook, but has not "extensively" followed it.

12:10 p.m. Attorneys consider five more jurors, including an elderly man, another man who said he had been influenced by the media on the case, a woman whose husband knows Bryan, and a woman whose husband is "adamantly against the defendants." The fifth juror was dismissed who said all three should be convicted of all counts and had participated in demonstrations.

Judge Walmsley grows frustrated by the pace of questioning, urging the attorneys to speed up the process.

11:57 a.m.: So far, 12 potential jurors were dismissed Monday, and three thus far on Tuesday. Juror 50 was dismissed, under agreement from both sides of the case, with no cause given.

11:55 a.m.: Juror 48 is dismissed. She is a young woman who is hearing impaired with no reliable transportation to and from court. "I saw the news footage and I saw the video footage of the crime, and I’ve already formed a guilty opinion of the crime," Juror 48 says. "I think that they’re guilty."

11:50 a.m.: One potential juror out of the pool of 20 people questioned is dismissed. He is a Black man who says he has participated in racial justice demonstrations.

One of the potential jurors out of the pool of 20 ppl questioned today has been dismissed. He’s a black male who says he has participated in racial justice demonstrations. @FCN2go #AhmaudArbery

11:25 a.m.: Outside the courtroom, demonstrators are gathered to support Arbery. A small child takes the mic, saying "Who are we here for?" as the crowd chants back "Ahmaud Arbery!"

Youngest protester takes the mic (You might remember him from yesterday when he was riding his mini motorcycle) #AhmaudArbery ⁦@FCN2go⁩ pic.twitter.com/YLE8Yobmdg

8 a.m.: Day two of questioning potential jurors is scheduled to begin. Eight candidates remain from the 20 who were questioned Monday. A new round of 20 will be questioned beginning at 8 a.m. Tuesday. 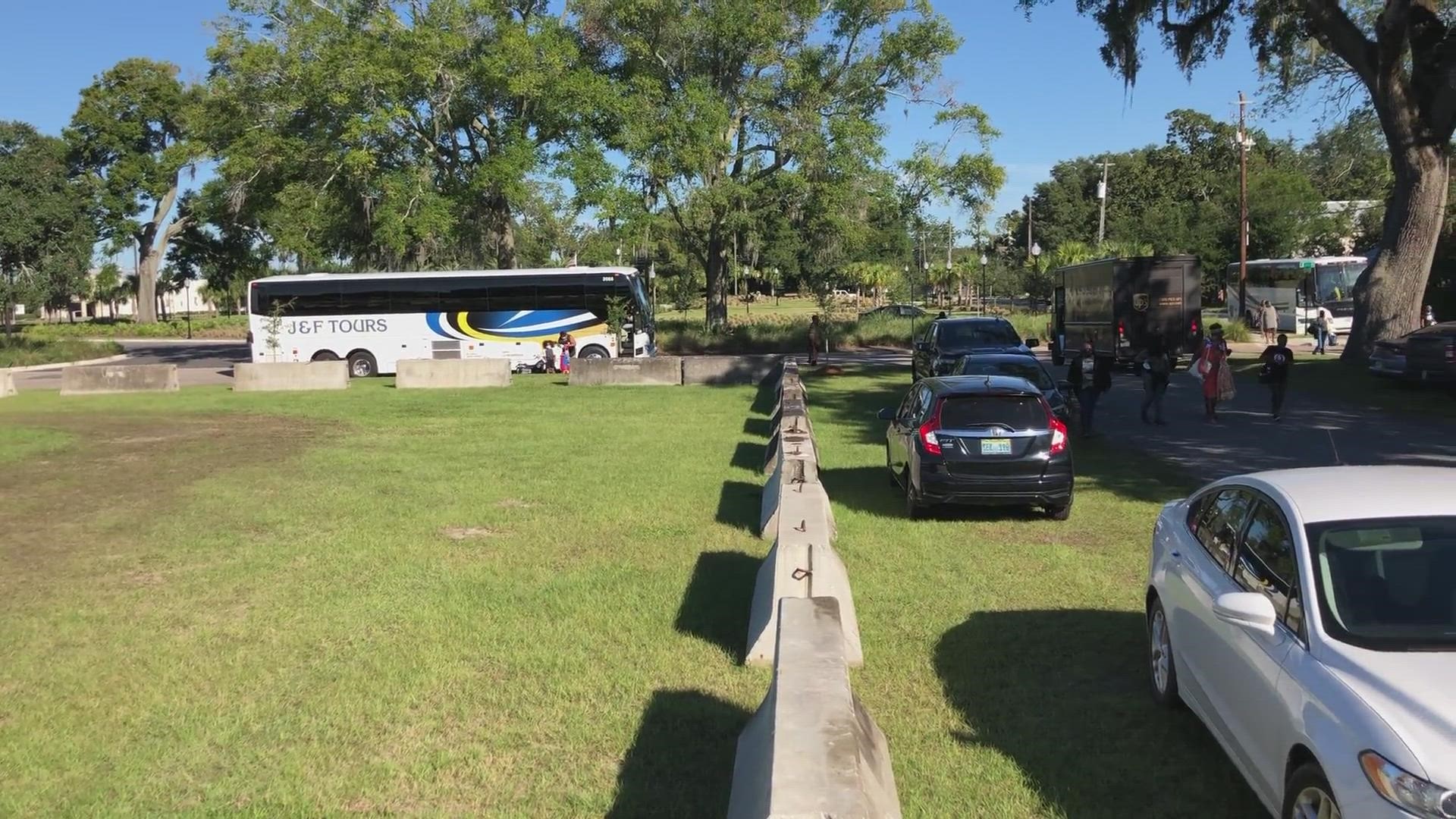 8:15 p.m. Ben Crump, Marcus Arbery and others have gathered to hold a panel discussion on the first day of the trial as well as justice in America.

7:06 p.m. Court adjourns for the day with 12 jurors in all dismissed, including those who were questioned. Judge set to begin new panel of 20 potential jurors Tuesday morning. It is unclear when the eight of the first panel not addressed Monday will be questioned.

5:56 p.m. Fourth potential juror interviewed says she believes racism was a factor in Arbery's death and criticized William Bryan for filming the incident.

“His videotaping the scene was disgusting and vicious,” the jury panelist said. “However at the same time I’m thankful that he did because we are able to see what happened. But still very sad.”

4:37 p.m. Another potential juror questioned says she had a negative feeling about all three defendants. She also feared being a juror because of possible repercussions and questioned citizens' arrest.

“It’s hard for me to believe that there is a law that says that a citizen can shoot down another one because he thinks something happened. I just don’t understand citizen’s arrest.”

4:00 p.m. Second potential juror questioned says he was "sick" of the case. The potential juror told attorneys while he thought "they were guilty," he felt he does not have fixed opinions.

3:46 p.m. Second juror was dismissed without questioning for undisclosed reasons.

3:29 p.m. First potential juror brought in for questioning. Juror says he had negative feelings about one of the defendants: Gregory McMichael.

3:15 p.m. First potential juror dismissed due to being a certified law enforcement officer.

2:54 p.m.: The judge tells potential jurors not to discuss anything related to the case outside of the courthouse. The court is in recess. It is not clear when court will reconvene.

2:34 p.m. Prosecutor Dunikoski asks panel of jurors who would like to serve on the jury; only one raised his hand.

2:12 p.m.: First Coast News spoke with Benjamin Crump, one of the attorneys for Arbery's family. 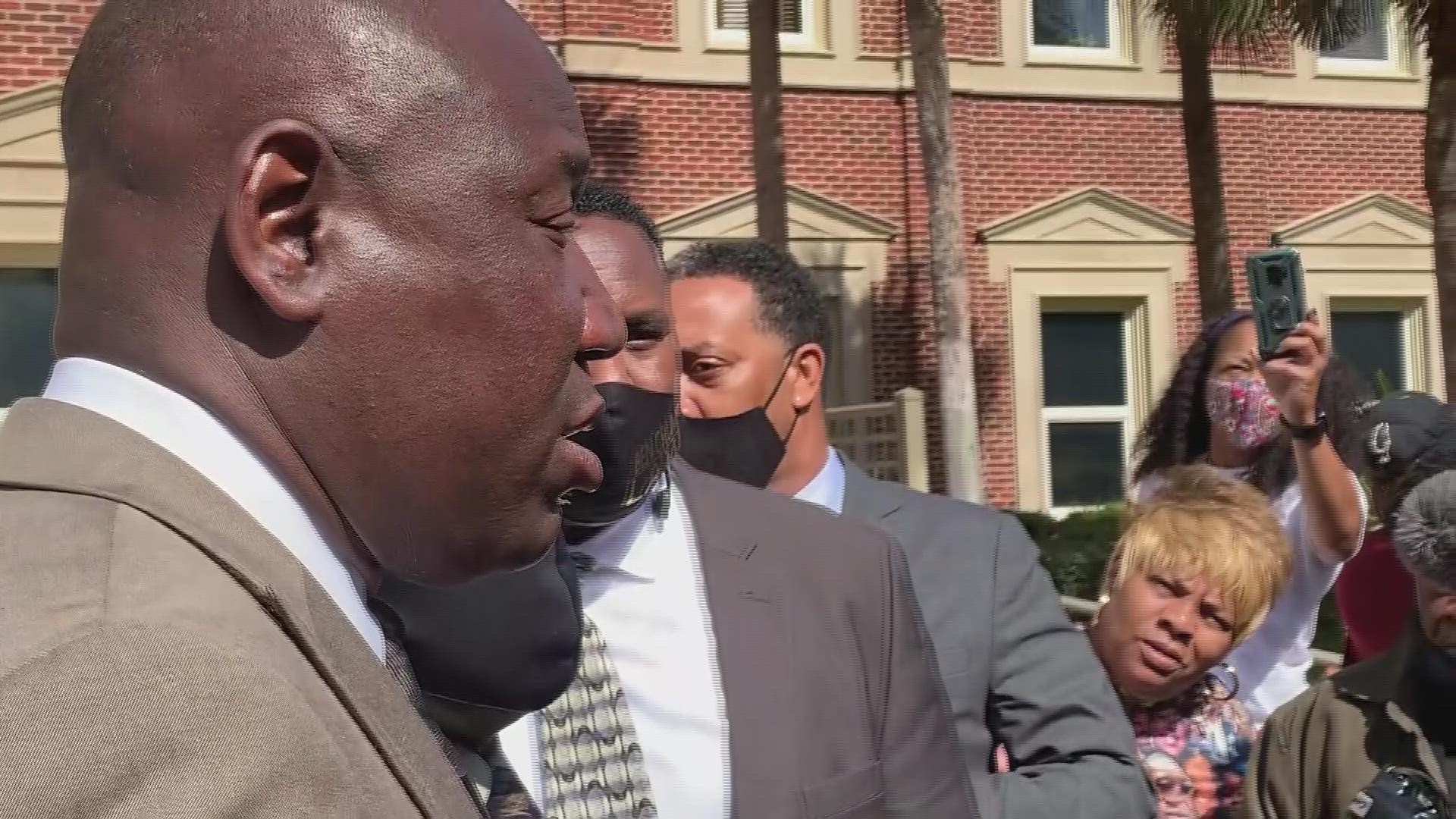 1:32 p.m.: Court resumes. The judge explains to the first group of 20 potential jurors how the process will unfold. The group was narrowed down from the first 200 people who reported to Selden Park earlier Monday morning. There were 600 people summoned today for vetting, with 1,000 people summoned overall.

11:27 a.m.: Several children, from as far away as Atlanta and Missouri, are in Brunswick for the trial.

Several kids —from as far away as Atlanta and Missouri— are here for the trial #ahmaudarbery ⁦@FCN2go⁩ pic.twitter.com/XTfRIqe5Xx

10:21 a.m.: Protestors outside the courthouse are singing "Whose side are you on?" and chanting "Say his name, Ahmaud Arbery."

10:17 a.m.: Two buses full of people who came from all over the country arrived to show support for the Arbery family.

2 buses full of people who came from all over the country just got here to show support for the Arbery family @FCN2go pic.twitter.com/lqWK7D78sR

9:44 a.m.: A group of clergy members gathered outside of the courthouse before jury selection got underway. They prayed and sang, with members of 50 churches uniting to set the tone for a peaceful trial. The group says they will be there throughout the duration of the trial and available to pray with the community.

Jury duty notices were sent to roughly one out of every 85 residents in Glynn County, where Arbery and the accused killers lived within 2 miles of each other. That's a total of 1,000 potential jurors, with selection expected to last two weeks.

Six hundred potential jurors were summoned to arrive Monday, and 400 are on standby.

The pool was questioned by attorneys at Selden Park Gymnasium Monday morning.

First Coast News Legal Analyst Latoya Williams Shelton said seating an impartial jury could be a complicated process because of the highly publicized nature of the case.

“We're going to have people that are exempt because of their bias and because they've already formed opinions,” Shelton said.

The potential jurors were all sent a three page questionnaire asking if they have followed the case and what they already know about it. They’ll be questioned in both groups and individually by lawyers at the courthouse. The judge will seat 12 people and 4 alternates.

RELATED: Timeline in shooting death of Ahmaud Arbery, what you should know about trial of accused killers