As the Camp Fire charged toward Paradise last Thursday, Paul and Suzie Ernest tried to escape their home on Edgewood Lane but encountered a very difficult situation. 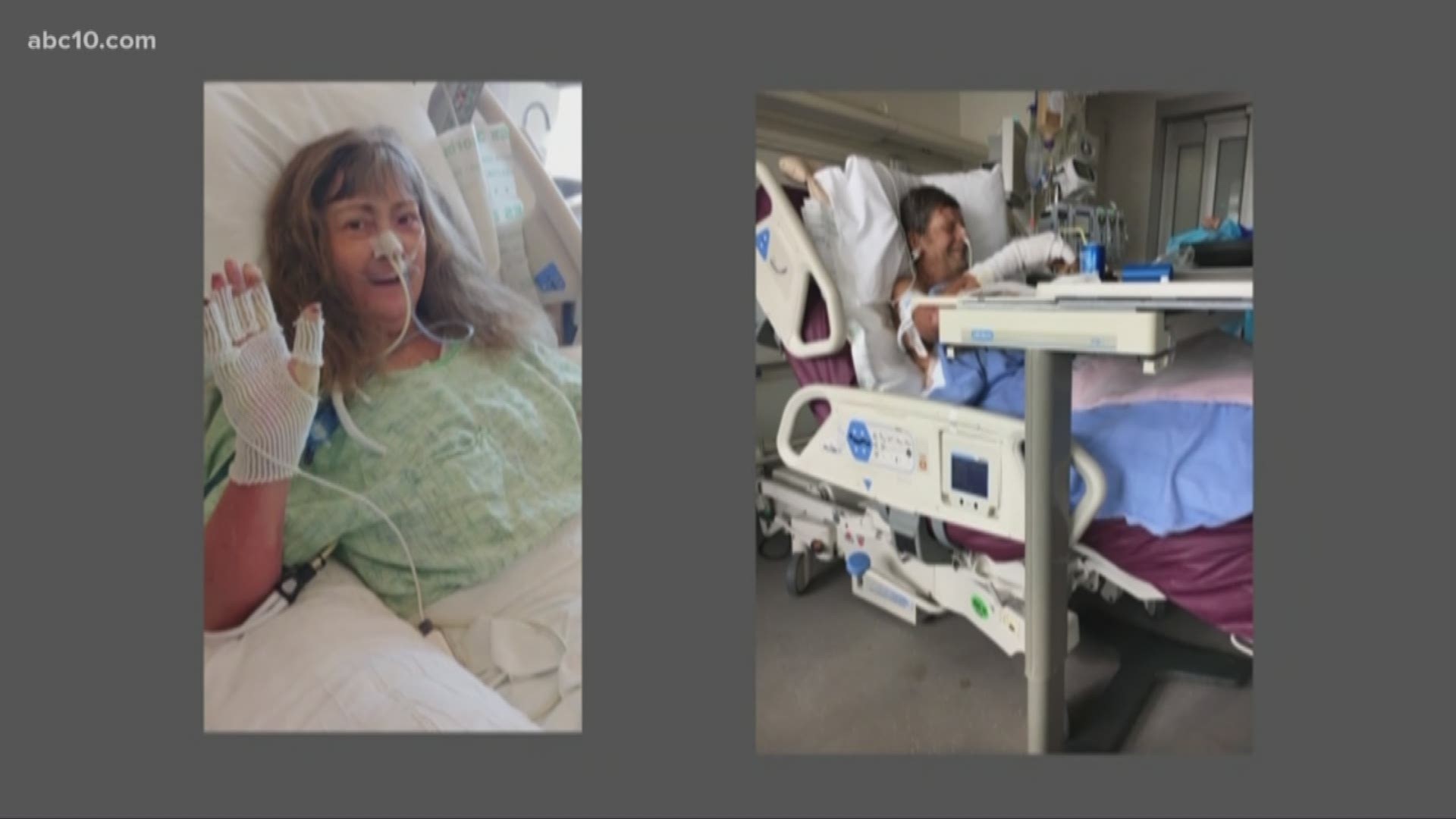 If you're viewing on the ABC10 App, tap here for multimedia.

PARADISE, Calif. — A Paradise couple is recovering from third-degree burns in the UC Davis intensive care unit after a near-death escape from the Camp Fire.

As the fire charged toward Paradise last Thursday, Paul and Suzie Ernest tried to escape their home on Edgewood Lane but had to turn around. Along with their neighbor, Travis Wright, they then jumped on their four-wheeler quads and drove to a nearby field where they took shelter behind a boulder.

As waves of fire passed over the couple, Wright describes hearing screams from the couple.

Paul and Suzie Ernest are 2 of the 10 #CampFire burn victims currently being treated at @ucdavis. The couple miraculously survived by hovering behind a large boulder in a field off Edgewood Lane - as waves of fire came over them. #ParadiseStrong pic.twitter.com/2Dwdbs1mxt

"I could hear Paul and Suzie screaming and I knew it was getting them pretty bad," Wright said. “It was a terrible, terrible sound."

Paul Ernest tried to protect his wife by covering her with his body. Even so, they both got third-degree burns.

“They were on fire,” their son Jessee Ernest said. "My mom’s shoes burned off. My dad’s leather shoes burned. Cooked. Their pants were burned off from knees down."

Eventually, Wright was able to get on one of the quads and flag down first responders who were there to help. They were able to go rescue the Ernests and bring them to a helipad where they were airlifted to the burn center at UC Davis.

"Those guys are heroes," Wright said of the first responders. "They hopped on my quad. Went right into the flames."

He added, "But I knew I had to get Paul and Suzie out of there, because there was no way they could walk."

The couple remains in fair condition at the ICU at UC Davis. They expect to remain in the hospital for roughly two months.

The only belonging the couple has left: This igloo ice chest (which they brought with them when they evacuated) & the 2 last tomatoes from their garden they put inside. (Their son says they plan to use the seeds from these to plant tomatoes in their new home) #CampFire pic.twitter.com/1KRwdetJPy

Part of their recovery will also be rebuilding.The couple lost their home in the fire. The only belongings they have left: An igloo ice chest they brought with them when they evacuated, and the two last tomatoes from their garden they pit inside. (According to their son, they plan to use the seeds from the tomatoes to plant tomatoes in a garden in their new home.)

Click here for the GoFundMe which has been set up for the family.

RELATED: California Wildfires: The New Normal is ABC10's new nine-part series on how wildfires are changing lives across Northern California.

Watch now... Meet the Hotshots. The Navy has SEAL Team Six. The Army, Delta Force. But in the world of firefighting, hotshots are the tip of the spear.