Mayor Jenny Durkan has opposed federal government intervention in local protests, but police union president Mike Solan called for "any help we can get." 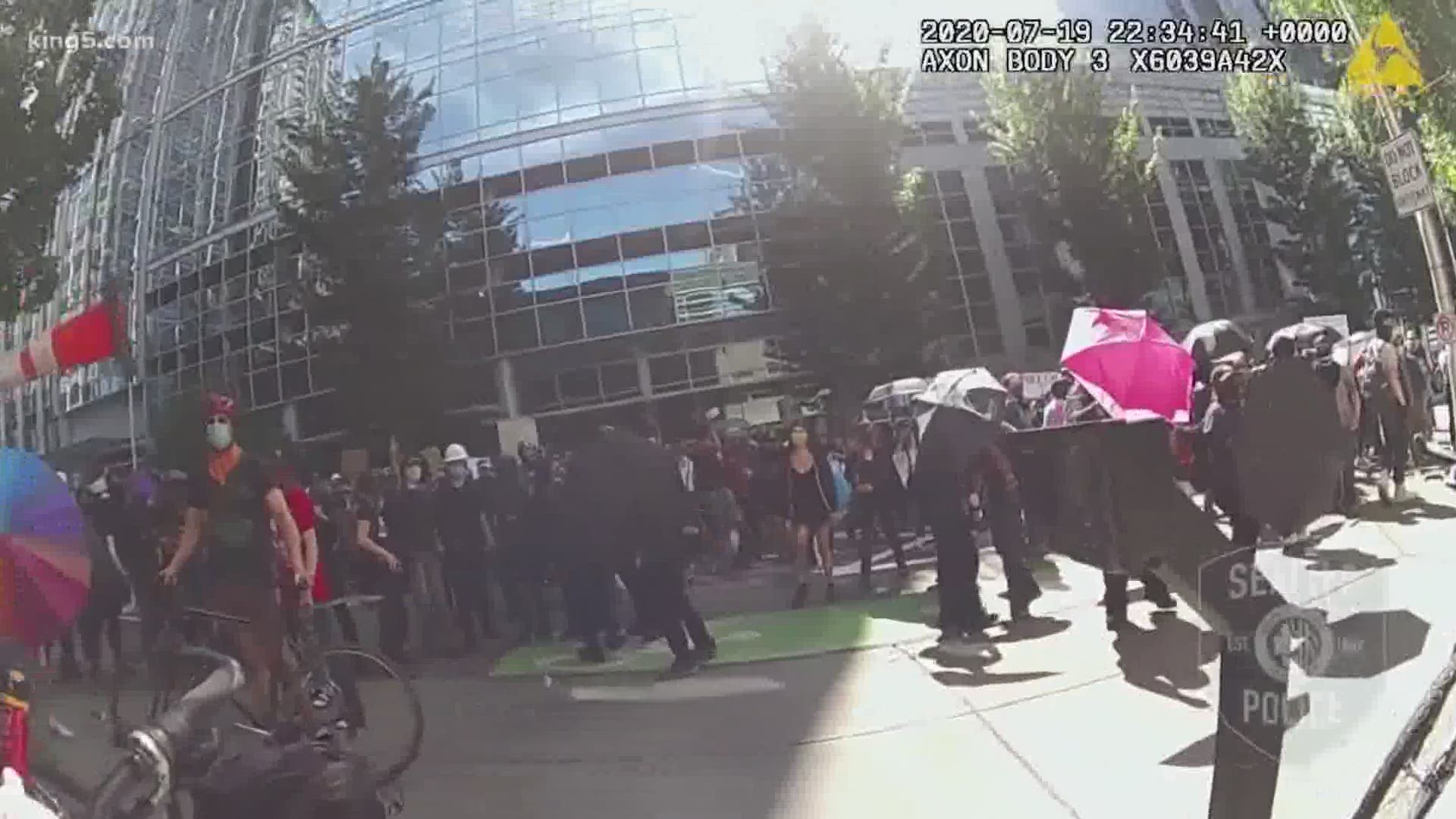 During the protest, a dozen police officers were hurt and property damage was reported.

The police department released video that shows how quickly the situation escalated Sunday when protesters marched to the West Precinct, which is the station located in Belltown.

Officers say the situation started when a man used an umbrella to intentionally block the view of a security camera outside the station. When police showed up, the man with an umbrella backed away, but a group gathered in front of officers.

Police attempted to use their bikes to keep the crowd back. Then, the footage shows water bottles and a traffic cone being hurled toward officers. Police say officers used pepper spray on the crowd. Then, the video shows what police are calling multiple large mortar-type fireworks thrown at officers.

“We are talking about explosive devices,” said Mike Solan, President of the Seattle Police Officers Guild. “We cannot continue to get our officers hurt by the dozens.”

Solan said Sunday is an example of how dangerous demonstrations have become.

Solan's statement conflicts with the calls from Mayor Jenny Durkan and others for the federal government to remove their agents from local protests in Portland, and to refrain from sending forces to other cities.

President Donald Trump has sent in federal troops to Portland to handle protesters. The federal agents have been in plain clothes and have thrown protesters into unmarked cars.

Trump has not ruled out doing the same in other cities.

Durkan stated on social media that she’s joined with other several mayors in sending a letter to the Department of Justice and Department of Homeland Security, asking them to "immediately halt their unacceptable practice of sending federal forces into major cities."

KING 5 asked Solan about those concerns.

“I'll stick with what I asked earlier," Solan said. "We will take any help we can get to protect Seattle police officers and our community at large."

KING 5 also asked the Seattle Police Department whether it had a stance on calling for federal troops.

“That would be a decision that's vetted through the mayor's office, and is a much lengthier discussion,” said Seattle Police Department spokesperson Sgt. Lauren Truscott.

SPD said they released the video from Sunday’s protest for transparency and will continue to release video of significant incidents.

One officer was hospitalized. He has since been released.

Two people were arrested in connection with the protest, one for assault and the other for stealing an officer’s bike.