Grassroots groups are building a movement to solve the cases of missing and murdered indigenous people in Washington. 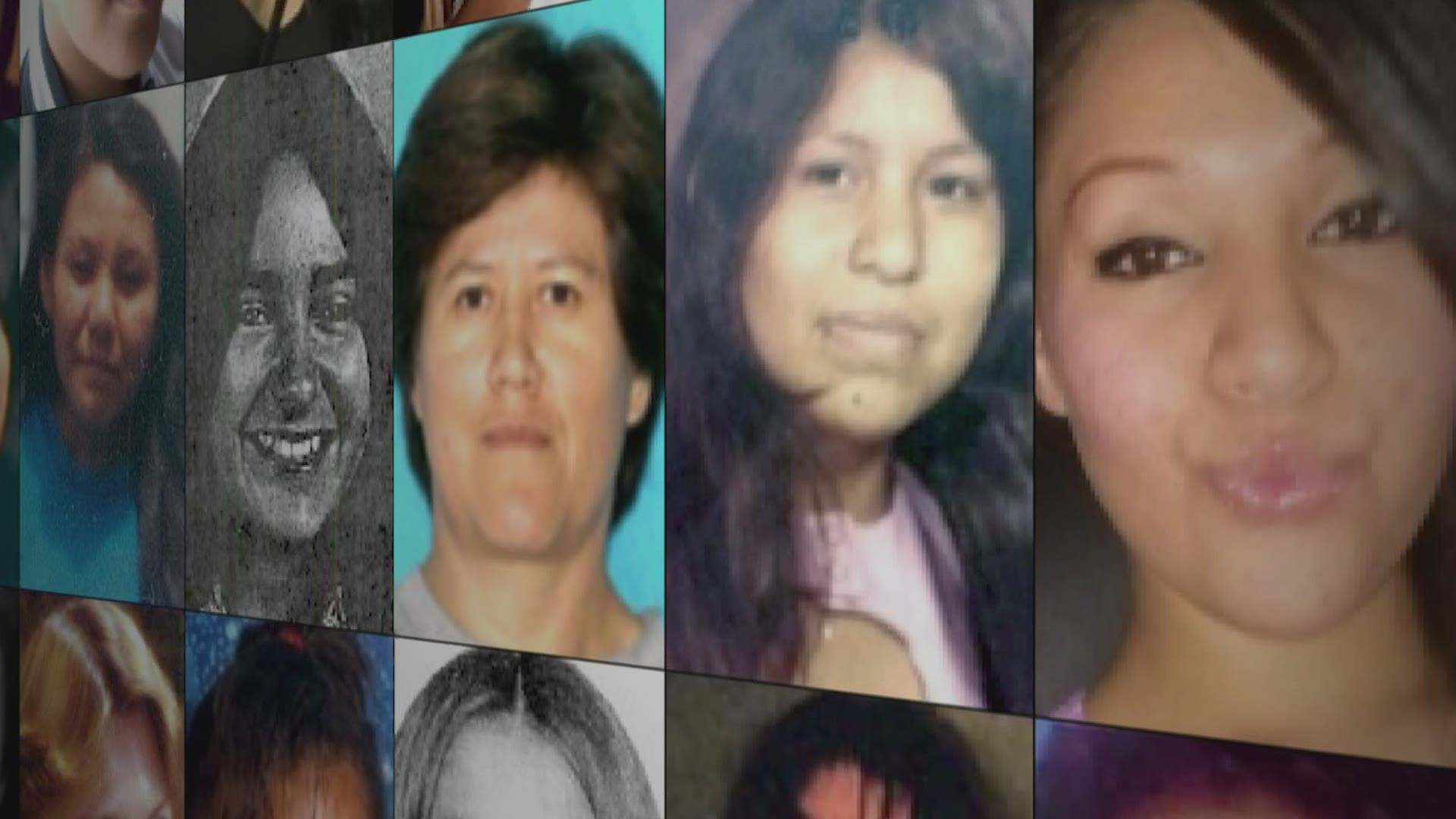 YAKIMA COUNTY, Wash. — Across the country, there are thousands of reports of Native Americans missing. But for a long time, what has been a crisis on Indian reservations has been widely ignored.

Thanks to grassroots efforts drawing more attention to these cases, there are members of law enforcement and some lawmakers paying attention and working to turn awareness about missing and murdered indigenous women, men, girls and boys into action.

Patsy Whitefoot, a citizen of Yakama Nation, is among the leaders advocating on behalf of the missing. Whitefoot is still waiting for any word about what happened to her sister, Daisy Mae Heath.

“She left one day, and so I just thought well she might be in the mountains, because it was toward the end of summer, because it was still time for picking. Or she could have gone hunting,” Whitefoot explained.

Heath, Whitefoot’s youngest sister, never came home. The 29-year-old was reported missing in the fall of 1987. More than 30 years later, what happened to Heath is still a mystery.

“There is just no evidence of where she may be,” said Whitefoot.

Whitefoot says her sister’s story is just one of the many examples of a crisis involving indigenous people, missing or murdered, with poor data collection only contributing to the mounting number of cold cases.

“It is still like this black hole that exists out there,” said Whitefoot. “You begin to question, well, why am I still here when everybody else is gone around you?”

It is painful for Whitefoot who has lost not only family but friends too. She finds herself in a club no one wants to join: the loved ones left grieving.

"We come together, and we know what each other is going through, and I think about that, that we shouldn’t have to be together, but we are,” said Whitefoot.

Whitefoot and others see racism as a reason why, historically, this crisis has largely been ignored and the data not properly collected. According to the numbers the Washington State Patrol does have, Native Americans are disproportionately represented, making up about 2% of the state’s population but accounting for nearly 6% of active missing persons reports.

State Rep. Gina Mosbrucker says she is working to change that with legislation. Mosbrucker introduced House Bill 1713 which passed in 2019. It established two tribal liaison positions within the Washington State Patrol to "build relationships between governmental organizations and native communities." House Bill 2951 also passed in 2018, bringing stakeholders together to study and identify the issue of missing Native American women and report recommendations to the Legislature.

"Two bills later – we're on our third now – fixing the issue as much as possible, and trying to bring as much awareness as possible,” said Mosbrucker, R-Goldendale.

For more than five years, Mosbrucker says she's been working on the issue with Colville Confederated Tribe member Earth-Feather Sovereign and many others.

Rep. Mosbrucker says gathering an accurate count of how many are missing is critical, but she notes that the state’s current data is an underreport with some cases where the race of the missing person has been misidentified.

“We don't have a number and we're, across the nation, working really hard. Even federal government's working hard to help to make sure we get that fixed,” said Mosbrucker.

George Lee Jr., a member of Yakama Nation, is working to pick up the pieces after losing not one but two loved ones.

"I went through something, and I'm not going to be the last to go through it, unfortunately,” said Lee.

In 2003, his mother, Sandra Lee Smiscon, was found shot and killed in Seattle. It is a case that remains unsolved.

Sixteen years later, there was another tragedy. Lee's missing cousin, Alillia Minthorn, 25, was found shot and killed in a remote area of the Yakama Reservation. In June, Jordan Everett Stevens was found guilty in the shooting death of Minthorn.

"It was a really big shock, and it hurt,” said Lee.

Today, Lee raises awareness, speaking out about the missing, a list that is long.

"We have so many resources that are available that can help aid and bring together a very swift and powerful search party. But we won't take those steps, and that's the most painful part,” said Lee.

In recent years, there has been national recognition with the passage of bills, like Savanna's Act, which directs the Department of Justice to review and revise law enforcement protocols to address these cases and report statistics about missing or murdered Native Americans.

There have been changes at the state level too.

Patti Gosch is one of two Washington State Patrol Tribal Liaisons, hired in 2019, to focus on missing indigenous persons cases. Gosch works in the western part of the state while Dawn Pullin works as a tribal liaison in eastern Washington.

"We still have a past that we need to catch up with,” said Gosch. “Janis Hannigan is our first one from 1971.”

Gosch says her priorities include posting an updated list of the missing twice a month, changing inaccurate racial identifiers and working closely between Native communities and government organizations to help bring the missing home.

"We need to remember these are people. These are communities that are hurting. These are families that need to have some sort of closure,” said Gosch.

For Whitefoot, the sad statistics are much more than that, because behind the numbers are the faces, at times of friends and always of a sister, Daisy Mae, someone she will never stop fighting for. The frustration fuels her so much that she’s become a leader in a movement, using her voice on the War Cry podcast and at podiums to make sure these cases are seen and investigated.

The high rate of missing indigenous persons cases in Washington state and across the nation is receiving more attention today compared to years past. Families impacted by these cases are looking to turn that awareness into action.

Nona Blouin and Gerry Davis say their family has been in pain over this crisis for nearly eight months. A reminder of their hurt now towers over Interstate 5. That is where a billboard bears the message that Mary Davis Johnson is missing.

Blouin and Davis are constantly thinking about their sister, Davis Johnson, 39, known for being an adoring aunt and loyal friend.

But for their family, everything changed in a flash on Fire Trail Road. Tulalip Tribal Police Chief Chris Sutter says it was on Fire Trail Road on the day before Thanksgiving that there were sightings of Davis Johnson.

"We have at least three people who saw her on the road that day walking. And our phone record searches indicate that at least her phone made it to the area of 116th Street here in Tulalip,” said Sutter. “We believe that she may have been transported to the area of Oso, Washington, but she never made it to her final destination."

Sutter says Davis Johnson may have been attempting to visit people she knows in the Oso area.

"She has a family there that she goes to and stays with and gets sober and clean. I believe that's where she was going and that's what she was doing,” said Blouin.

Blouin and Davis said they had no idea their sister was missing until Davis Johnson’s estranged husband contacted police on December 9, 2020.

"He said that she has been gone for a couple of weeks and that she is not normally gone that long,” said Davis.

Davis Johnson, a Tulalip Tribal Member, is one of three people currently listed as missing in Sutter’s department alone. He says it is evidence of an epidemic.

"You talk to anybody who lives on a reservation, and they know somebody who's gone missing,” said Sutter. "Unfortunately, too many of them are abused, exploited and murdered.”

These tragedies are not talked about enough, according to Abigail Echo-Hawk, the executive vice president of the Seattle Indian Health Board. Echo-Hawk sees colonialism, racism and sexism as factors fueling the high rates of violence.

“The reality of violence against Native women is because this country has created an environment where raping us, where abusing us, where trafficking us and where killing us is done with absolutely no to very little consequences,” said Echo-Hawk. “With the data we found, what we saw, was appalling.”

Echo-Hawk says it was a crisis no one was keeping track of properly. Her team at Urban Indian Health Institute, a division of Seattle Indian Health Board, went to work, publishing a report about missing and murdered indigenous women and girls in the Northwest and across the country.

The report highlighted that in 2016, the National Crime Information Center had more than 5,700 reports of American Indian and Alaska Native women and girls missing.

The report also noted that 71% of American Indians and Alaska Natives live off federally-defined tribal lands in urban areas.

"The urban Indian population is so invisible, and if people were collecting data, they often were racially misclassifying folks,” said Echo-Hawk.

Gosch and others at WSP are working to correct inaccurate racial identifiers and bring the missing home.

“We've heard of women and men both that went to a bar and had a few drinks with some people that they met and they wake up in the back of a moving vehicle and they're informed they're about to go to work. And that's when the trafficking begins,” said Gosch.

Sutter says cases like that require extensive resources – resources that not all tribal police departments are able to access.

"They take our detective resources off-reservation. Often, I think nationally, a very high percentage of cases are people, are non-native Americans, that prey and exploit Native American women. So, these cases do have that jurisdictional patchwork,” said Sutter.

Echo-Hawk says work is underway to clear up confusion around jurisdiction and to find the root causes behind these cases. That’s the focus of a new state task force.

"We're bringing together groups of people to discuss and to make recommendations to the Washington state Legislature that are community-driven and focused on gathering information on how we can truly intervene and prevent and also work to solve cases of missing and murdered indigenous women and girls and all people,” said Echo-Hawk.

“You never think it is going to happen to you, and one day it does, and you feel for the families out there going through this,” said Blouin. "I would personally love to get to re-know my sister again. I miss her."

Anyone with information on the whereabouts of Mary Davis Johnson, contact Detective David Sallee at 360-716-5962 or email dsallee@tulaliptribalpolice.org