Tulsa is marking 100 years past a two-day attack on an all-black neighborhood by a white mob. The Tulsa Race Massacre left as many as 300 dead. 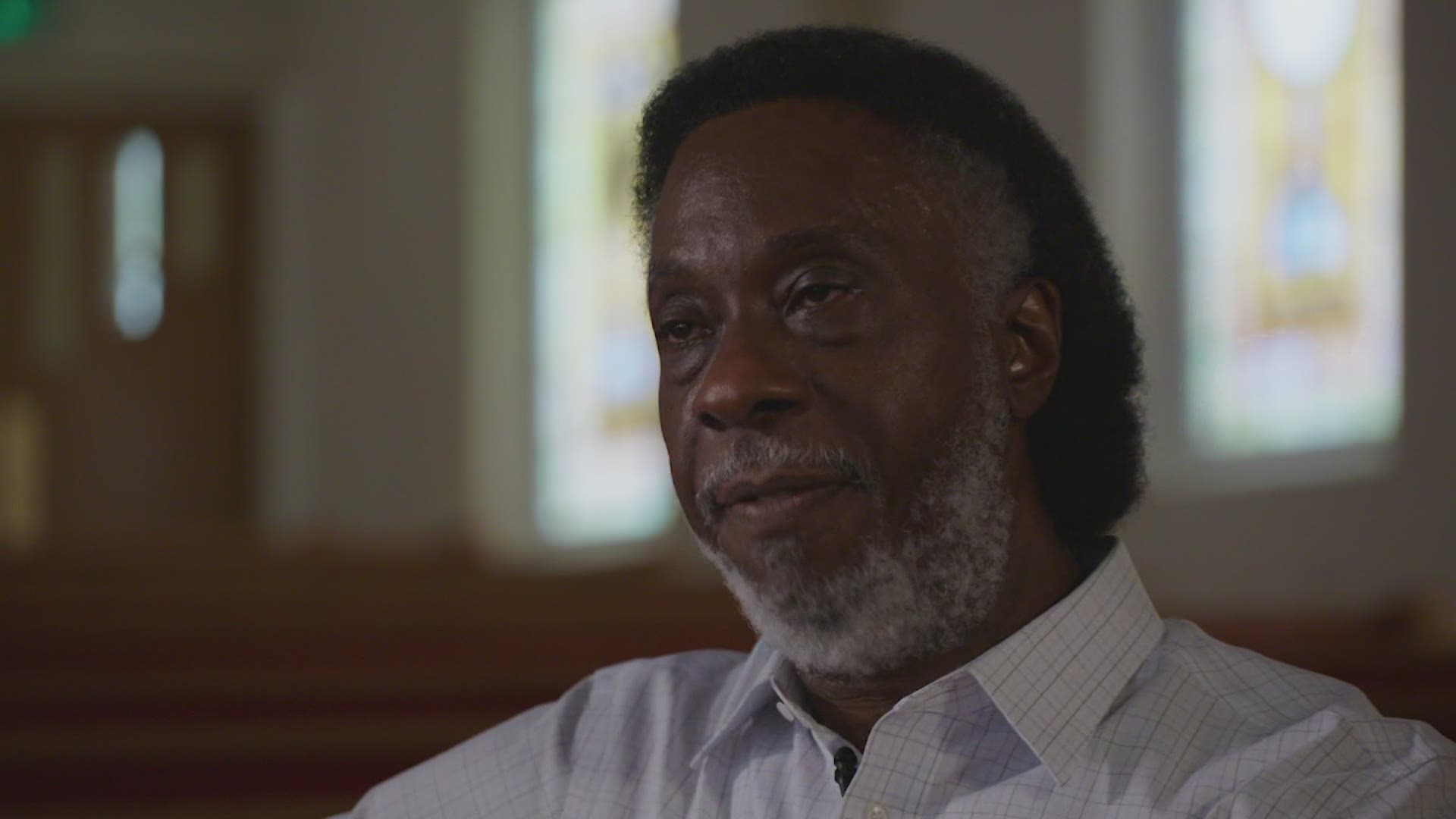 SEATTLE — Tulsa is marking the 100th remembrance of a two-day attack on an all-Black neighborhood by a white mob. The 1921 massacre left as many as 300 people dead.

To this day, survivors are demanding reparations for the Tulsa Race Massacre, one of the worst race massacres in American history.

One hundred years later and more than 1,500 miles away in Seattle, Rev. Dr. Carey G. Anderson feels a deep connection to the traumatic event.

"Vernon A.M.E. is an important part of that whole situation,” Anderson said.

Anderson is the senior minister of First A.M.E. Church in Seattle, which is part of a church family that includes Historic Vernon A.M.E. church in Tulsa, Oklahoma.

"We still have fire damage from the race massacre of 1921. This pillar, actually the buckling on it, is part of that fire damage,” said Rev. Dr. Robert R. A. Turner, pastor of Historic Vernon A.M.E. Church.

Turner says the church is the only Black-owned building that survived the massacre that occurred in the Greenwood District.

The prosperous community was known as Black Wall Street.

Attorney Hannibal B. Johnson is the author of several books about the Tulsa Race Massacre and the racial trauma that followed.

"I say that Tulsa was a tinderbox or a powder keg needing only something to ignite the flames, and that was an incident that involved two teenagers, a 19-year-old Black boy who shined shoes downtown [and] a 17-year-old white girl who operated an elevator downtown,” Johnson said.

Dick Rowland, 19, boarded the elevator being operated by Sarah Page, 17.

"Something happened on the elevator. We don't know exactly what, but it caused him to bump into her, brush up against her, step on the foot of Sarah Page,” Johnson said.

"That might have been the end of the story if it had not been for the intervention of the 'Tulsa Tribune,' which was a daily afternoon newspaper, very popular at the time. The 'Tribune' the very next day published a story entitled 'Nab Negro for Attacking Girl in an Elevator.' It was a false narrative,” Johnson said.

“A large white mob numbering, ultimately, in the thousands gathered on the lawn of the courthouse," Johnson said. "The jail set atop the courthouse, that's where Dick Rowland was being held. There were rumors that he was going to be lynched by the mob. Black men became concerned. Ultimately, several dozen Black men marched downtown to protect Dick Rowland. Some of those men were armed. A white man tried to take a Black man's gun, and the gun discharged. And in the words of a number of survivors of the massacre, all hell broke loose after that.”

"Even our fire department didn't put out one fire. They weren't on vacation. They were on the clock,” Turner continued. “They drove the fire trucks to the places where the fire was, and they were told not to put out the fire."

Eventually, the National Guard was sent in and when the dust settled, the damage was devastating.

It was enough to crush a community, but that's not what happened.

"What's remarkable here is the people. After the community was destroyed in 1921, even as the embers still smolder, the rebuilding began,” Johnson said.

The basement of Historic Vernon A.M.E. church, which survived the massacre, was put to use the following Sunday.

"They moved the ash out of the way, they found chairs, and to not be denied, they had church service,” Rev. Turner said.

Rev. Turner says for too long, the history was kept buried, and the number of deaths covered up. But now the city is working to find unmarked graves, and survivors continue to share their stories, demanding reparations for the massacre that destroyed the Greenwood district.

"If we leave things unaddressed, it's like a wound that you leave untended. It just festers,” Johnson said. “We have to acknowledge what is and imagine what could be.”

“This story is so important because you can remap Tulsa, and put it right over the face of Seattle, Washington, and see some of the same racism, some of the same segregationist thinking,” Rev. Anderson said. "We have to look at our past so that we can determine our future."

Rev. Anderson says facing the past is necessary to make sure the kind of racial violence that happened in Tulsa, doesn't happen again.