For some, Tacoma's Chinese expulsion of 1885 continues to be a source of pain, especially in light of recent reports of hate crimes against Asian Americans. 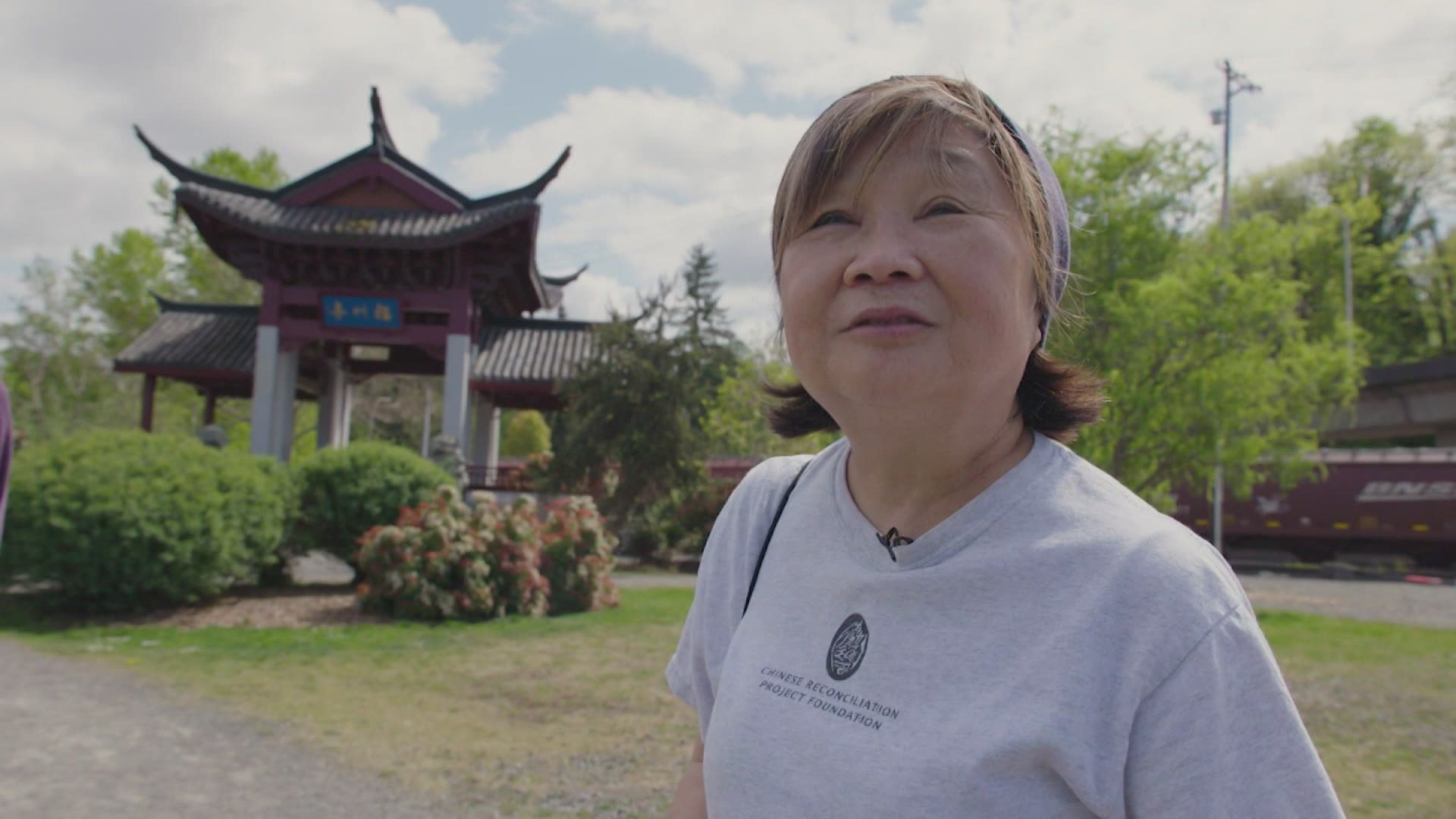 TACOMA, Wash. — A tipping point in Tacoma happened in 1885 when a mob went on a mission to rid the community of its Chinese population.

It’s a forgotten history for some, but others say it continues to be a source of pain, especially in light of the recent rise in reports of hate crimes against Asian Americans. A group of volunteers with the Chinese Reconciliation Project Foundation are confronting this difficult past that still resonates more than a century later.

Posters from 1885 with the message, "The Chinese Must Go," are part of the evidence of Tacoma's determination to drive out the Chinese community in the late nineteenth century.

It is not just a reminder for Theresa Pan Hosley, president of the Chinese Reconciliation Project Foundation. She says it still feels relevant.

"We actually live in a circle," said Pan Hosley. "History repeats itself."

Lotus Perry, an instructor at University of Puget Sound, says there is not enough awareness about what happened to Tacoma’s Chinese community in 1885.

"They came here referring to the United States as the golden mountain. They're here for the gold rush. That quickly died down, and then a lot of them stayed here to build railroads," Perry explained.

In 1873, the Northern Pacific Railway leased land near the railroad tracks to Chinese workers, and that became Tacoma's Chinatown. Around the same time, the national economy went into a slump. The financial situation put a focus on foreign workers, according to Andrew Gomez, an associate professor of history at University of Puget Sound.

"There was a clear connection between a feeling of economic anxiety that was taking place at the time and pairing that with racism,” said Gomez. "That sort of hits this important point in 1882 when the Chinese Exclusion Act is passed, which bars all future Chinese migration into the United States."

Three years later, there were about 700 residents of Chinese descent in Tacoma, which was actually 10% of Tacoma's population at the time. Back then, Washington wasn't a state; it was a territory, and many people living in Tacoma were immigrants. But Chinese immigrants were singled out.

"They're thinking about, 'Why do we have to tolerate them for working so hard and taking lower wages,' right? They become the scapegoat,” said Perry.

At the height of the racial tension, the mayor, Jacob Weisbach, a German immigrant, and other prominent citizens led an anti-Chinese organizing effort.

"At the Alpha Opera House was this mass meeting that brought a significant percentage of the city's white population. Basically outlining what became the terms of Chinese exclusion in Tacoma,” said Gomez.

During this time, the anti-Chinese sentiment was in articles and even advertisements in a local newspaper, the Tacoma Daily Ledger.

The message, "The Chinese Must Go," was delivered with a deadline to leave by November 3, 1885.

"November 3rd, that morning, there is a mob that is eventually composed of hundreds of local Tacomans that go basically house to house and expel the remaining Chinese American population,” said Gomez.

That amounted to about 200 people forced to march more than eight miles through the mud and drenching rain until they reached trains bound for Oregon.

The ethnic cleansing was given a title, the Tacoma Method, and was applauded nationally by some for being non-violent. But a number of Chinese merchants who were in Tacoma on that November day told U.S. officials that it was anything but peaceful. They described an angry mob, some carrying pistols or clubs, who "broke forcibly into the houses, smashing doors, and breaking in windows.” In affidavits, the Chinese merchants, some of whom had lived in Tacoma for more than a decade, described people being rounded up, homes ransacked and valuables stolen. In the days that followed, Tacoma's Chinatown went up in flames.

"One of the Chinese American merchants mentioned watching it burn and mentions that no one tried to halt the burning,” said Gomez.

The ringleaders of the mob, known as Tacoma's 27, which included the mayor, were put on trial.

"Charges are brought against them, but due to a series of legal technicalities, they are let off each time,” said Gomez.

No one was ever held accountable.

Pan Hosley, the president of the Chinese Reconciliation Project Foundation, says the echoes of that day in 1885 are still felt. She said Tacoma’s past is the reason why the city doesn’t have a Chinatown today.

Pan Hosley wants to break that cycle and is working to ensure Chinese immigrants are celebrated in Tacoma.

"I love Tacoma, and I want Tacoma to be a place that can welcome anyone, anybody," she said.

That's why she has worked with a citizens committee and the city of Tacoma to help create the Chinese Reconciliation Park, which is not only a place to look back and learn. Recently, it's also been a gathering spot to rally against the hate crimes reported during the pandemic targeting Asian Americans.

"People of my descent are being shouted at, ‘Go back to your country. You bring the virus,’" said Perry. "This is like, wait a second. I thought we were looking at this as a history of, you know, 'Chinese Must Go.' It is almost too relevant."

At Chinese Reconciliation Park, there are plans to add a multicultural pavilion next. Pan Hosley wants the park to be a welcoming space for people to reflect on the past, ponder the present and move forward with the goal of a brighter future for Tacoma.