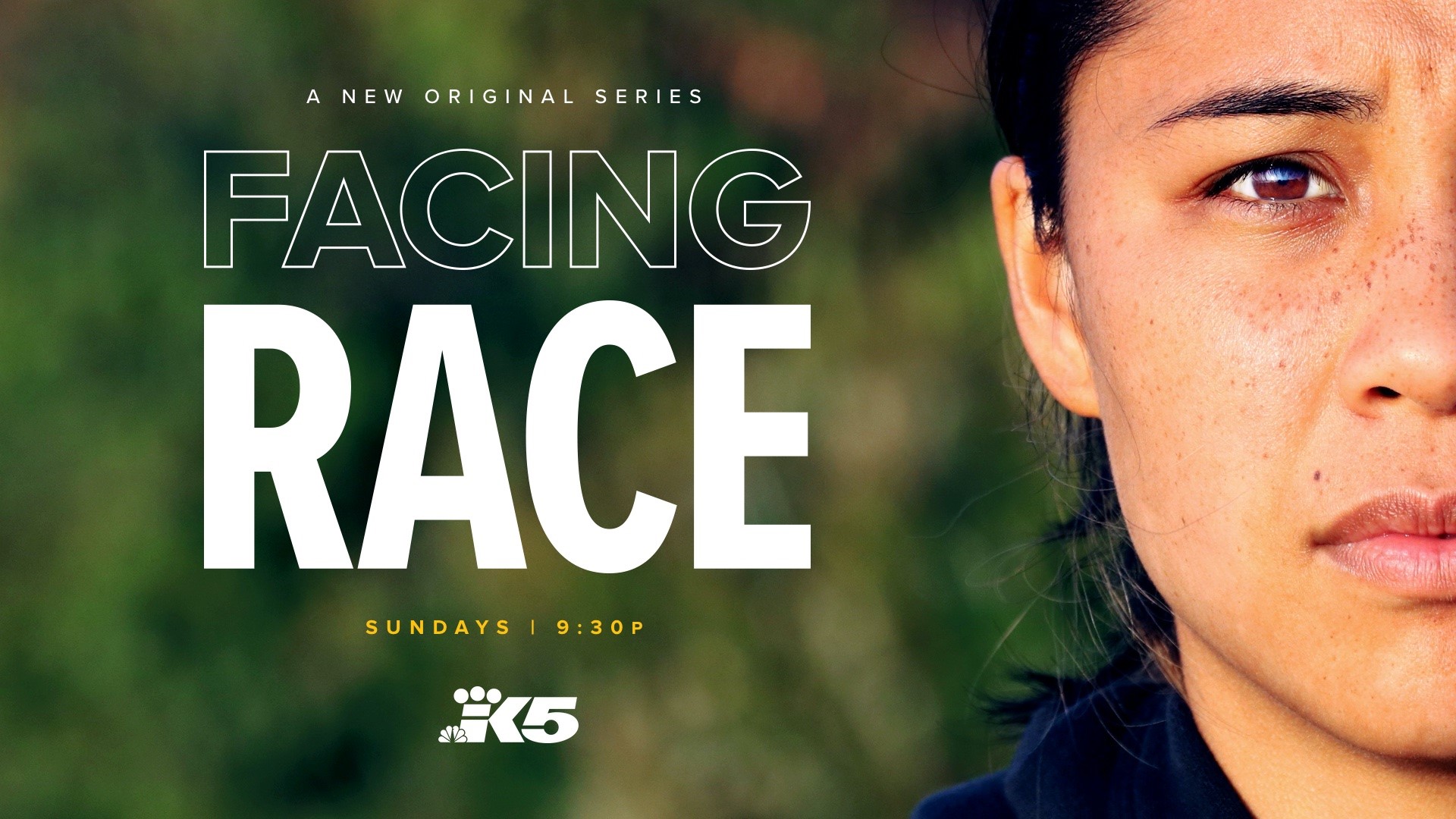 Over the past several months, we’ve seen massive protests across the country calling attention to issues of systemic racism and racial injustice.

For many people, these are difficult, even uncomfortable, topics to discuss.

That’s why, when KING 5’s new show “Facing Race,” airs this Sunday night at 9:30, anchor Joyce Taylor and executive producer Christin Ayers are asking viewers to “be brave” and join them for an honest conversation about the role systemic racism plays in our everyday lives.

"'Facing Race,' to me, is an opportunity for our community to have some really challenging, difficult, honest, candid conversations about what it means to be black, Hispanic, Asian, white, privileged in this country and in the Northwest. What that actually means,” Taylor said.

Each half-hour episode will showcase personal stories from people in Western Washington and their experiences with systemic racism. We’ll also hear from some of the leading voices on racial equity in the country, including writer Ijeoma Oluo, author of “So You Want to Talk About Race,” and historian Ibram X. Kendi, author of “How to Be an Anti-Racist.”

Taylor and Ayers sat down recently to talk about what viewers can expect from the show.

This conversation has been lightly edited for clarity and length.

What is the mission of Facing Race?

Christin Ayers: Our entire purpose in having a show called "Facing Race" is to really confront some of these issues that have surfaced for people anew this summer because of the killing of George Floyd. This is really an opportunity for us to meet the moment as a news organization, and just as people of color who are experiencing what's going on and trying to have these new conversations with people who may not have had the same experiences as we have. Our goal is really to just kind of crack open that door and allow people to feel comfortable talking about issues that they may never have explored, and to take part in this larger conversation that's been happening all across the nation.

Joyce Taylor: It’s also a chance for us to come together around issues that are hard to talk about in an environment that says it's OK to talk about this, even though it's going to be uncomfortable. It's going to be brutally honest. It's going to be challenging and uncomfortable, but we're going to do it together, and we're all on this learning curve together. A lot of people think they understand what it's like to walk in someone else's shoes, but you really can't if you're not a Black or brown person and you're white, just as I can't understand what it is to be white because I'm Black, right? So, it is an opportunity, I think, for us to learn more about each other and come together in a moment where our country is so divided.

Who should watch this show?

Joyce: "Facing Race" is a show for everyone. If you are Black or white, if you're Native American, if you're Asian, if you're young and old. This show is for everyone who wants to be brave and challenge themselves to learn more about people who don't look like them, who don't live like them, who may not have the same socioeconomic background, certainly ethnic background. It's a chance for them to understand better their neighbor.

What do you hope people will take away from this show?

Christin: My hope is that when people actually watch "Facing Race" that they have a desire to educate themselves a little bit more, that that fire is kind of sparked wanting to know more about racism and race, their friends of color, and wanting to actually talk and look at their surroundings and figure out where racism exists in society in ways that we haven't thought about.

Joyce: My hope is that people who are watching our show will look at how they're living. They look at the classrooms that their kids are in and ask themselves, is the curriculum reflective of the people who live in our community? Are they learning about Black history one month a year, or is Black history part of their curriculum? That they will look at the disparities in discipline in high school, which the facts tell us are disproportionate for students of color compared to their white peers for the same offenses. That they'll look at our justice system. That they look at their corporate environment and ask themselves, why are there no department heads of color in my all-white environment? Or why have people of color not been able to rise through the ranks? Or why are we not recruiting people of color? Or maybe they are? So, if maybe this company over here is doing that, they will look at their surroundings and say, what are companies doing right? What are schools doing right?

How is Facing Race different from other coverage about race?

Christin: We are kind of dimming the lights, stripping everything away and having some very real conversations about race. That means centering the voices of people of color in a lot of ways, but also inviting white people to come into the conversation to listen, to participate and be empowered to make a difference as well.

Joyce: I think what makes this really different from your everyday newscast is that it is deeply personal for the people we talk to. It takes a lot of courage to share some of these personal stories of what it is like to be Black in America. It's not easy to talk about it.

These people who we talked to in our own community have really stepped up for this show. They have shown a lot of courage and they've said to us they are doing this because this matters. They think that we're in a moment where them sharing their personal stories could make a difference, or they wouldn't be doing it. We know the critics are going to be out there, and they're going to be judging our show; bring it on. But I would say watch it first, and listen first, to some of these people who live all around us, our neighbors, our friends, and listen to their stories.

What if someone feels like they have no idea how to talk about race or no idea where to start learning about these issues?

Christin: So many people have been expressing that they're really afraid to have these conversations about race. They're afraid they'll say the wrong thing. They're afraid that they'll be called racist, they're afraid they'll offend somebody. This is the show for you. The reality is that even the race experts that we talked to told us, they did not want to be called experts on this because there is so much to learn. This is an opportunity to dip into that conversation at whatever level you are at and have us meet you there so that you learn to be bold and brave in these conversations to listen and to make a difference somehow without the fear that comes with talking about race.

What does it mean to you to be working on a show like "Facing Race"?

Joyce: I have worked in television news for more than 35 years, my entire career. I have wanted to do a show that really deals with my community, not just my Northwest community, right, but my African American community or my community of color, in a real way, in a consistent way, not just in February, or when this story happens, or when that story happens, or too often when something bad happens, right? So, to finally at this point in my career be able to do a kind of show that I know is going to have impact, I know it's going to be meaningful. It's going to be educational. People are going to every week come away knowing something they did not know before, knowing someone better than they did before they watched the show and understanding people around them in a way that maybe they had not considered. I know that we really do have more in common than we are different, but in this time, especially when I'm raising my kids, we don't see that ... all ways that we have things in common. So, to be able to do something, a show like this, where I hope that we will be able to show all the beautiful ways that we're different, but the ways that we are alike, is just really meaningful. Because let’s be honest, it's just way overdue.

Christin: I've spent most of my 15-year career in broadcast news in front of the camera, and I am getting the opportunity to step behind the camera as executive producer for "Facing Race" to help drive the content of the kinds of interviews that we're doing, the kinds of stories that we're doing. I never imagined that I would get the opportunity to tell these really important stories that are personal to me as a Black woman. It's the honor of a lifetime to do a show like this to really be able to spend time in these stories with these people and tell stories that are also so personal to them.

Is there anything else you want people to know about the show?

Joyce: All I can say is that we're putting our hearts into this show. We’re going to do our best every week to bring you the best of the best in terms of experts, content and storytelling. Everyone has a story, by the way, and we have found some of the most interesting stories that we think will help educate people about race and racism and profiling and the lack of justice in our community. We hope that they'll come along for the ride with us.

Christin: I've learned so much from this show that I didn't know, that my own experiences hadn't taught me. It truly is a space where you can learn no matter who you are, where you're from, what your background is. There is something in this for everyone.