Facing Race is taking you back to the Yakima Valley in the 1960s, where farmworkers fighting for a better life labored under dire conditions to feed the country. 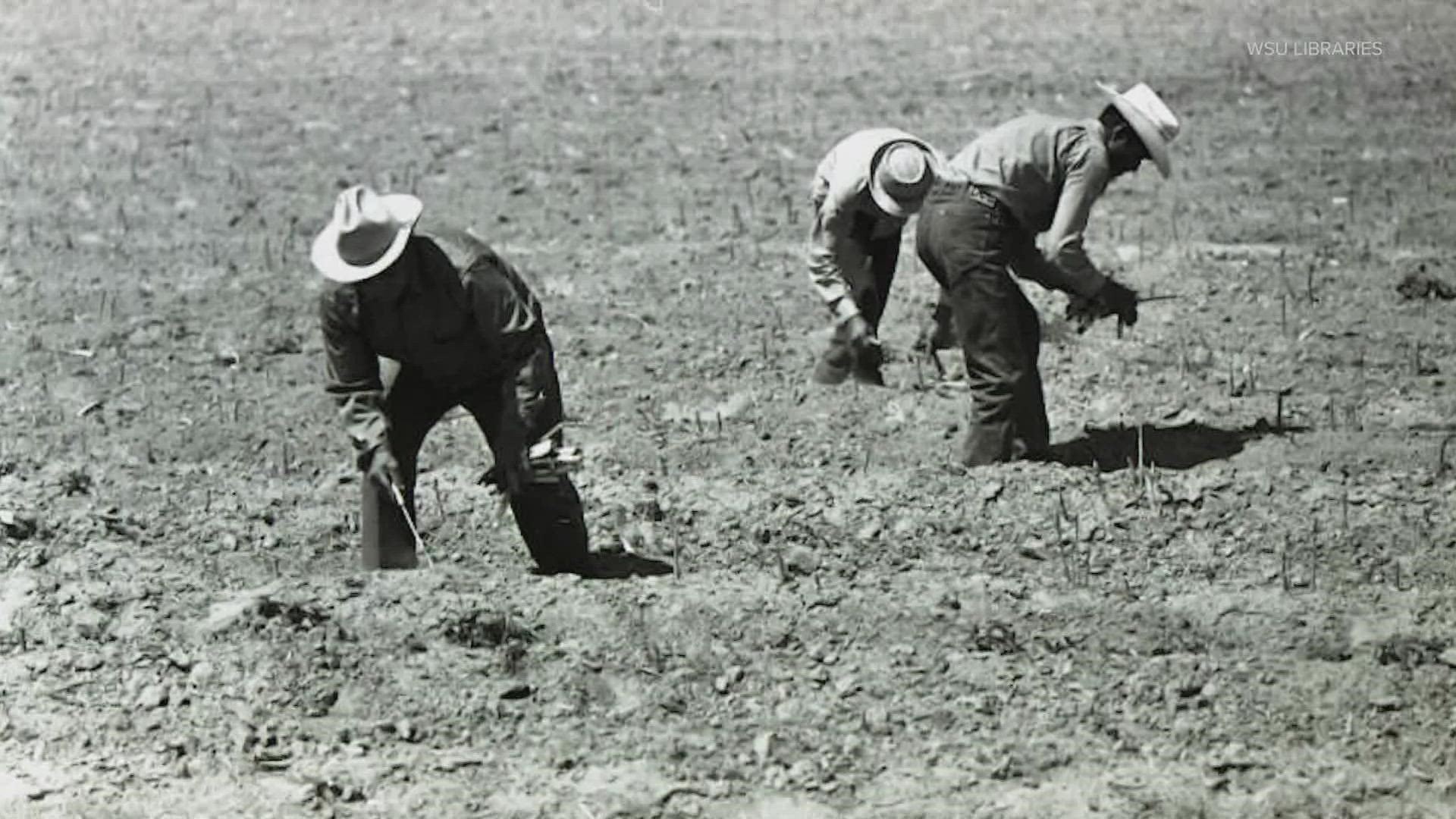 SEATTLE — There's nothing quite like reconnecting with old friends. Especially when that friend is documentary photographer Irwin Nash.

"I always used to refer to him as our secret weapon. That was his name, Secret Weapon Nash,” said retired Judge Michael Fox.

Fox is on a mission to help Nash's photos become much more than memories. Also committed to that cause is Lupe Gamboa, a longtime farmworker activist.

"He was a kid picketing on campus when I met him,” Nash added, referring to Gamboa.

The pictures that brought them together in the first place are the reason for the reunion. It's a collection with more than 9,000 photos.

"It is unfinished work,” said Fox.

The work began in the 1960s and 70s in the Yakima Valley. Nash set out to shine light on labor camp living conditions for farmworkers. Many were Hispanic and some came from Mexico, eager to work. What they found were jobs harvesting hops, making as little as $1.25 an hour.

"This was taken in the middle of the night,” said Nash, referencing one of his photos of a labor camp. To this very day, he remembers the people in his pictures.

1 / 20
Courtesy of Irwin Nash, Images of Migrant Labor Digital Collection, WSU Libraries
Three young boys are sitting in chairs at the Escuelita Cultural Center in Granger, Washington in 1970 or 1971.

"From what I saw, they weren't treated like human beings. They were treated like tools, almost like animals to help in the crops,” said Nash, who added that race and greed were among the reasons why. “It's very disturbing. People shouldn't be treated that way."

Nash decided to do something about it. Teaming up with Fox and Gamboa, the trio took action to help farmworkers organize, and at times that meant trespassing at labor camps.

"They are threatening to put all of us in jail if we don't leave within five minutes," Nash reminisced.

On that day, Fox and Gamboa were arrested.

"They took us down, booked us, and took our pictures,” said Fox.

Once they were released, they went right back.

"We took that picture with the two of us giving the power handshake over the no trespassing sign. That's one of my most treasured possessions," said Fox.

At Washington State University in Pullman, Dr. Lipi Turner-Rahman has looked at the same picture.

"I just loved it. They look like they are having so much fun. They just broke the law,” she said.

Dr. Turner-Rahman, the manager at the Kimble Digitization Center, says it is one of the thousands of photos in the Irwin Nash Images of Migrant Labor Digital Collection that is now owned by Washington State University.

In the depths of the WSU Terrell Library is where the collection sat for many years before about 100 of the photos were put online.

Laura Solis and her partner Mike Fong made the discovery while doing an ancestry search. That is when they stumbled on some of Irwin Nash’s collection. Solis did find a photo of a relative, Elisia Elizondo.

"I didn't know at the time I saw her photograph, but she was my great aunt,” said Solis.

Elizondo's husband passed away. She was left to care for their children on her own while also working in the fields from dawn until dusk.

"It meant something to my cousin Adam who wrote this lovely tribute to her,” said Solis, as she held the written words in her hands.

"He said, what kind of man would I be if I did not get up every day to provide for my family. Because of her I will always value the little things in life, that she worked so hard every early morning and long hot day. I love you grandma Elisia Elizondo, and thank you for showing me the way.”

“I can never read that and not choke up,” said Solis. "I recognize my own family in what he said. I recognize the sacrifices. They did that for us, and I think other people have that story, too."

It’s the untold stories coming to the surface, and WSU wants to hear more.

"We started up a conversation about what would it take to get some of these digitized and online,” said Fong.

It took money, with WSU securing an $8,000 grant and private fundraising bringing in thousands of dollars. Now the collection is up, and the hope is that more people in the pictures will be identified.

For Solis, it’s about her community finally being seen thanks to Nash's photographs.

"In a sense, it has improved greatly. Farmworkers almost have equal protection under the law because of the efforts of people like Irwin and Michael and myself, bringing attention to the issue and organizing and striking,” said Gamboa.

"It really changed my whole perspective on life. Where I fit into a social struggle. It’s one of the most meaningful things in my life,” added Fox.

The three friends are proud of the mission they started more than 50 years ago. What they want now is to see their work have a lasting impact.

"To get some political action on behalf of the people who were being mistreated, that's why I did it,” said Nash. “You hope to help a little bit."

The Nash Photo Collection Facebook page regularly posts Nash's photos in an effort to identify more people in the pictures, and add more context to the collection.

Next year, Nash's photos will be the focus of a museum exhibit at WSU.