Q&A: What's environmental racism and how do we end it?

Mustafa Santiago Ali, an environmental justice leader, says systemic racism is to blame for people of color bearing the brunt of environmental problems. 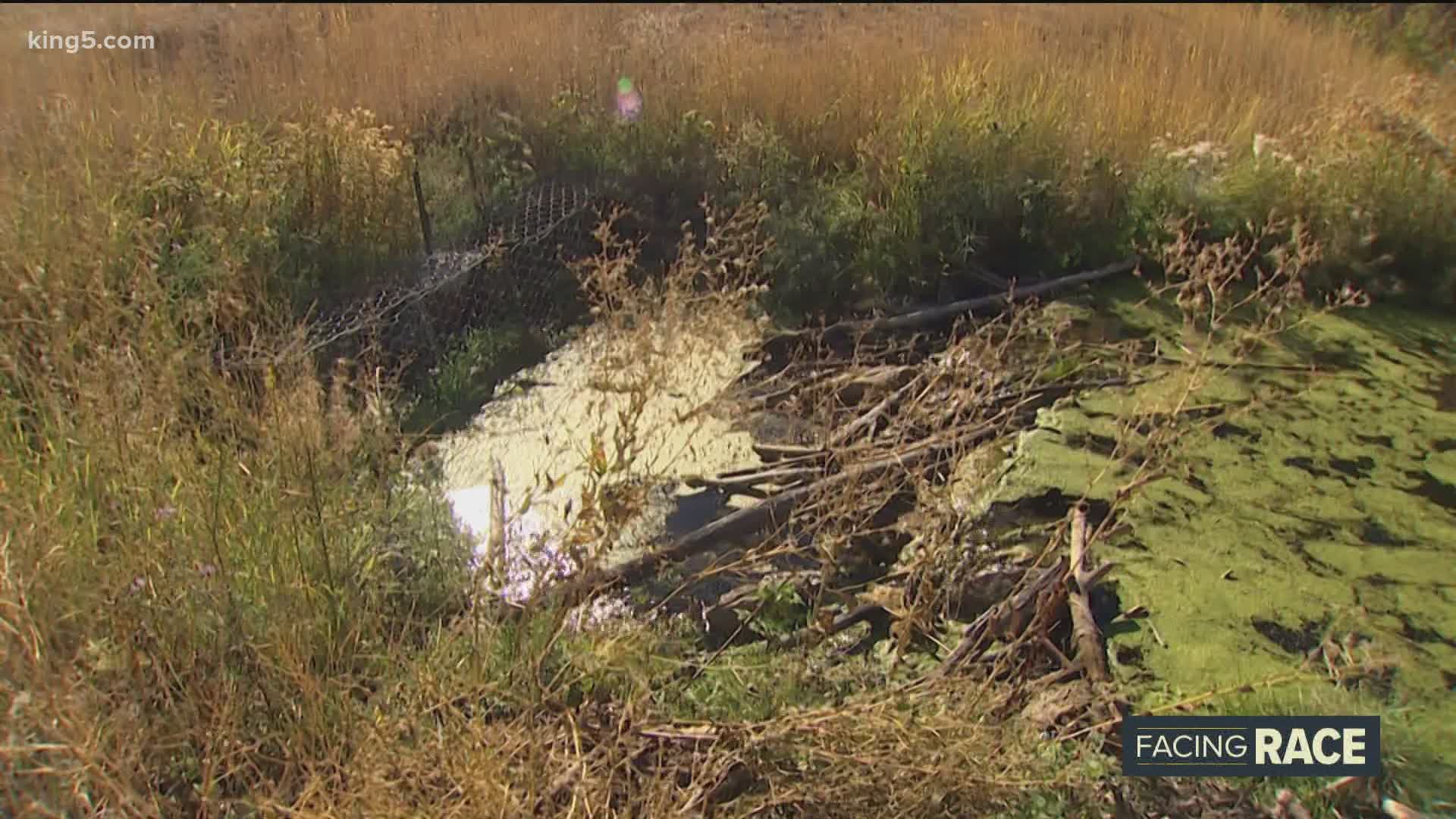 Is there a connection between race and the environment? Absolutely, say environmental justice advocates.

Environmental racism is the disproportionate impact of environmental problems, like pollution or public health crises, on communities of color.

“In our environmental laws there have been these gaps that have allowed Black and brown and indigenous communities to be the recipients of pollution that we would never allow in upper middle income or wealthy white communities. So, it goes back to systemic racism,” said Ali, who spent more than two decades at the Environmental Protection Agency.

Ali sat down with KING 5’s Christin Ayers to talk about how environmental racism hurts communities of color and what we can do to end it.

The following is a partial transcript of their conversation. Some of the questions and answers below have been lightly edited for brevity and clarity.

Christin Ayers: What is environmental racism?

Dr. Mustafa Santiago Ali: Environmental racism is the disproportionate impacts that continue to happen in communities of color, lower wealth white communities and on indigenous lands. What it really means, it’s the sacrifice zones where people place everything that nobody else wants: coal fired power plants, petrochemical facilities, waste incinerators, sewage treatment facilities, living in low-income housing with lead and other dangerous toxins. And they are the dumping grounds for our most dangerous pollution but also taking away people’s ability to actually participate in the framing out of what their community should look like.

Ayers: Why do we see certain communities where the kind of pollution that you just talked about is more rampant?

Ali: Systemic racism and how it is played out in policy. If we look at policy in relationship to housing, we know about redlining and restrictive covenants and zoning. And some people get residential zoning where others get light industrial or industrial, and their homes are located close to the things that are allowed to be in those spaces.

And policy and transportation. We know historically that transportation, our roads and highways, have been used to break up communities, to deliver wealth to certain communities and to dump off pollution in other communities.

In our environmental laws there have been these gaps that have allowed Black and brown and indigenous communities to be the recipients of pollution that we would never allow in upper middle income or wealthy white communities. So, it goes back to systemic racism, which is, at its core, the thing that holds our country back. But it has found its way into policy and into many other aspects of life in our country.

Ayers: What is the impact of this sort of environmental racism on the community? What sorts of health outcomes do we see because of that?

Ali: We’ve got 100,000 people who are dying prematurely every year from air pollution in our country. That’s more than are dying from gun violence, more than are dying from car crashes and a number of other issues. And also we have millions of people who are getting sick. They’re getting sick. There are cancer clusters across our country because of the exposures that people are dealing with. Liver and kidney disease and lung diseases.

There’s a toxic loading that actually happens inside of these communities cause sometimes we’ll have multiple sets of facilities and pollution from highways and a number of other things that are happening, and that takes a toll on the body. It takes a toll on the immune system, which then makes you vulnerable to so many different types of conditions and of course all of the research, whether from Harvard or a number of other locations, have shared with us that if you have hypertension, if you have cancer, if you have a number of conditions, that you’re more likely to get the virus.

There are over 100 different statutes and laws that have been weakened or rolled back. In particular, the clean car rule. Basic common sense stuff of making sure that less pollution is coming out of the tailpipes of cars and trucks and at the same time, helping people to get better gas mileage so they have more disposable income. That’s one that plays a big role, not only in the pollution that we’re finding in our most vulnerable communities, but also playing a role in the warming up of our planet.

When you pull yourself out of the clean power plan, which again just made sense – trying to limit and mitigate pollution that is going up into our air. Again, how do you care about the people in our country if you continue to expose them to more and more pollution.

Ayers: What are some of the solutions to try to address these health issues, these pollution issues in these particular communities?

So, we’ve got to make sure that the cop is on the beat, if you will. It’s always interesting that we’re willing to place huge amounts of money into pushing police into Black and brown communities, but when it comes to the policing of the entities that are there that are causing these problems, then the current administration has not seen value in that and has significantly cut what’s happening there.

The other part, which is a bright spot, is that we have a huge opportunity around the new clean economy to create millions upon millions of new jobs. And that will help to minimize and limit these impacts and eventually get rid of them, but it will also create an opportunity to build wealth in these communities. Because we cannot have a conversation about systemic racism and not talk about the disinvestments that have happened and the extraction of wealth from Black and brown and indigenous communities.

So, a new clean economy gives us a chance to be able to move forward with a 21st century paradigm where justice and equity and people are included in a very real way by helping them to build wealth which then of course translates into additional time for folks to get engaged on so many different issues and of course, you’ve got to vote.

Ali: The movement for Black Lives actually has environmental justice as one of its platform issues. You’ll find on Capitol Hill as well that there are now a number of pieces of environmental legislation.

Yes, in the title is environmental justice but we see our environment as where we live work, play, pray and go to school. That means all the things we deal with on a daily basis are attached to the environment, and we see it in a much larger holistic paradigm than some might initially think.

You have to continue to evolve, and that means you’ve got to listen, you’ve got to learn, you’ve got to continue to engage with folks to begin to understand how systemic racism literally touches all of our lives, but as this disparate impact on people of color and in particular African-Americans. So, if you’re truly trying to be an ally, if you’re trying to be a white ally, then that means you have work to do, both in the learning and in the conversations. You will be in spaces and places that sometimes POC are not. And if you’re an ally then that means when you’re in those spaces that you have some responsibility, responsibility in helping to check some of those situations and speak truth to power and be a bridge sometimes.

Whether we’re talking about a policeman with their knee on someone’s neck or we’re talking about the suffocation of folks from COVID-19 or the fact that many of our communities have been saying, ‘I can’t breathe. We can’t breathe,’ in the context of the pollution that is so closely related to our communities, that is how systemic racism has played out and in so many other ways.

Ayers: How does it manifest on indigenous land?

Ali: Indigenous land has many of the similar problems depending on which part of the country that you’re in. Sometimes they’re dealing with pollution coming out of power plants, coal fired power plants or oil plants. They’re also dealing with significant water quality issues, and we know our indigenous brothers and sisters are very tied to the land. It’s a part of the culture. So, when pollution, whether it’s coming from farming practices or coming from runoff from other sources, it impacts the water quality, which impacts, in many instances, salmon or other fish, which are a part of the culture.

And in many instances, indigenous brothers and sisters have done the least to contribute to the impacts that are going on, but unfortunately are the recipients of them. They are dealing with so many different impacts.

We have to focus on what’s happening on indigenous land whether in the urban context or the rural context. The needs are great, and we should be focusing on rebuilding the infrastructure the way they see fit so they move from surviving to thriving.

The narrative was if you allow us to put this plant in your area, jobs will come with that, and if you do any type of serious analysis, we’ve found that that was not the case and the jobs that many times were offered were lower paying jobs, and of course folks would bring in folks from other parts of the country to do the higher paying jobs.

If you look at an area like cancer alley, where when you go there is between Baton Rouge and Louisiana, there are petrochemical facilities as far as the eye can see,

If you go across the country, you will be hard-pressed to find one of these toxic-emitting facilities that are in a wealthy community. It just doesn’t happen because they’ve always had access. They’ve had access to legislators. They’ve also had the resources to be able to move to legal action to be able to get good attorneys to push this stuff away from their communities into other communities.