By the 1920s, nearly 83% of all school-aged Indigenous children were taken from their homes to boarding schools, including some in the Pacific Northwest. 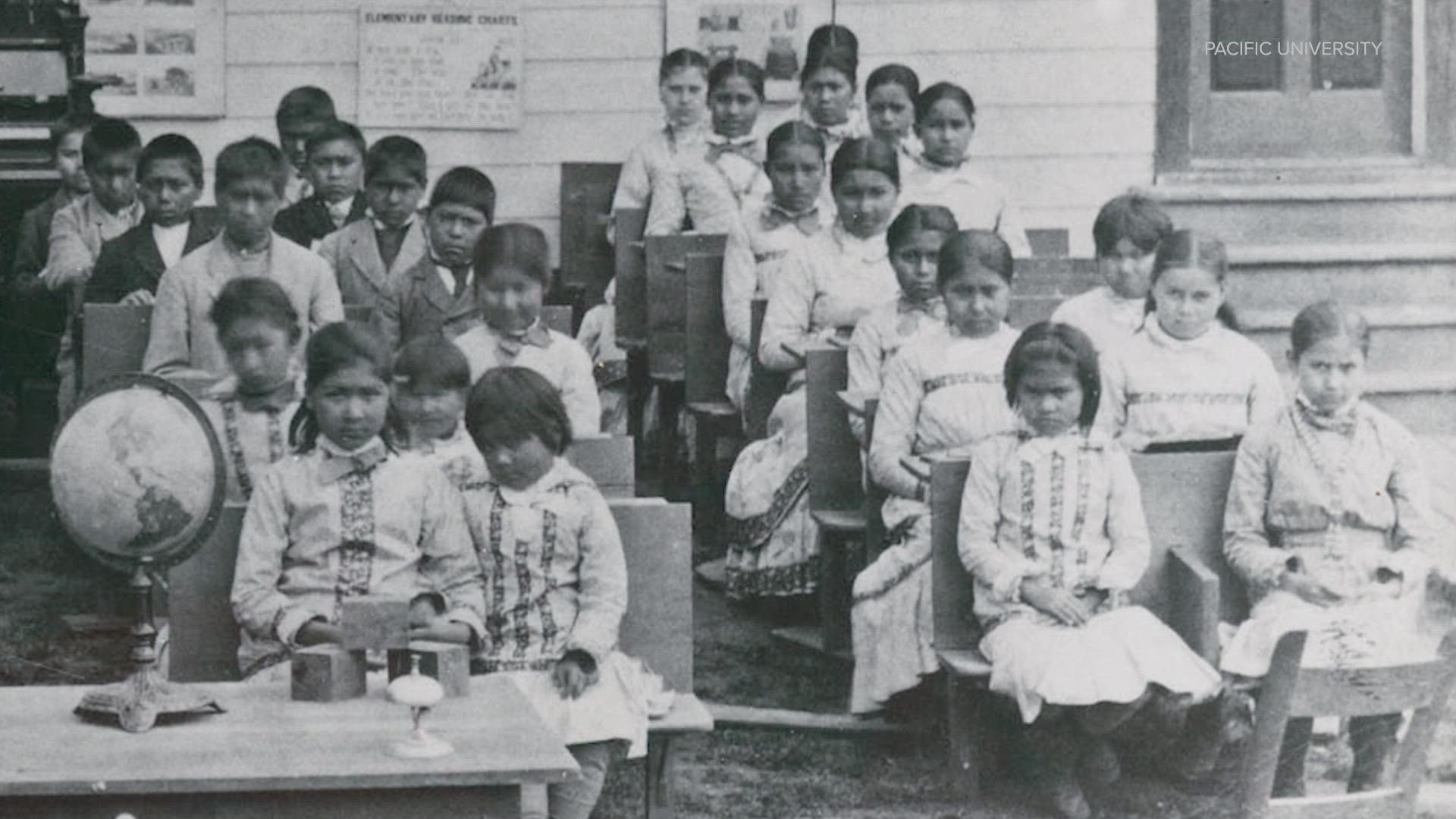 SEATTLE — WARNING: This story has disturbing details about residential and boarding schools. If you or someone you know is affected by this, please contact the 1-800-273-TALK (8255) to speak with a crisis counselor. In addition, this resource list from The National Native American Boarding School Healing Coalition is available.

People from all over the U.S. and in Canada gathered for Indigenous National Day of Remembrance on September 30. The remembrance ceremonies honored Indigenous children taken from their homes and forced to forget their languages and customs in boarding schools funded by the government.

Matilda Sampson, attending an event at Fort Spokane — a former Indigenous boarding school, survived one of those residential schools.

“I wasn’t used to wearing uniform clothes and not allowed to talk our language and tell our stories,” said Sampson.

It’s a painful hidden history Sampson and many like her endured, “I remember everything was taken from me.”

Native boarding schools were initially created by the U.S. and Canadian governments in the late 1800s to force Indigenous people to assimilate at any cost.

Sampson, a member of the Adam Lake Band, attended Kamloops Indian Residential School in British Columbia in the early 1970s. Recently, a grim discovery of 215 Indigenous children were found buried near the school. This was shocking, but not a surprise to Sampson.

"Over the years, they had said there were kids buried behind the school," Sampson said.

Her experience at the school was not one-of-a-kind. There were hundreds of them across North America. According to the National Native American Boarding School Healing Coalition, there were more than 350 Indigenous boarding schools across the U.S. More than 60,000 Native American children were placed in these schools. That’s nearly 83% of all school-aged Indigenous children.

The schools were the brainchild of U.S. Army Colonel Richard Henry Pratt. Pratt’s infamous words and mission were “Kill the Indian, Save the Man.” His practices spread from the first Indigenous boarding school in Pennsylvania to the second one right here in the Pacific Northwest.

Forest Grove Indian Training School was located 40 miles west of Portland. More than 300 Indigenous children were forced to go there.

According to Eva Guggemos, an archivist at Pacific University in the city of Forest Grove, “The superintendent would write to the Indian agent, ‘I need children’ to bring to this boarding school. He would go to the reservation and bring them back.”

Over the past 10 years, Guggemos’ research has been locating the remains of Indigenous children who never made it home. She has worked with tribes from all over the Pacific Northwest.

The government relocated Forest Grove Indian Training School in 1885 to Salem, Oregon. The name changed to Chemawa Indian School. The mistreatment of the children continued, and the number of deaths rose, according to Guggemos.

Fredrick Lane, from the Lhaq’temish Tribe attended Chemawa in the 1980s and has never forgotten about the children buried in the nearby cemetery.

On Indigenous People’s Day, Lane followed his heart and drove from Bellingham, Washington to Chemawa to pay his respects to the children who never made it home.

“Those children are with us, protecting us, guiding us, helping us come this way,” said Lane.

He organized an event that brought people like SuAnn Reddick, a former Chemawa employee, to the gravesite. Reddick said that the original grave markers were bulldozed in the 1960s.

"These plates do not necessarily relate to the location of the remains of the children," Reddick explained.

With the help of Guggemos and an old hand-drawn map, the two were able to convert the information they gathered and put it on a public website.

According to Guggemos, “We have hope that perhaps looking at the list when children died, plus maps like this, looking at where the gaps are -- we may be able to begin to work in finding unmarked graves in the cemetery. We may be able to identify who was buried there."

With this digital database now available to the public, tribes from all over the country can find out who exactly is buried at this cemetery, their tribe affiliation, where they are located and when and how they died.

Following the recent discovery of children’s remains up in Canada, the U.S. Department of Interior Secretary Deb Haaland will launch an investigation into U.S. boarding schools. The assigned task force will submit a report to Secretary Haaland by April 1 about what they discovered and how they should proceed.

About the author: Dr. Edmundo Aguilar is an expert in cultural studies with a focus in Multicultural Education and Ethnic Studies. An Assistant Teaching Professor at a local university in Seattle, Aguilar has deep and varied contacts with indigenous communities throughout Washington and Idaho, specifically the Spokane and Couer d' Alene tribes.