Asia Jones started a Facebook group to expose racist people and businesses. Members of her group have helped to get dozens of people fired from their jobs. 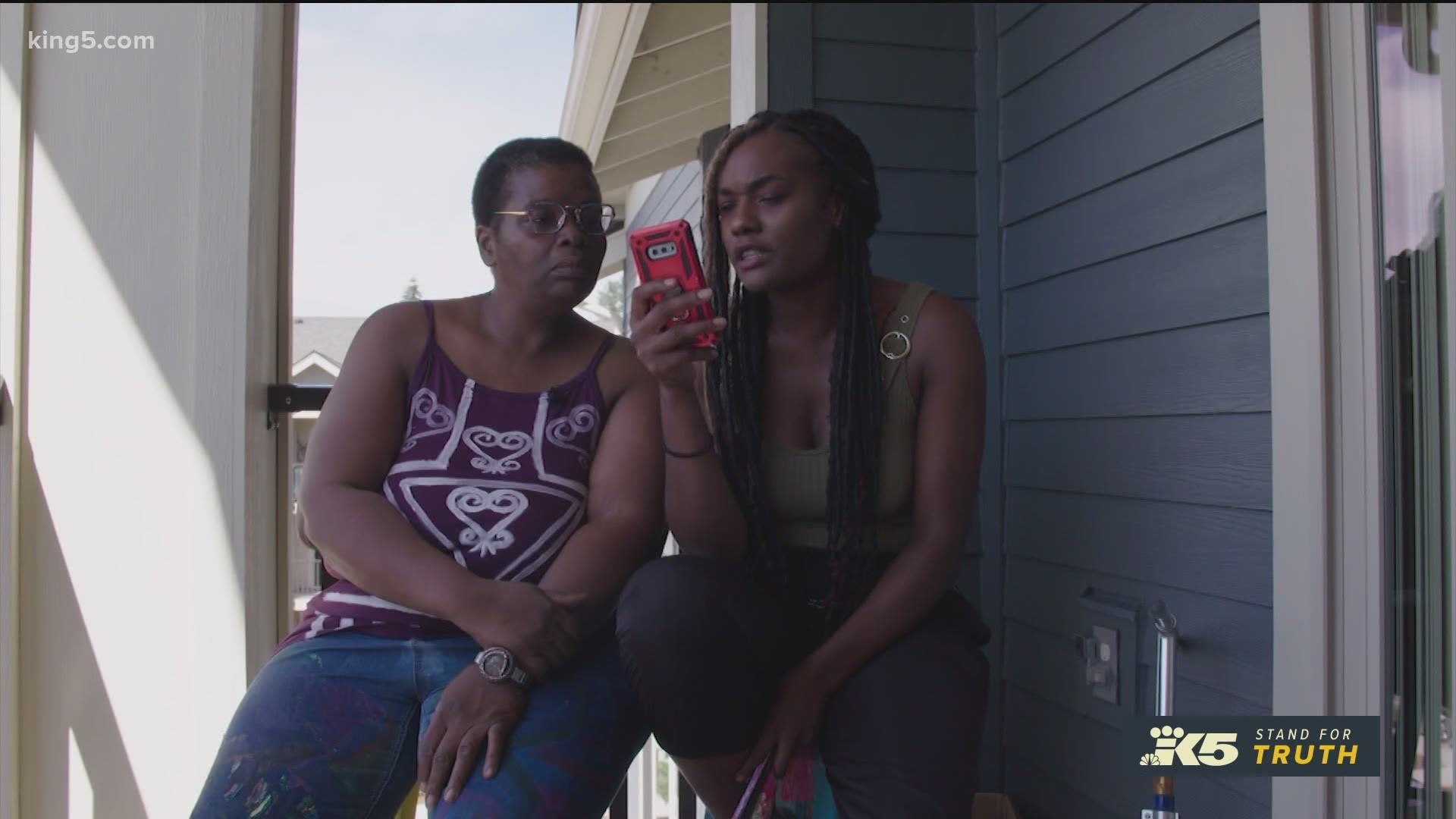 From their Auburn apartment, the two run a Facebook group called “Exposing Racism in the PNW.” It’s an online community of nearly 13,000 people who share the common goal of tracking down racists in the Pacific Northwest and calling out their behavior.

Jones created the group in May, weeks before a Minneapolis police officer killed George Floyd. It was an effort, she said, to help people of color in the Pacific Northwest “feel safe” and avoid racist situations, like the ones she’s encountered throughout her life as a Black woman.

"I just wanted people to be aware of the people they might be around and the companies they might be supporting because I would not trust a racist business making my food or doing something for me. I wouldn’t want to give them my dollars, ya know?” Jones said.

The group’s strategy to expose racists is part of a growing online movement known as “cancel culture,” where people publicly shame and withdraw support for businesses and individuals who do or say something that’s considered objectionable or offensive. As Black Lives Matter protests have erupted nationwide in recent months, people on social media have become quick to highlight racist behavior and “cancel” the people behind it.

“The impetus for cancel culture is people's frustration that racism has been silenced—that people have not been able to just report racism, period,” said Dr. Ralina Joseph, a professor of communication at the University of Washington. "The individuals who posted (the racist behavior) say this happened and the other people cosign those actions and say, ‘This is wrong.'”

New Yorker Amy Cooper was fired from her job after she was called out on social media for calling the cops on a Black birdwatcher in Central Park in May. A white San Francisco couple also received nationwide backlash for confronting a Latino man who wrote “Black Lives Matter” in chalk outside of his home.

“That’s the first thing that people revert to is, ‘Where do they work?’” Jones said. “You don’t deserve to be working in public if you are a racist person.”

Members of “Exposing Racism in the PNW” have helped to get local people fired for their actions. Jones said dozens have lost their jobs after they were exposed in the group, including Brandi Potter of Olympia and Jenni Clelland of Lake Tapps, who were fired for what they posted on social media.

"I don't want it to just end at someone being fired,” Jones said. “We should be able to do something else and move forward. You know, because that really doesn't solve anything for anybody.”

Jones said she doesn’t usually follow up with the people who’ve been exposed in her Facebook group to find out how being “canceled” impacted their lives.

So months after they were fired, KING 5 tracked Potter and Clelland down.

‘I definitely regret posting that’

Brandi Potter, an Olympia resident, was fired from her job as a front desk receptionist at a mental health facility earlier this summer.

In June, she posted a meme that said “All Lives Splatter.” Others have shared the meme following Black Lives Matter protests in the streets. It's popularity took off when one protestor died and another was injured after being struck by a car on I-5 in July.

“In my post was nothing racial. It was just, you know, like, ‘Hey, stop wreaking havoc on our cities, stop looting, stop burning buildings, stop, you know, breaking glass,” Potter said. “My thinking was just to get people out of the roads. I understand that there are protests and everything like that, but I don't believe they need to be like on our main streets or on our highways.”

“I definitely regret posting that,” she added.

Members of “Exposing Racism in the PNW” shared a collage with Potter’s meme and her personal information, like details about where she worked. They also shared a picture of Potter’s friend, a woman who had ties to a white supremacist organization.

Credit: KING
Brandi Potter shared an "All Lives Splatter" meme on Facebook. In June, her post was shared in the Facebook group "Exposing Racism in the PNW."

Potter described what happened next as a “witch hunt.” She said hateful messages flooded her inbox and protesters showed up outside of her office seeking to get her fired.

“People (were) spreading my face all over Facebook as being a racist person and slander,” Potter said. “I don't think (the group’s approach is) effective. I think they're just ruining people's lives, and it doesn't matter what the person says to try and defend themselves because they're not listening to it. They only see that one side of the story.”

Potter describes herself as a Mexican-American who doesn’t “believe in racism.”

“I don’t believe that race has anything to do with privilege,” she said. “I believe that all lives matter. Race to me is race.”

After she was called out, Potter said she took down her post and issued an apology on social media. She said the experience of being “canceled” will discourage her from posting her political opinions on social media in the future, and it’s led her to avoid having any conversations about race.

“I don’t like talking about racism. I really don’t,” she said. “It's definitely easier just to kind of back away from that stuff and just be like, ‘You know what? I'm staying out of it.’”

Dr. Joseph, the University of Washington professor who teaches a racial awareness class called “Interrupting Privilege,” said it’s common for people to shut down after they’ve been labeled as a racist.

“Being identified as a racist is like being identified as a child molester or a murderer, right? There's nothing worse in the world,” Joseph said. “I think that what we need to try and do is think about individual actions and behaviors and try and separate that word from people. Just bringing that word of ‘racist’ or ‘racism’ in shuts people down from being able to actually talk about their actions.”

‘It was a total accident’

At first, Jenni Clelland struggled to describe the actions that got her fired from her job at a Lake Tapps preschool in June.

“I’d rather not say,” Clelland said.

Clelland was exposed in Jones’ Facebook group after posting that she “kinda wanted to run” over a Black Lives Matter protester who she passed on the highway.

Members of “Exposing Racism in the PNW” shared Clelland’s post, along with messages like “Let’s get a racist fired today.” When the news of Clelland’s firing hit the page, hundreds of people in the group chimed up in celebration.

Credit: KING
A screenshot of the Facebook post Jenni Clelland's wrote after passing a Black Lives Matter protester on the highway.

“People will call me a racist. It was a total accident. It’s not what I meant,” Clelland said. "And it hurts me because I'm the most caring person anyone could ever meet."

Clelland said she wrote the post because the protester was near her house and she was concerned about the safety of her family.

“I totally agree, Black lives matter, all lives matter. I mean I had her back,” Clelland said. “There’s no way I’m going to run her over…I’ve learned to be more careful with my words, my posts. To be more sensitive to what I post. I get why I got fired.”

Clelland said she doesn’t believe racism is a problem in the United States. She struggled to answer questions about the reason why people are participating in Black Lives Matter protests across the country, and she showed little knowledge of the related current events, like the killing of George Floyd.

“I don’t know (why they are holding signs),” Clelland said. “I know that the cop did kill that one guy. But I didn’t even see that, what happened, because I don’t watch TV. I just heard about it.”

Jones watched clips from Clelland’s and Potter’s interviews with KING 5. She said she was surprised to see that Clelland didn’t do research after the group called her out, and she was disappointed to find out that it shut Potter down from wanting to talk about the subject of race.

Dr. Joseph, the UW professor, said what’s needed in the fight against racism is a way to create education and structural change together.

Ibram Kendi, the bestselling author of "How to Be An Antiracist" and the founder of the Boston University Center for Antiracist Research, said he believes that people who acknowledge their racist actions and seek to “repair” and “transform themselves” after they’re called out should not be canceled.

Jones admits that canceling alone doesn’t “solve racism.” But she’ll continue to expose racist behavior, she said, because it solves something else for her group of 13,000.

“I just think it solves the problem for the minorities and the people who don’t like racism," Jones said. "It brings us a sense of peace. There’s not much we can really do, but with this we have a little peace of mind.”