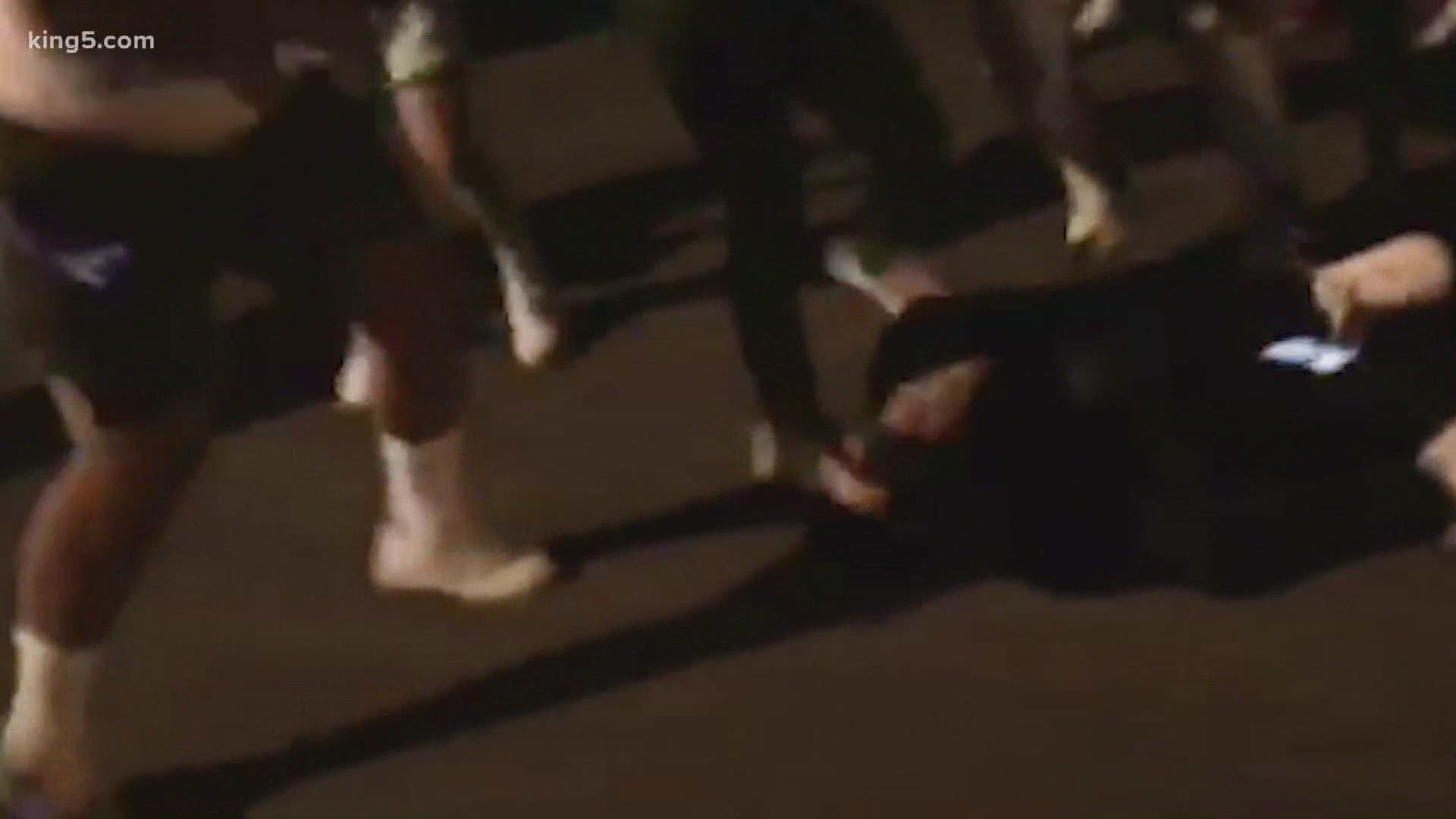 SAMMAMISH, Wash.— Two teenagers who accused four football players from Eastlake and Eastside Catholic high schools of violently assaulting them in an August 2019 parking lot brawl that was captured on video claim police and prosecutors denied them justice.

Rico Martinez and Matt Boczar, two of three alleged victims, said they were disappointed to learn the King County Prosecutor’s Office declined to charge anyone and that a Sammamish city prosecutor dropped a charge of misdemeanor assault filed against one Eastside Catholic player earlier this year. Martinez and Boczar, who were both Issaquah High School students at the time of the physical altercation in Sammamish, said prosecutors based their decision on incomplete information they received from police.

“I feel like (the football players) should have got charged because what they did was completely wrong,” said Boczar, who was 17 at the time of the August 23, 2019 brawl.

The city and county prosecuting attorneys on the case each cited several reasons for declining charges, including a lack of evidence, inconsistent information and uncertainty over whether the alleged victims and the suspects acted aggressively in the form of “mutual combat” or “self defense.”

King County Deputy Prosecuting Attorney Michelle Larson also noted in her decision that there were questions about the alleged victims’ credibility. The case was hampered, she said, because they did not come forward right after the fight. She stated there was a “three-month delay in reporting,” adding that the alleged victims "weren’t willing to cooperate,” so “police couldn’t investigate” until three months later, according to records obtained from the prosecutor's office.

“It makes me very angry. It wasn’t fair,” said Martinez, who was 18 at the time of the altercation. “We were willing to cooperate right away. It is wrong to say we wouldn’t cooperate. We were telling the truth.”

Four days after the physical altercation, on August 27, Boczar’s father met a King County Sheriff's Office detective and provided copies of videos of the fight, according to e-mails the parent shared with KING 5. The dad informed the detective that his son and Martinez wanted to press charges against the Eastside Catholic and Eastlake High School athletes. But, e-mails show, police didn't follow up with the family or interview the alleged victims who sought to press charges until two months later. The father e-mailed police officers about the case 18 times between August 27 and October 13 ⁠— the date a deputy finally arranged to meet with the teens to take their statements and launch an investigation, according to two email threads between the father and members of law enforcement.

“I believe them delaying it, it was a poorly done job,” said Martinez, who was 18 at the time of the alleged assault.

The King County Sheriff’s Office did not include information in its police report about the Boczar family reporting the crime and sharing videos of the incident right after it happened.

Sgt. Ryan Abbott, a public information officer for the  King County Sheriff's Office, didn’t explain why detectives who worked on the case failed to document the actual date the parent provided the videos to police and informed deputies of Martinez and Boczar’s intent to press charges. He said that detectives must prioritize their cases, and they completed this investigation with plenty of time to spare before the statute of limitations for felony assault expires.

“Your question seems to assume that because of the number of times the parent e-mailed us, meant no work was being done. Detectives investigate multiple cases at the same time and receive many e-mails. We could have done much better in communicating with this parent,” Abbott said.

Casey McNerthey, a King County Prosecutor's Office spokesman, declined an interview request to discuss the decision to decline filing charges in the case. He said in each of the two cases police referred to their office, multiple factors that led to the declines.

In a statement, he applauded the King County Sheriff's Office’s for its work on the criminal investigation.

“We commend Sammamish Police on their thorough and fair investigation,” McNerthney said. ”This was not a question of their work, rather the totality of evidence that would be presented in court.”

‘He Was Coming At Me In A Very Aggressive Way’

When Boczar and Martinez finally met with police in October 2019, the two alleged victims again shared the videos of the brawl, and they told a deputy that three Eastside Catholic football players and another football player from Eastlake High School physically attacked them and a third teenager in the parking lot of a Sammamish Safeway. Fifty to 75 juveniles clustered around the brawl and a handful of concerned bystanders called 911, according to police records and 911 audio recordings.

The teens said a star Eastlake High School player initiated the fight because the player was upset they’d disrespected someone in his family.

“He was coming at me in a very aggressive way,” said Boczar, adding that he decided to speak out about that night because he doesn’t want the students who fought him to get a pass because of their status as star athletes. “It was scary because all of a sudden you look up and it’s like you just see people punching you, kicking you.”

Credit: Provided
This is a screenshot from a video that captured a portion of a violent 2019 parking lot fight involving members of Eastside Catholic's football team.

An attorney for one of the football players investigated in the case said her client wasn’t an aggressor in the fight; he was trying to de-escalate it by pulling one of the alleged victims back.

The attorney said police also failed to interview enough witnesses. She said there were plenty of students in the crowd who would have confirmed to police that Boczar, Martinez and the third alleged victim all came to the Safeway parking lot looking for a fight. On August 24, 2019, a day after the altercation, Martinez posted a message on Instagram indicating he was ready to fight again.

“I’m coming for all of you, it's over,” wrote Martinez in a social media post that did not mention who was the message was meant for. The teen admitted he posted a few inappropriate messages “out of anger,” over what happened in the Safeway parking lot, but he still maintained he and his friends are victims of an assault— not the ones who initiated the fight.

Sgt. Abbott, the King County Sheriff's Office public information officer, said only one witness stayed to talk to police officers on the night of the fight. The other people in the crowd fled the scene and made no attempts to contact police, he said.

Abbott explained that the detective who worked on the case made attempts to interview everyone who was a suspect in the criminal investigation. He said one suspect, who was summoned to the police station by a detective, came with his attorney and declined to provide a statement. Another suspect’s mother “refused” to let detectives speak with her son, Abbot said. He said the detective spoke with the third suspect’s father and learned he was unavailable. The fourth suspect's mother did not respond when a detective attempted to make contact, Abbott said.

“The detective also went to the school to make contact with the juveniles, but the school told her they didn’t want to talk at school and would rather talk at a different location but we had difficulty making that happen,” Abbott said.

An Eastside Catholic spokeswoman said Tuesday that school administrators didn't know three of their students were suspects in the criminal assault investigation until reporters brought it to their attention this week. A Lake Washington School District spokeswoman said their district was also unaware of the fight or their student's involvement.

This is at least the second time in two years that members of the Eastside Catholic's elite football team were suspects in a criminal investigation for allegations of serious crimes. The private school has faced criticism in the past for failing to hold football players accountable for breaking school rules.  Eastside Catholic never opened an internal investigation when four of its football stars were accused in 2018 of sexually assaulting a 16-year-old girl in the bed of a moving pickup truck on public roads.

On May 5, after reporters informed Eastside Catholic leaders that other members of the school’s elite football team were suspects in the 2019 assault investigation, the school’s president announced that it had immediately retained a consulting agency to assist in “independently and objectively evaluating” the school’s processes, “identifying gaps and implementing changes.”

“We are absolutely committed to ensuring that the culture of every department, every program, every student and every faculty and staff member is aligned with our values,” wrote Eastside Catholic President Gil Piccioto in a letter to students, obtained by KING 5. “As a faith-based institution, our community must live our values in words, deeds and spirit and you have my solemn commitment to make it so.”