After the fatal restraint of a foster child in Michigan was caught on security cameras, Washington child welfare advocates urge Gov. Inslee to take action. 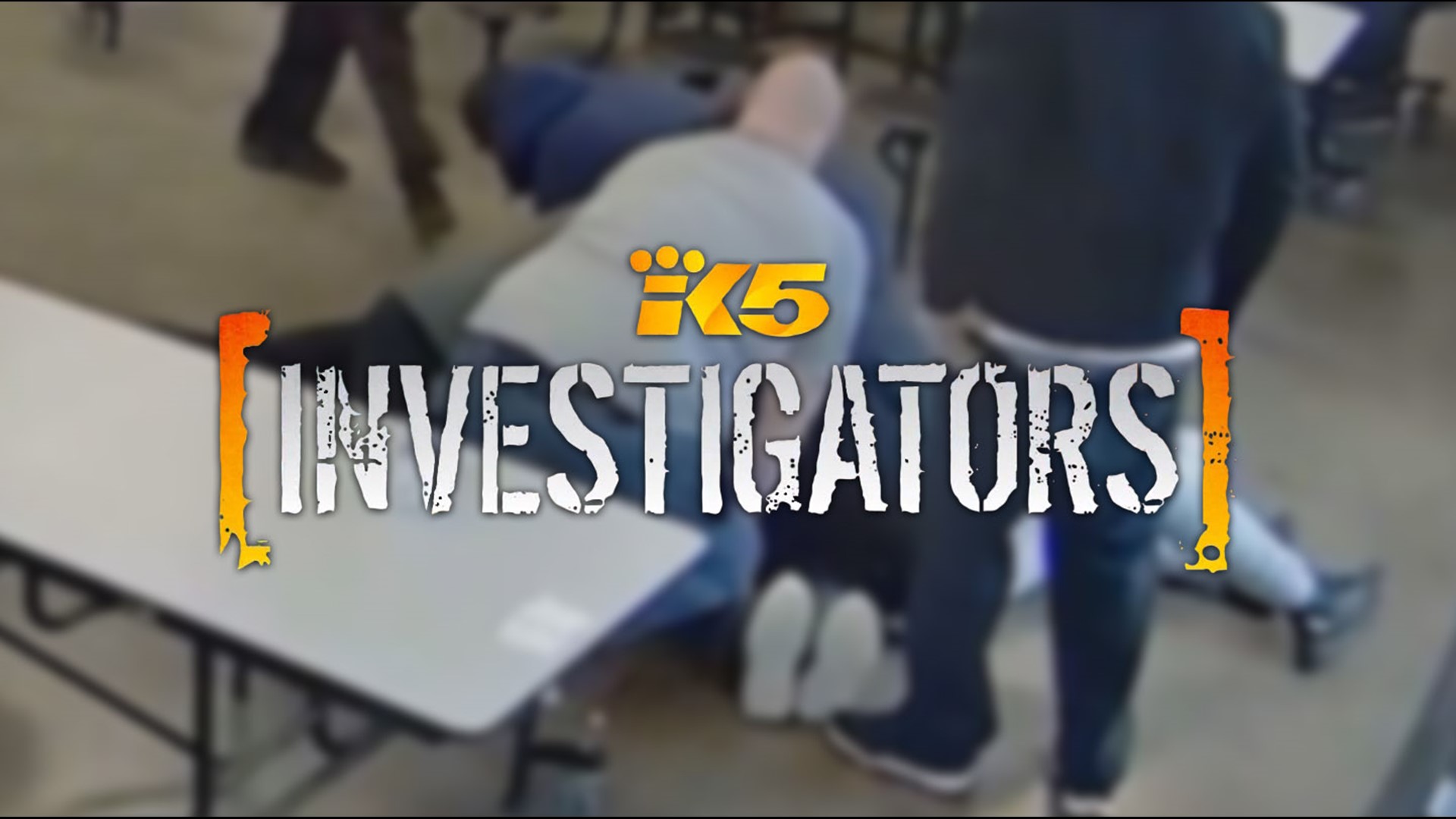 The alarming death of a Michigan child at a foster facility in Kalamazoo in May has prompted more than a dozen child welfare agencies in Washington to pressure Gov. Inslee to terminate all contracts with the company that owns and operates the institution.

Sequel Youth and Family Services, based in Alabama, operated the now-closed Lakeside Academy in Michigan and 28 other centers for troubled youth in 13 states.

The state agency charged with child welfare programs in Washington, the Department of Children, Youth and Family Services (DCYF), had placed Washington foster children in Lakeside Academy and many other Sequel facilities since 2015, according to state records obtained by KING 5.

DCYF has sent more than 160 hard-to-place foster children to live in institutions out-of-state in the last five years. Many of them were sent to 13 different Sequel centers in states including Arizona, New Jersey, Illinois and Iowa.

In a letter to the governor sent last month, the advocacy group Disability Rights Washington (DRW) urged the termination of the state’s relationship with Sequel. A total of 18 groups dedicated to the welfare of children signed onto the letter.

“Sequel is a private-equity backed, for-profit company whose staff have been reported to physically, sexually and emotionally abuse children in its facilities across the country,” wrote DRW attorneys. “Rather than providing for in-state services that will help them and their families heal, Washington has continued to ship children with the greatest needs to Sequel institutions, despite this company’s appalling track record.”

When KING 5 first reported on the state sending children to a troubled Sequel facility in Iowa in 2018, DCYF officials said using out-of-state services was necessary as there weren’t enough placement options in Washington.

Since that time, DCYF has made good on its promise to bring many of the children home. As of this month, 14 children remained in facilities outside of Washington, eight of them at Sequel centers.

“Disability Rights Washington (DRW) recently raised concerns about placements with a specific multi-facility provider. DCYF agreed to review individual placements in those facilities and is doing so,” wrote DCYF Director of Communications Debra Johnson in a statement.

Advocates and former foster children said placing even one child out of state is one child too many; especially at a location run by Sequel.

“We just simply don’t have any faith or trust in Sequel anymore,” said DRW attorney Susan Kas. “We don’t want any more tragedies to happen before the state says: ‘no more.’”

Death of foster child in Michigan in May

The incident that led to the death of Michigan foster child Cornelius Frederick was captured on two separate security cameras inside the school.

Cornelius, age 16, is seen throwing some of his lunch at fellow foster children inside the lunchroom. When he doesn’t stop, staff members pounce on him and restrain him on the ground. Three staff members increase to six men restraining Cornelius for 11 minutes. When they all step away from the child, he lies on the floor motionless, while security video shows no staff member giving aid.

Lakeside Academy’s nurse comes to the scene, and she takes no action either. Twelve minutes after the restraint ends, the nurse takes out her cell phone and calls 911. Four more minutes pass before the nurse and other employees take aggressive life-saving action, including administering CPR.

Frederick remained on life support at a Michigan hospital for two days before, according to the medical examiner, he died of asphyxiation on May 1.  At the time of death, he also tested positive for COVID-19.

Prior to the death of Frederick, the state of Michigan had warned Lakeside Academy of the need to improve their procedures. In January, four months before the fatal restraint incident, the Michigan Department of Health and Human Services issued a Special Investigations Report which found multiple violations, including the improper use of physical restraints.

Some Washington foster children, including Steve Kiourkas of Seattle, were sent to Lakeside Academy.  DCYF sent Kiourkas, now age 20, to the Michigan institution in 2016, at the age of 16. Before the move, he bounced between 46 different foster and group homes in Washington state.

“It was traumatic for me to watch (the video of Cornelius) and it was heartbreaking,” said Kiourkas. “(Lakeside Academy) uses restraints in a way that is extremely traumatic for kids. It’s abusive…I’ve personally had a staff spit in my face directly to try to agitate me to give them an excuse to restrain me.”

Several investigations by advocacy groups and state regulators have been conducted into Sequel facilities across the country. They show a pattern of abusive practices and unacceptable conditions.

A 2012 report by Disability Rights New Mexico found staff at Bernalillo Academy in Albuquerque used restraints for relatively minor issues. One child with autism was found to have been restrained 49 times in one month.

“Bernalillo Academy staff do not correctly distinguish between emergency situations that genuinely require restraint use and those situations that may be de-escalated using… other interventions,” wrote the investigation's authors.

Disability Rights Ohio conducted a nine-month investigation into Sequel Pomegranate treatment facility in Columbus. They found “pervasive and disturbing problems” that were embedded into the culture of the operation.

“(We uncovered) problematic staff behavior, including little staff intervention during peer bullying and fighting and instances of probably staff encouragement and direction,” wrote the authors this year.

Investigators also found “unapproved and painful restraint techniques and physical abuse (including chokeholds and punches) that often resulted in injuries.”

In 2018, Disability Rights Washington found egregious conditions and practices at Clarinda Academy, a Sequel facility in Iowa where Washington foster children had been sent to live.

“Washington’s use of out-of-state facilities is creating an unacceptably heightened risk of abuse and neglect and further harm to youth who have already suffered from multiple, prolonged or chronic traumatic events,” wrote DRW investigators. “Washington’s social workers have received information regarding allegations of inappropriate physical restraint practices at Clarinda Academy, but did not act to ensure the safety of the young people they have placed there.”

After the 2018 report, DCYF discontinued contracts with Clarinda, but continued with other Sequel properties.

“DCYF took immediate action to assess youth safety and deployed teams of executive and social work staff to visit every Washington youth placed in any out-of-state facility”, wrote Johnson, the DCYF communications director. “As a result of the review, DCYF Secretary Ross Hunter set a goal in August of 2018 to “bring them all home” within 18 months. The agency would in most cases prefer to have children placed in-state. An out-of-state placement can be appropriate if the most appropriate service for the youth is not available in-state.”

Former Lakeside Academy foster child Steve Kiourkas said he couldn’t get the attention of point people in Washington state. He said he complained and asked for help frequently from his Washington state social worker, to no avail.

“I was sent to Lakeside and basically handed over to the state of Michigan. I had no connection, no relationship with anybody,” Kiourkas said. “I wanted my social worker to maintain contact with me and possibly come visit the facility that she sent me to. But instead, she failed to even really contact me while I was there. (I felt it was to) lighten up her caseload to get me out of the state in a way, that’s how I felt.”

A review of financial records by the KING 5 investigators shows shipping foster kids out of state is expensive business. Between 2015 and 2018, taxpayers paid more than $40 million to foot the out-of-state bills, records show.

“We see in this case when we’re using tax dollars to pay a for-profit company (and) that company is getting chance after chance. And we just think there is something wrong with that,” Susan Kas of DRW said.

The state’s Department of Children, Youth and Family Services says it’s reviewing the remaining children’s cases and will make a decision on how to proceed in the next weeks.

“DCYF will change foster children’s placements if the facilities they are placed in don’t meet agency standards and will take broader action if the review identifies systemic concerns,” Johnson said. “To get to zero (out-of-state placements) Washington will need more capacity to care for young people with very challenging behavior.”

The state of Michigan closed the school where Cornelius Frederick died. Three of the staff members, including the nurse, have been charged with manslaughter and child abuse.

A spokesperson for Sequel Youth and Family Services said they had no comment at this time.

Kiourkas, now an adult, is currently still residing in Michigan. He said getting the money together to return to Washington is difficult. He said he's been diagnosed with PTSD connected to his time at Lakeside Academy, but that he's "doing well" and working at a restaurant. He dreams of returning to Seattle to be near friends, family, and to go to college.

"My heart resides in Washington and the city of Seattle."