Federal investigators arrived in Alaska Tuesday to determine what caused a mid-air collision between two sightseeing planes near Ketchikan on Monday. 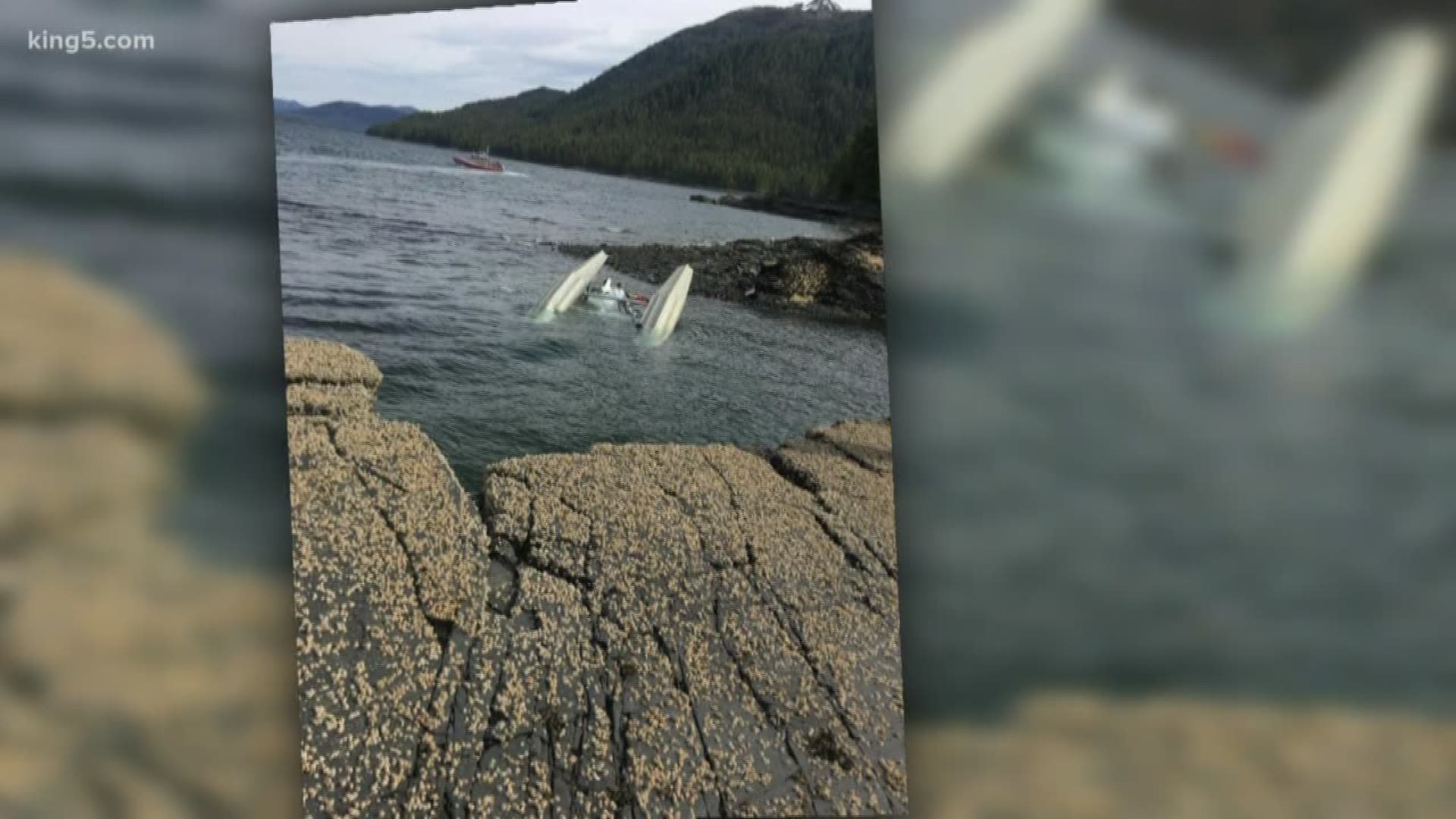 ANCHORAGE, Alaska — Six people died and 10 others were hurt after two float planes collided near Ketchikan, Alaska on Monday afternoon.

The cause of the crash remains unclear. Initial reports from investigators indicate decent weather.

Five people were about the smaller aircraft, a de Havilland DHC-2 Beaver. The Coast Guard confirmed all four passengers and the pilot have died.

There were 11 people aboard the larger float plane, a de Havilland DHC-3 Otter operated by Taquan Air. The pilot and 9 passengers survived. A 10th passenger was found deceased, reports a company spokesperson.

RELATED: What we know about the Alaska floatplane crash victims

Investigators with the National Transportation Safety Board arrived at the crash scene on Tuesday. A preliminary report indicates the larger sightseeing plane descended onto the smaller float plane. NTSB officials said there were no flight recording devices aboard either aircraft.

The 10 injured survivors are American. Four of the 10 survivors, all in their 60s, were transported to Harborview Medical Center in Seattle.

All of the float plane passengers were cruise ship guests on The Royal Princess, operated by Princess Cruises.

The Royal Princess, which can carry up to 3,600 people, was among four city-sized cruise ships in the tiny Alaskan community on Monday.

During port stops, visitors can shop in tourist stores or take part in several excursions, such as visiting an Alaska Native village, tour the backcountry, or visit a raptor center.

Another popular trip is flight-seeing in Misty Fjords National Monument. Visitors marvel at the lakes, snowcapped peaks and glacier valleys in the wilderness area. Trips cost about $260 each.

The larger aircraft carrying 10 passengers and a pilot was sponsored by the cruise line.

It was returning from Misty Fjord when it collided with the smaller sightseeing plane, carrying four passengers from the same cruise ship and a pilot.

The smaller plane, which operated independently and not as an official excursion flight booked through the cruise ship, was owned by Mountain Air Service of Ketchikan, which didn't immediately return a call Tuesday.

The crash happened in relatively good weather, high overcast skies with light southeast winds. The crash occurred about eight miles from Ketchikan, near George Inlet. The planes came down about a mile and a half apart with some of the debris field on land. Their altitude wasn't immediately known.

The smaller plane, a de Havilland DHC-2 Beaver, was partially submerged in the shore of George Inlet after the single-engine plane overturned and hit some trees before crashing, according to Coast Guard Lt. Brian Dykens. The larger Otter landed in water and sank, he said.

The Beaver appears to have broken apart in midair, according to Jerry Kiffer, duty incident commander of the Ketchikan Volunteer Rescue Squad. He said the plane's tail and section of the fuselage were 900 feet from the aircraft's floats, which landed near shore.

After the crash, the 10 injured passengers were initially taken to a hospital in Ketchikan. Four patients were later transferred to Harborview Medical Center in Seattle, suffering various broken bones, spokeswoman Susan Gregg said. Three of the patients – a 63-year-old woman, a 61-year-old woman, and a 61-year-old man – are in satisfactory condition. A fourth patient, a 67-year-old man is in serious condition in intensive care, but showing signs of improvement.

Last summer, all 11 on board another Taquan Air flight survived when the 72-year-old pilot confused snow on a mountain with a body of water and crashed on a rocky mountainside on Prince of Wales Island near the southern tip of the Alaska Peninsula.

A pilot and eight cruise ship passengers died June 25, 2015, when a de Havilland DHC-3 Otter operated by Promech Air Inc. crashed into mountainous terrain about 24 miles from Ketchikan, also as it was returning from Misty Fjords.

The NTSB later determined that pilot error, the company's culture and lack of a formal safety program were among the causes of that crash. Taquan Air purchased the assets of Promech a year after the crash, and currently employs three pilots who worked for Promech, a company spokeswoman said.

"We are extending our full support to the investigating authorities as well as the traveling companions of the guests involved," Royal Princess said in a statement.

The Royal Princess left Vancouver, British Columbia, on May 11 and was scheduled to arrive in Anchorage on Saturday.

"There are no words other than we are heartbroken over this loss," Taquan Air said in a statement Tuesday. "We are focused now on extending our full support to our passengers and their families, along with first responders and other agencies involved. All Taquan scheduled flights remain suspended and we are continuing to cooperate fully with the National Transportation Safety Board, the Federal Aviation Administration and other authorities to examine every aspect of this incident."