5 Washington islands to visit this summer

Here are five Washington islands that make a great destination for a getaway. 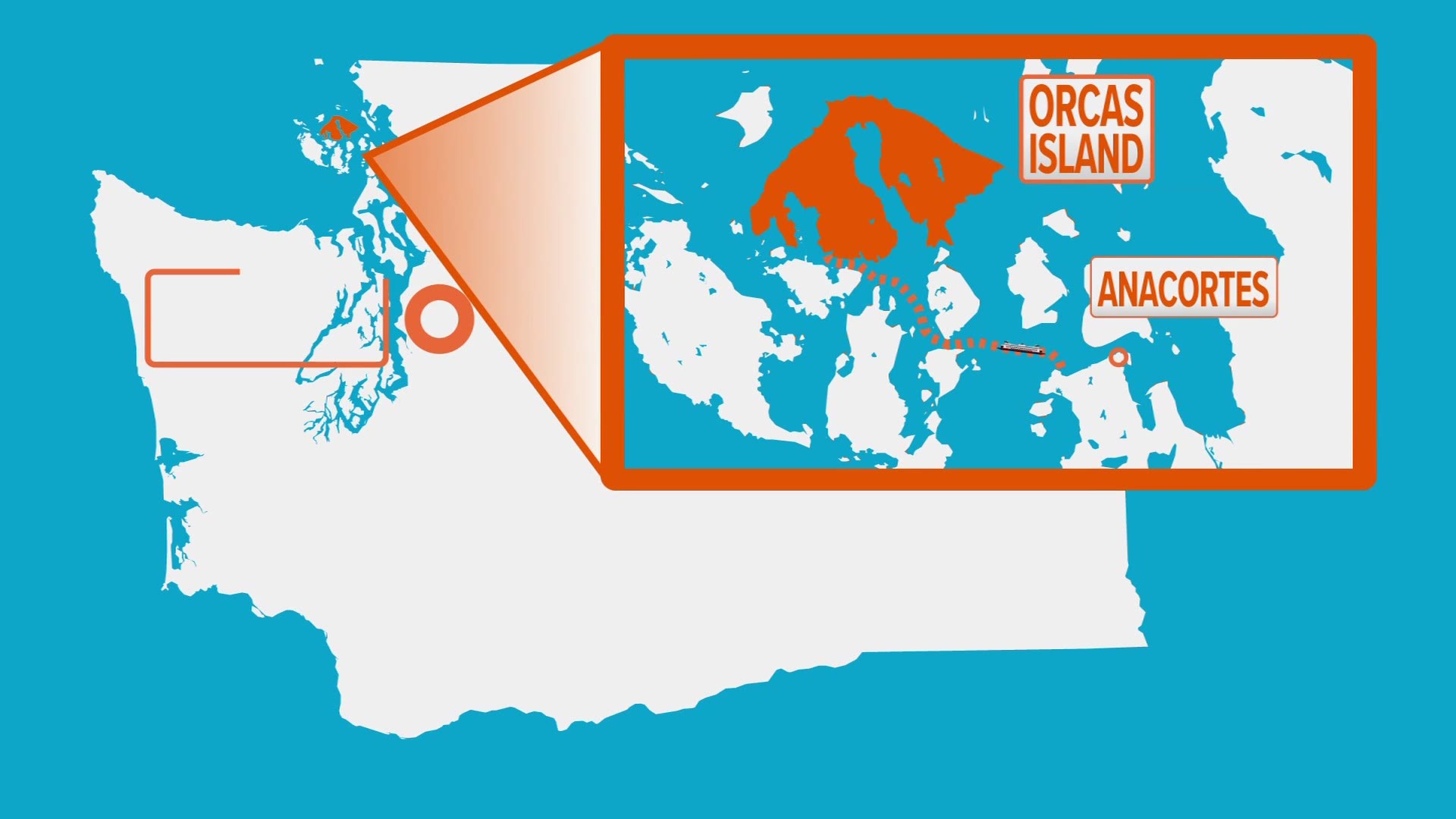 Where it is: Orcas is one of four main islands in the San Juans. It’s the furthest north of San Juan, Shaw, and Lopez islands.

How to get there: Washington State Ferry routes run from Anacortes to the terminal in Orcas. Reservations are recommended, especially in summer. It’s about an hour-long ferry ride.

What to do: Summit Mount Constitution, hike in Moran State Park, check out shops and restaurants in Eastsound. 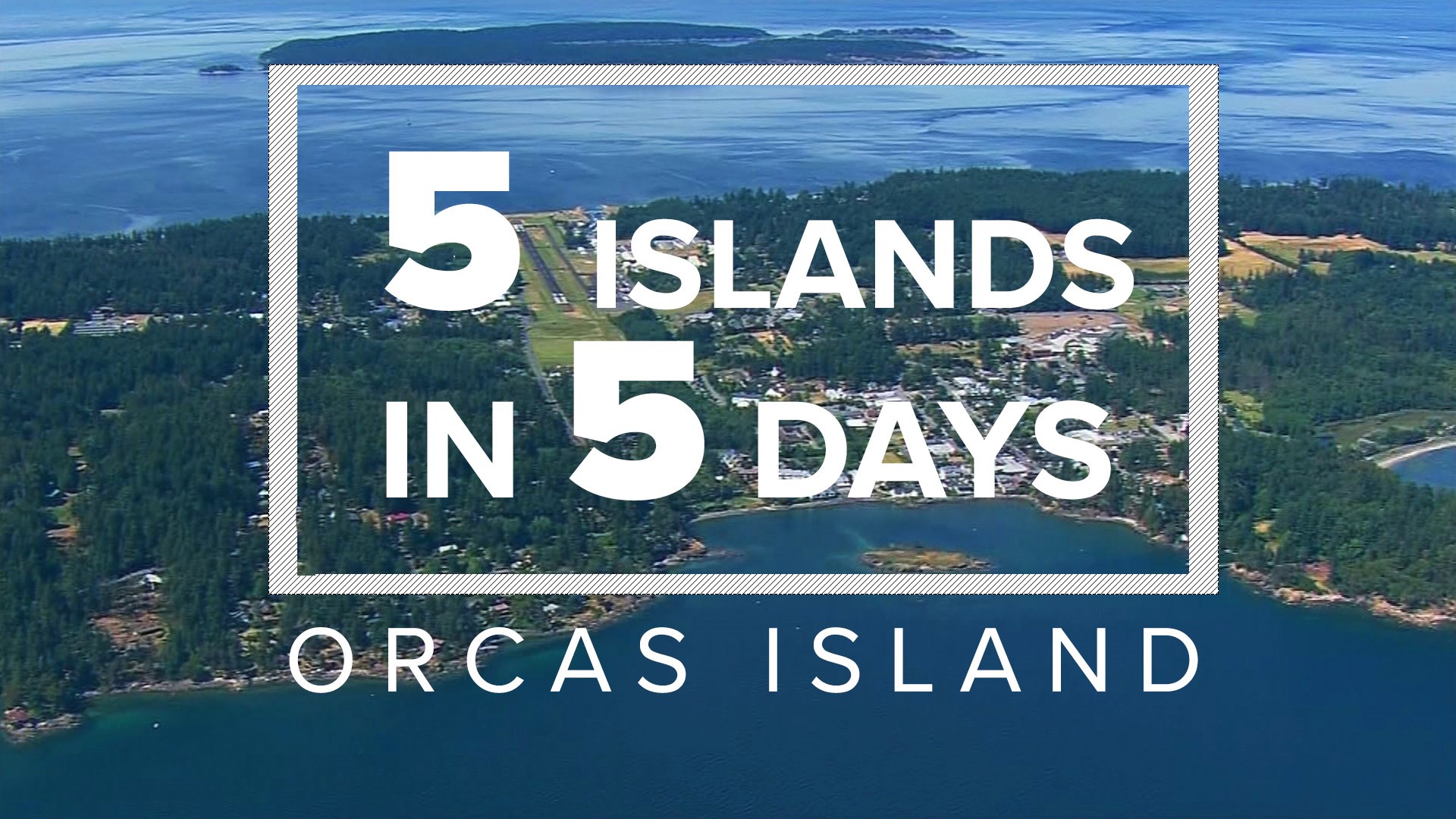 Orcas Island is the largest of the San Juan Islands in the northwest corner of Washington state. To get to Orcas Island, you'll need to catch a ferry in Anacortes, which is about 90 miles from Seattle.

One of the most popular spots on Orcas Island is Buck Bay Shellfish Farm in the town of Olga. You'll find some of the freshest seafood including oysters, Dungeness crab and locally caught fish. Mark Saywer and Toni Knudson own the family farm, which was established by Sawyer's grandparents in the early 1940's.

With a view of Buck Bay, you can enjoy house-made ceviche, sauces, smoked salmon, and fresh salads. Have a picnic at one of the outdoor tables or grab some food to go. And if you need a lesson on how to shuck an oyster, just ask Knudson. She calls herself an expert shucker and taught us how to properly shuck an oyster without injuring ourselves.

If you're looking for a cup of coffee, a pastry, or a stop for lunch, head to Brown Bear Baking at Main Street and North Beach Road in Eastsound. On a summer day, you'll usually see a line out the door that spills into the beautiful courtyard in front of the bakery. David Ellertsen and Lee Horswill bought the bakery in 2013 and moved to Orcas Island to fulfill their dream of living a slower and quieter life.

"That's really baking is about. It's community and sharing," said Horswill.

You can check out the bakers hard at work thanks to their open kitchen.

"You also get a chance to hear people talking about what they're having," said Ellertsen. "You get a chance in the kitchen to hear, 'That's the best croissant I've ever had!'"

Where it is: An incredibly long island, Whidbey’s southern tip is east of Mukilteo, and its northern tip stretches east of La Conner.

How to get there: Take a 20-minute Washington State Ferries ride from Mukilteo to Clinton. Alternatively, you could drive over Fidalgo Island and Deception Pass to get to the island from the north end.

What to do: Stroll through quaint downtown Langley, tour a local farm like Eckholm Farm outside Coupeville, and drive the whole island tip to tip to see diverse landscape. 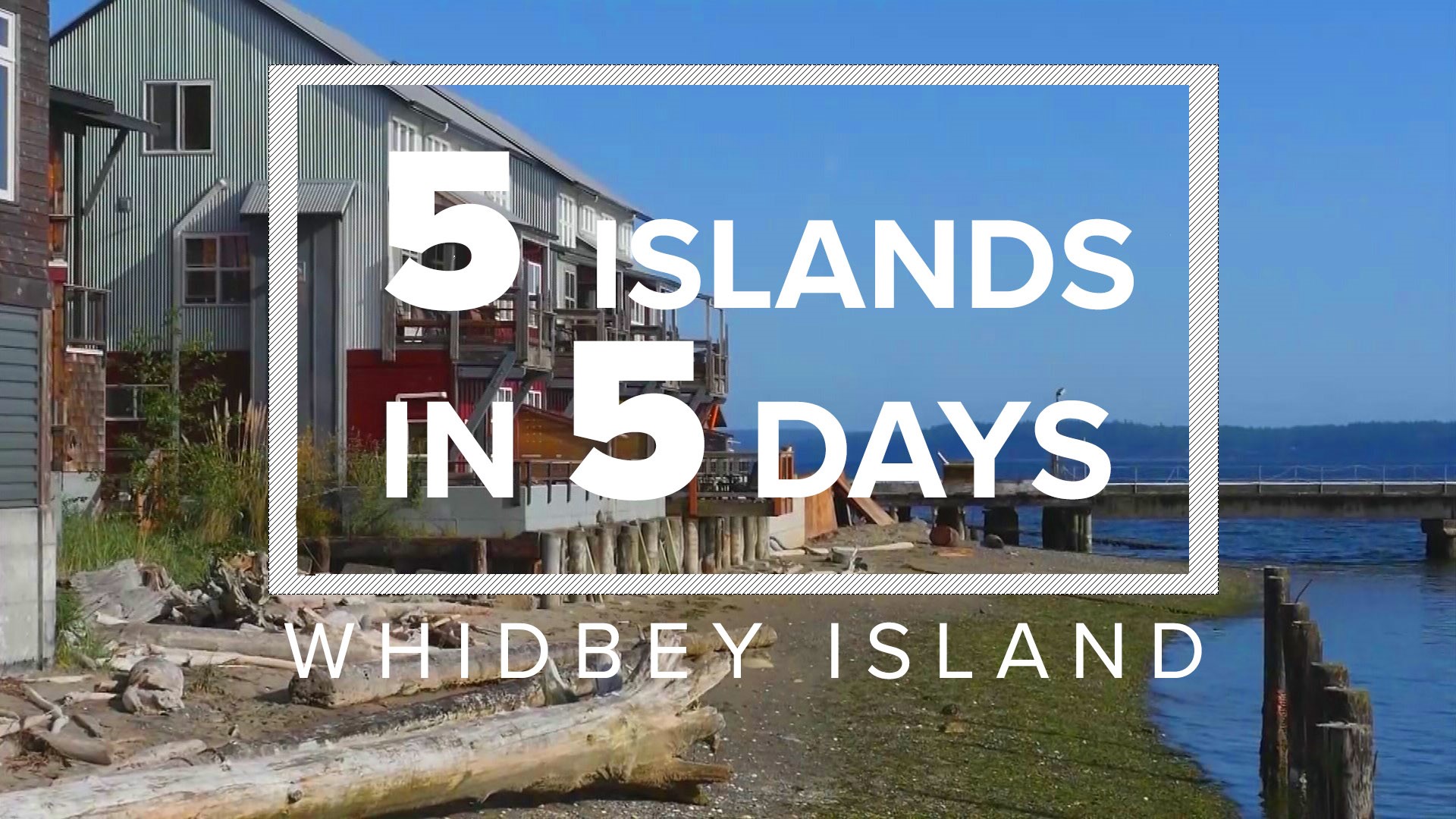 Whidbey Island is about 30 miles north of Seattle, and you can either catch a ferry from Mukilteo to Clinton or drive onto the island if you come across Deception Pass on the north end.

Not too far from the Clinton ferry terminal is the town of Langley, where you'll find The Star Store. The general store has been a part of Langley since 1919. But Gene and Tamar Felton bought the store in 1984, and today it's a full service market with all organic produce, deli, mercantile with apparel and goods, and a wine and beer room.

"We have one employee who's been here 34 years. We have a number employees who have been here over 25 years, and a lot of those people started out with their first job right here," said Felton.

About 25 miles north of Langley is Coupeville, where you'll find Eckholm Farm. It's a historic farm within Ebey's Landing National Historical Reserve. Bruce and Linda Eckholm recently restored the original farmstead cabin from 1910. They raise chickens, pigs and highland cattle. They also maintain 40 colonies of bees and produce local honey.

"We do about a ton, ton and a half of honey," said Eckholm.

The Eckholms take samples from the hives and send them off for pollen analysis to provide an estimate of floral composition. So you know the floral origins of they honey you're consuming.

RELATED: Small town on Whidbey Island is becoming kissing capital of the Northwest

Where it is: Anderson Island is nestled in the South Sound between Steilacoom, McNeil Island, and Beachcrest.

How to get there: The ferry to Anderson Island, which is operated by Pierce County Ferry, leaves from Steilacoom and takes 20 minutes.

What to do: Visit the historic Johnson farm, take a beach walk, and birdwatch for loons, herons, or eagles. 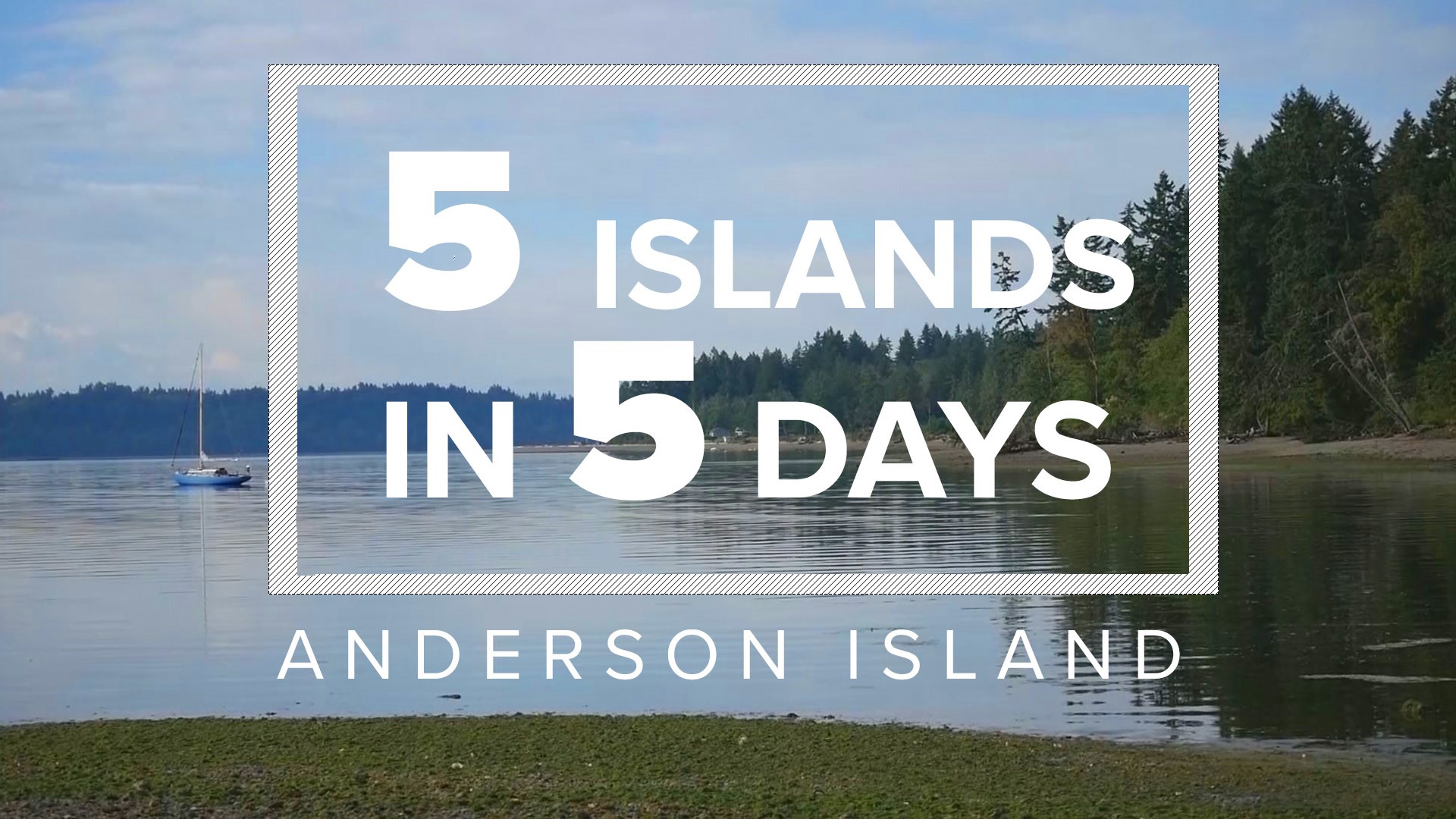 Anderson Island is a small, quaint island in Pierce County. It’s a short 20-minute ferry ride away from Steilacoom. The eight-mile long island has no stoplights, one general store, one café and coffee shop, and one restaurant.

In the summer, the population of the island increases from 1,100 people to 4,000. The island is known for its outdoor activities including hiking, fishing, kayaking, swimming, and golfing.

We checked out the Riviera Golf Course, a nine-hole, par 29 course.

“This golf course was built in the late '60s. We have 3,100 lots. Every lot owner is a member of Riviera,” said general manager Gary Henson. “We’ve been told we are the ‘Little Augusta.’"

Across the street from the golf course is Lakeshore Restaurant, the only restaurant on Anderson Island. The restaurant overlooking Lake Josephine just went through an extensive renovation.

Anderson Island is also home to 18 parks. At Jacobs Point Park, you can get to the beach by taking a 2.5-mile round trip hike through the woods and wetlands.

If you want to swim, head to Lowell Johnson Park’s Ol’ Swimming Hole and enjoy the clear blue water of Lake Florence. There’s a floating pontoon for high flips, jumps, and slides.

RELATED: Just a Ferry Away: Anderson Island is an escape from city life

Where it is: Camano Island is located in the crook of Whidbey Island just east of Stanwood.

How to get there: Drive east on State Route 532 from Stanwood to get on Camano Island from the north end.

What to do: Take in the views at Cama Beach or Camano Island state parks, sink your toes in the sand at Iverson Spit, and eat local at the Camano Commons Farmers Market. 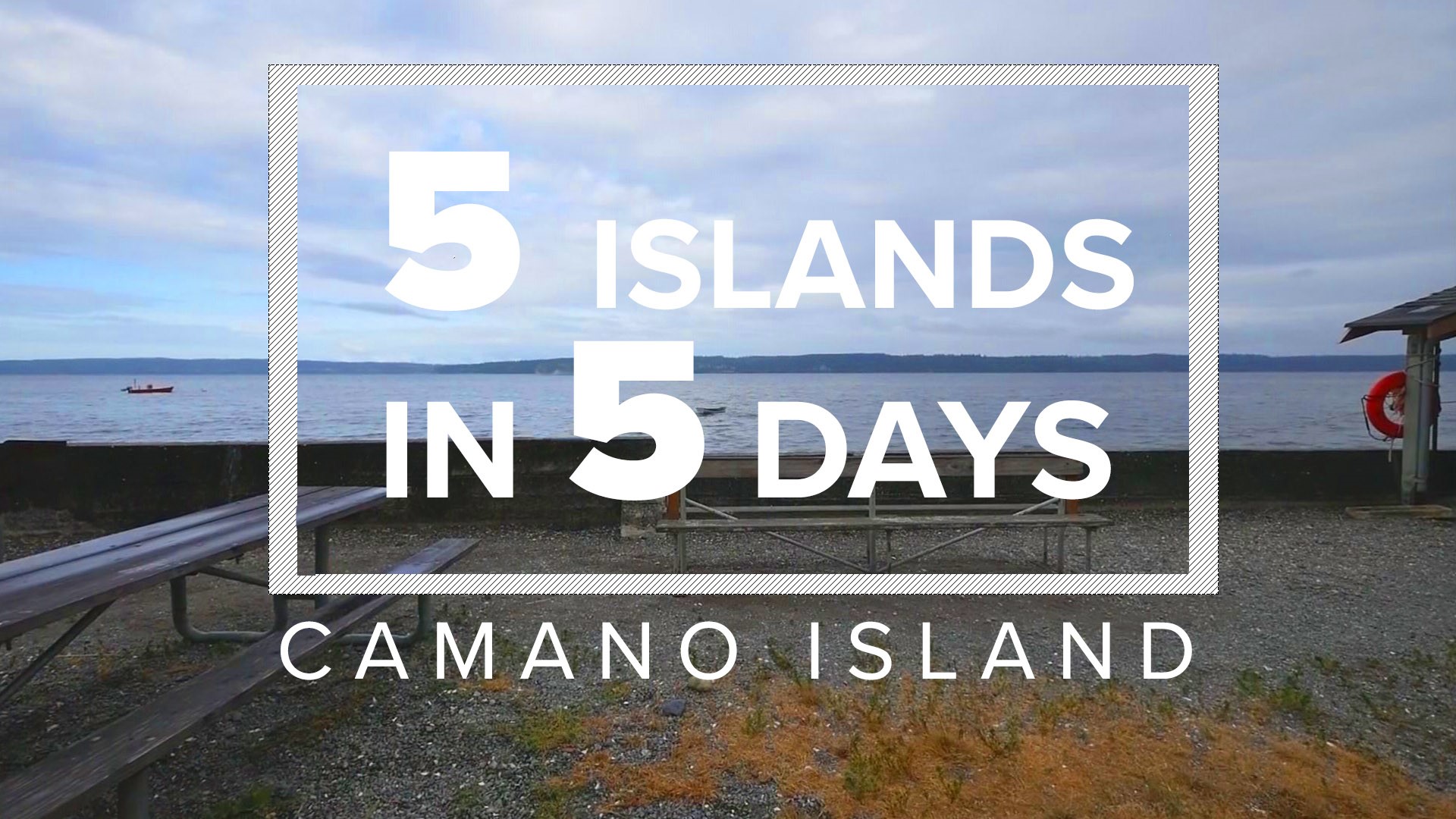 For a unique and rustic way to spend the night on Camano, stay in waterfront cabins at Cama Beach State Park. It used to be a family fishing resort in the 1930s, and staying in the original cabins allows you to take a step back in time. The cabins are right on the beach facing Saratoga Passage.

You can make breakfast on the grills outside or walk up the hill to Cama Beach Café, where you can enjoy freshly baked goods, coffee, omelets, and what they claim is the best Reuben sandwich you’ll ever eat.  All the food is locally sourced from Camano Island.

If you’re looking for a little adventure, try ziplining at Canopy Tours NW. There are six ziplines through the forest. The certified guides will help you do all the work, so don’t worry if you’re a novice. Canopy Tours NW is part of Kristoferson Farm, which has been run by the same family for six generations dating back to 1912.

There are also two wineries on Camano Island. We checked out the award-winning wine at Dusty Cellars Winery. It's a small winery that has become a gathering spot for locals and tourists. Ryan and Dusty Kramer started the winery in 2006, and they open the tasting room the first weekend of the month with live music in the summer.

Where it is: South of downtown Seattle and north of Tacoma, Vashon is accessible from several areas across Puget Sound.

How to get there: Washington State Ferries operates three routes to Vashon: one from Fauntleroy in West Seattle to the north end of the island, one from Southworth in Kitsap County to the same terminal, and one from Point Defiance in Tacoma to Tahlequah on the south side of the island. Those routes take 20 minutes, 10 minutes, and 15 minutes, respectively.

What to do: Check out the iconic “bicycle in a tree,” visit the historic lighthouse, and taste wine or beer at one of the island’s wineries or breweries. 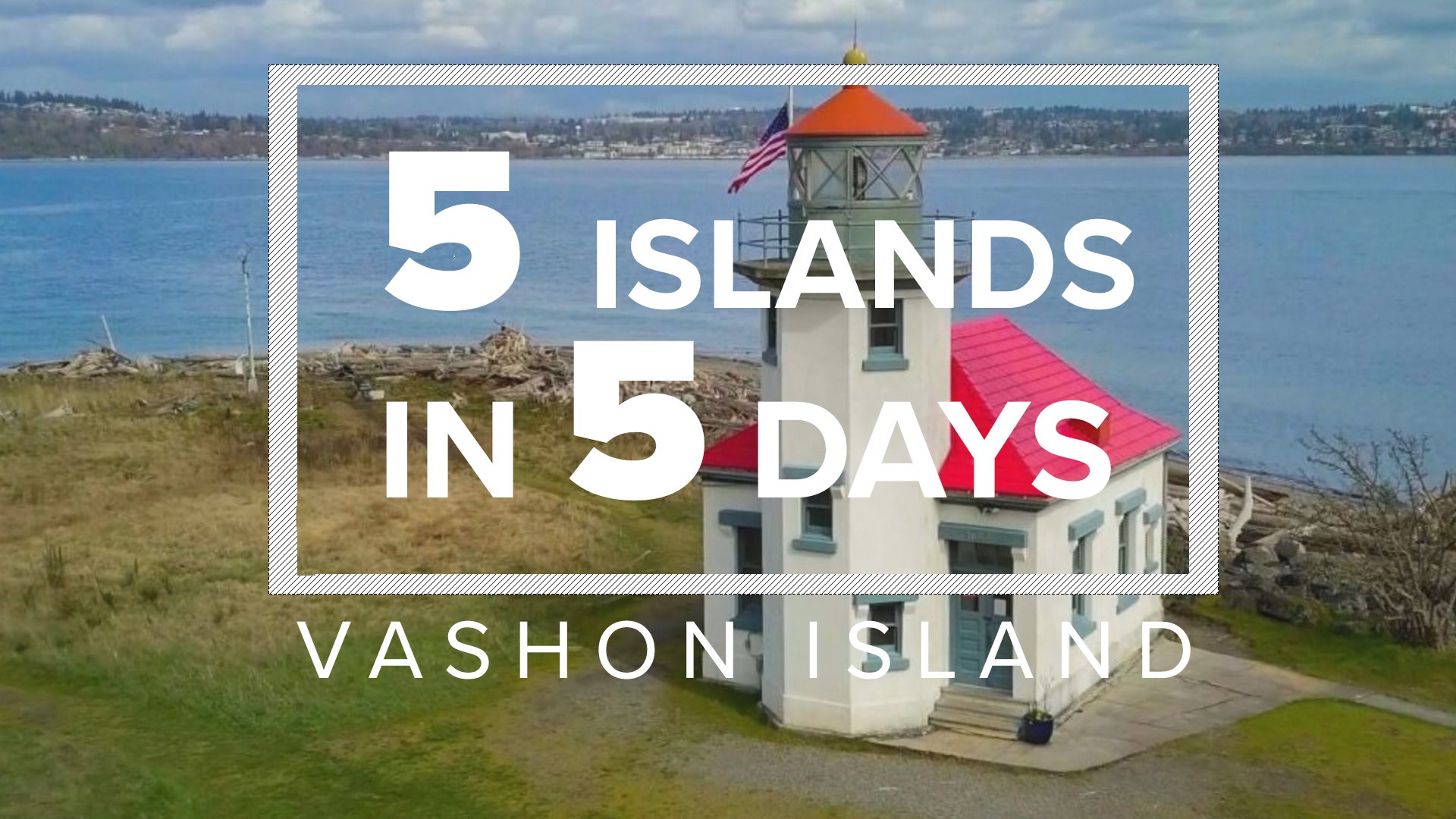 One of the best ways to see Vashon Island is to get out of your car and onto an e-bike. You can rent electric bikes from Vashon E-bike and cruise the island. Doug and Erin Kieper started Vashon Adventures offering kayak, paddle board, and now e-bike rentals. They offer hourly rentals or tours of the island. They also offer a shuttle to pick you up from the ferry terminal and take you to their shop.

If you're looking to quench your thirst, Dragon's Head Cider is one of two cideries on Vashon. Laura Cherry and her husband moved to Vashon with a dream of planting an orchard and starting a cidery. Their ciders are a blend of more than 20 traditional English and French cider apple varieties from their orchard. Their tasting room is family friendly, so bring the kids along and enjoy a picnic in their orchard.

Vashon has become a bit of a dining destination, and there are several new restaurants that have popped up on the island.

The Ruby Brink just opened this month. It's a bar, butcher shop, and restaurant that serves meat and noodles. Expect the menu to change to feature seasonal items.

Mike McConnell who is behind Cafe Vita and Via Tribunali in Seattle just opened his latest restaurant this month. O Sole Mio Pizza is a New York-style pizzeria serving up slices and full pies.

And The Wild Mermaid opened recently as the only waterfront restaurant on Vashon Island. The restaurant, created by the owners of Snapdragon Bakery and Cafe, serves Mediterranean food and also has a bar and bakery.

There are a number of vacation rental homes on the island, but the only hotel is The Lodges on Vashon. There are 16 individual lodges with a contemporary design and upscale touches, like a deep soaking tub or a large oversized shower with heated floors.

RELATED: Get an inside look at Ted Watson's own Vashon Island getaway

RELATED: Have a staycation on Vashon Island