Overnight crews mopped up hot spots in the southwest area of the fire and patrolled around two houses on the southern edge of the fire. 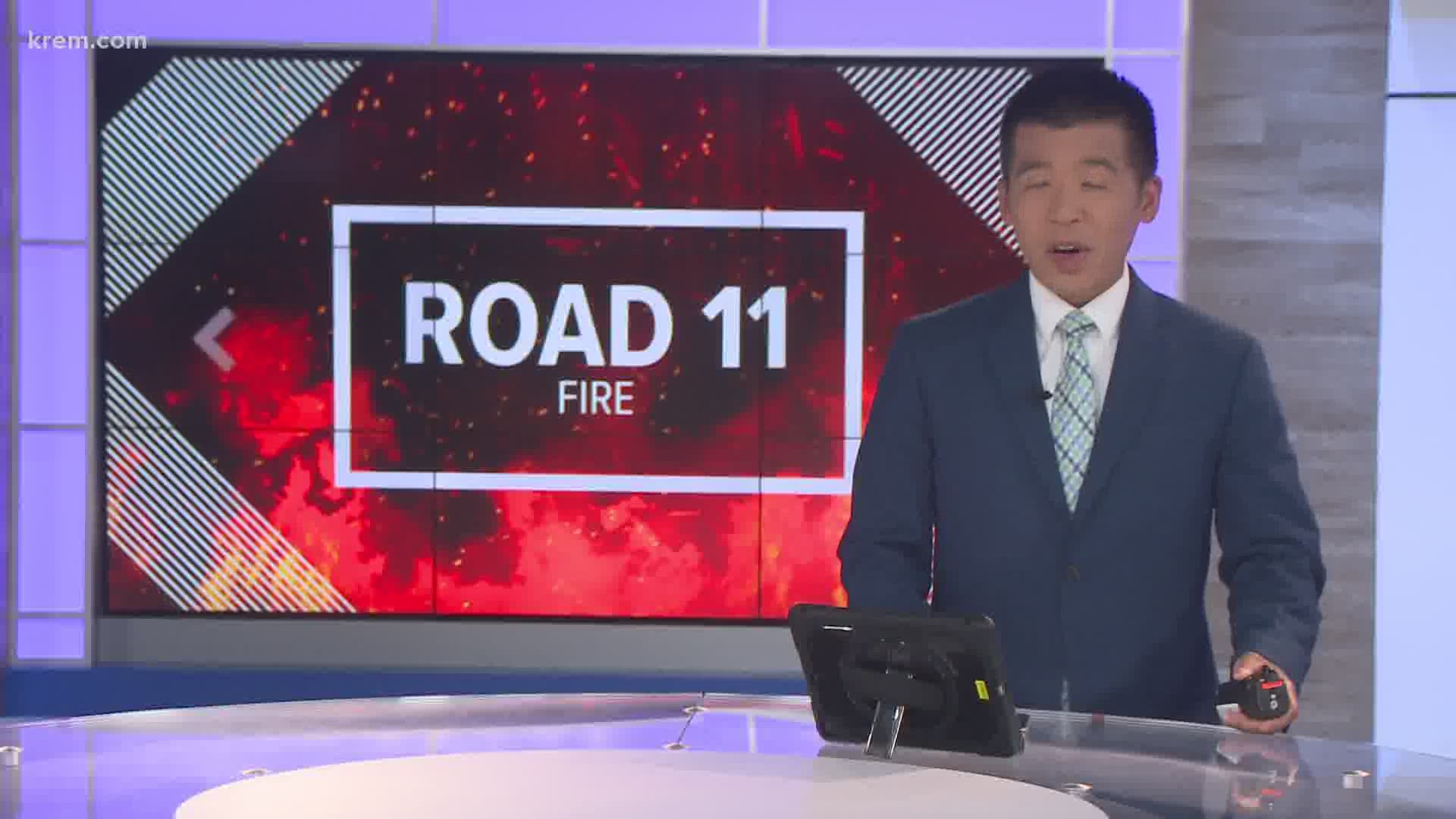 DOUGLAS COUNTY, Wash. — The progression of a nearly 10,000 acre wildfire, called the Road 11 Fire, is slowing, according to the Southeast Washington Interagency Incident Management (SWIIM) team.

The fire started around 12:50 p.m. on Saturday, July 11. It was burning west of State Route 172, near Road 11 moving northward. Fire crews said a change in wind direction pushed the fire east toward Mansfield, Washington. As of Tuesday, it has burned 9,633 acres and is 75% contained. It is expected to be fully contained by Wednesday, July 15.

Overnight crews mopped up hot spots in the southwest area of the fire and patrolled around two houses on the southern edge of the fire.

Crews have been able to keep the fire back and it has not moved closer to Mansfield.

The Southeast Washington Interagency Incident Management team said as of Monday evening, the concern over further movement outside the controlled fire lines has lessened.

An Incident Management team from the SE Washington All-Hazard Interagency, Team 3, was called in on Sunday, July 12, to help support the large number of crews that are on scene or on their way, according to the SWIIM.

According to the Sheriff's Office, the fire started around 12:30 p.m. on July 11. It is currently burning in grass, sage, and wheat crops.

The cause of the fire is still being investigated.

Crews from Spokane Valley Fire Department and Spokane County have been sent in to assist local crews.

DCSO has confirmed that at least 5 structures have been burned down and one residence has had damage.

Additional state resources including fire and law enforcement are on scene. Currently, 10 aircraft's are helping to put the fire out.

Here's what each level of evacuation means according to Chelan County Emergency Management:

People are warned about the current or projected threats from any approaching fire.

Officials said at this time people need to prepare to leave and make arrangements for people with special needs, people who have a mobile home and (under certain circumstances) pets and livestock.

Chelan County Emergency Management said at this level, people must prepare to leave at a moments notice.

These dangerous conditions indicate that there is a good chance that the severity of the approaching fire will make it harder for crews to assist others.

Authorities will keep updating the public as conditions change. Area radio stations have been asked to broadcast periodic updates.

Current conditions are showing immediate threat(s) to the life and safety to the people in the area.

Police will work in this area to provide specific information on the route(s) to take.

If people do not follow the warnings, emergency services or volunteers may not be available to assist due to the dangerous conditions.

Roadblocks and 24-hour patrols will be established in the area. Residents will not be allowed to return until road conditions are safe.

This is a developing story and we will continue to update you when we get more information.