Mount Si and Mount Vernon High Schools are investigating after their football coaches showed unsportsmanlike conduct during a playoff game Friday. A fan was also arrested after pushing someone else in the crowd. 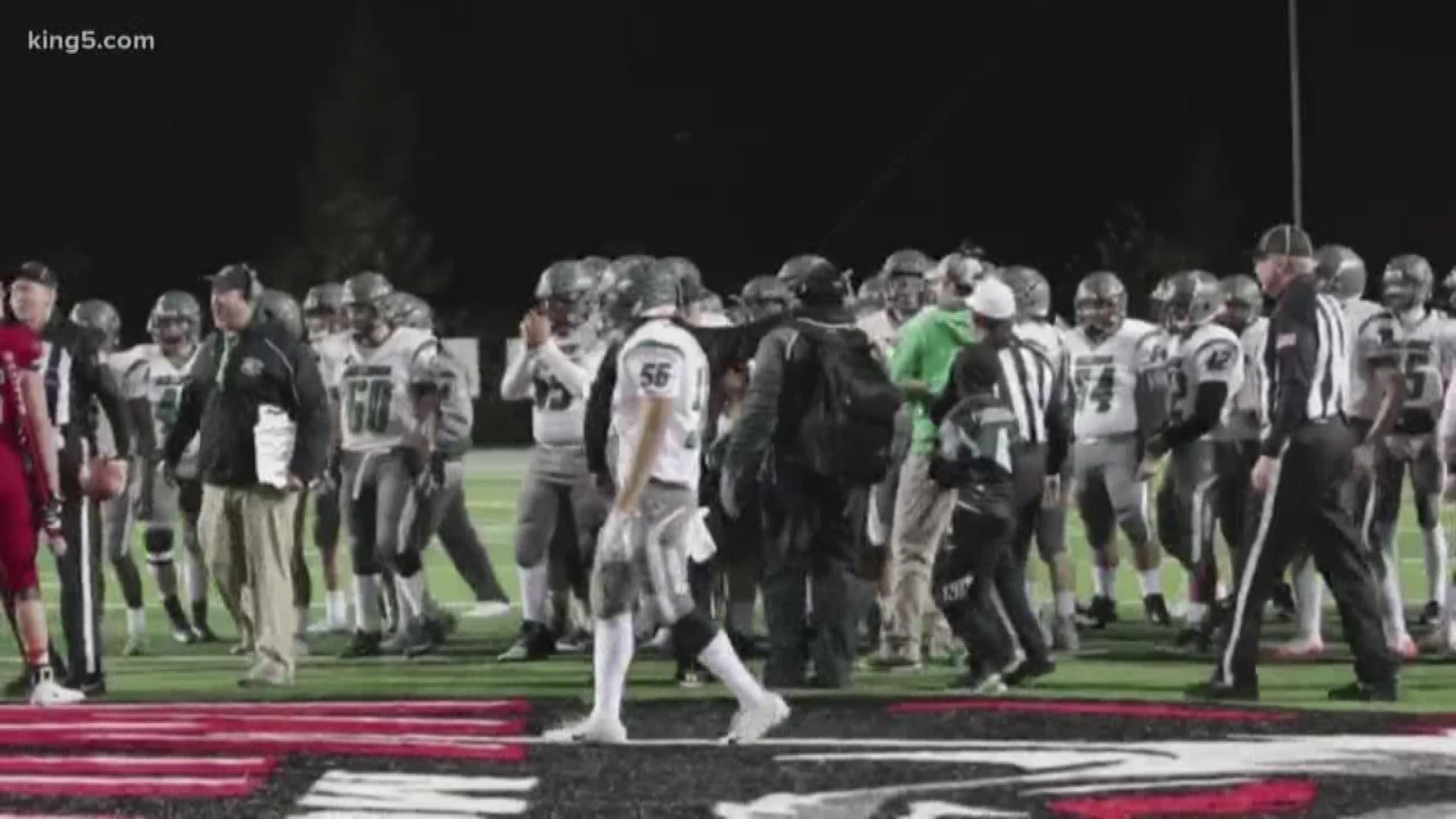 One man was arrested Friday night following an incident at a high school football game where unsportsmanlike behavior by coaches and others has prompted two different school districts to launch investigations.

The Mount Vernon Bulldogs traveled to Mount Si for a crucial Class 4A playoff game that the home team Wildcats ultimately won 39-38.

But people are still talking about the actions of the coaches involved.

Video shows players and coaches from both the Bulldogs and Wildcats teams arguing pre-game at midfield. It also shows two head coaches, Nic Vasilchek of Mount Vernon and Charlie Kinnune of Mount Si, arguing about behavior on and off the field. Kinnune accused Vasilchek of allowing his players to stomp on the Mount Si logo at midfield.

The tension got worse at halftime just after a disputed call on a field goal kick. Officials called both teams back out for a second attempt. When the second kick was blocked, Vasilchek celebrated by storming onto the field and waving his arms at the Mount Si fans.

As Mount Vernon players ran to the locker room past a corner of the stands, one fan pushed someone else in the crowd and was led off by police. That man, a 22-year-old from North Bend, was arrested for disorderly conduct. A Snoqualmie Police spokesman says alcohol was involved.

In nearly the same moment, Mount Si Coach Kinnune approached a KING 5 journalist and attempted to grab his camera, all while shouting angrily for the reporter to show his credentials.

Snoqualmie Valley Public Schools Superintendent Bob Manahan acknowledged Monday that he has met with the coaches and that the district will be implementing new protocols and safety procedures, noting there "was a little bit of a perfect storm." He also said he wished the actions of his coaches "were a bit different."

Snoqualmie Valley is continuing to investigate the circumstances.

Mount Si hosts Puyallup High School Friday in the next round of the playoffs.

Mount Vernon Superintendent Carl Bruner also told KING 5 on Monday that he has been briefed and is discussing potential discipline, and what consequences there could be for "adult staff.”

KING 5 journalist Alex Rozier was involved in the confrontation with Kinnune and has filed a complaint with the police department. Snoqualmie Police say they will begin a formal investigation into the complaint on Tuesday.

Correction: Story was updated to note the kick just before half time was an attempted field goal, not an extra point.