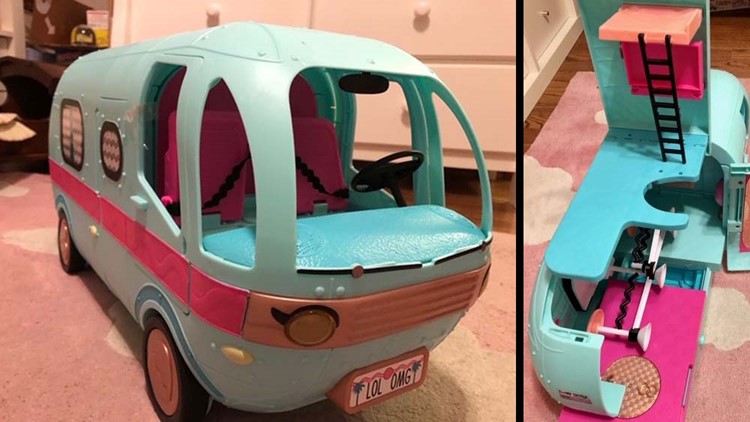 Photo by: Polly Smith
Several parents warn their children were hurt when their fingers got caught in the LOL Surprise! Glamper.

Parents warn of safety issues with LOL Surprise! Glampers after their children's fingers got stuck

HOUSTON — A popular toy that tens of thousands of children got for Christmas has safety issues, several parents warn. They say kids are getting their fingers caught in the LOL Surprise! Glamper.

The problem happens when kids press a button on the bottom of the turquoise and pink toy camper.

Tiffany Peay’s 9-year-old daughter had to go to the emergency room when her finger got stuck.

Peay told Romper.com they tried to gently remove the finger and even used oil to try and slide it out, but nothing worked. She said her daughter’s finger began to swell and change color, so she took her to the hospital.

The little girl was crying and begged nurses not to pull on her finger.

Peay said her daughter was terrified.

Video shows a team of doctors and nurses taking the $99 toy apart to free the girl’s finger, then putting it back together.

Jacqui Rothermel‎ said firefighters had to saw her Glamper apart when her little girl’s finger got trapped.

Dozens of parents have complained on the LOL Surprise! Facebook page, saying they want the toy recalled.

“I cannot believe #lolglamper and #lolsurprise keeps selling these without changing the design,” Dan Malone posted. He said he had to use a drill when his daughter’s finger got caught in the Glamper.

There are no reports of serious injuries, but one mom said her daughter’s Christmas was ruined.

“After a bucket of tears and overall devastation, she is heartbroken that her toy hurt her and is now broken,” Camille Katherine posted on Facebook. “Thank you for making Christmas a scream fest!!!”

The LOL Surprise! brand is owned by MGA Entertainment. The company says on its website their top priority is the safety of children.

“That is why our toys and products are subjected to a rigorous testing process that not only meets, but quite often exceeds legal requirements,” the website states. “All of our product testing ensures that the MGA Entertainment toys and products you purchase, meet the highest standards of quality and safety in the industry.”