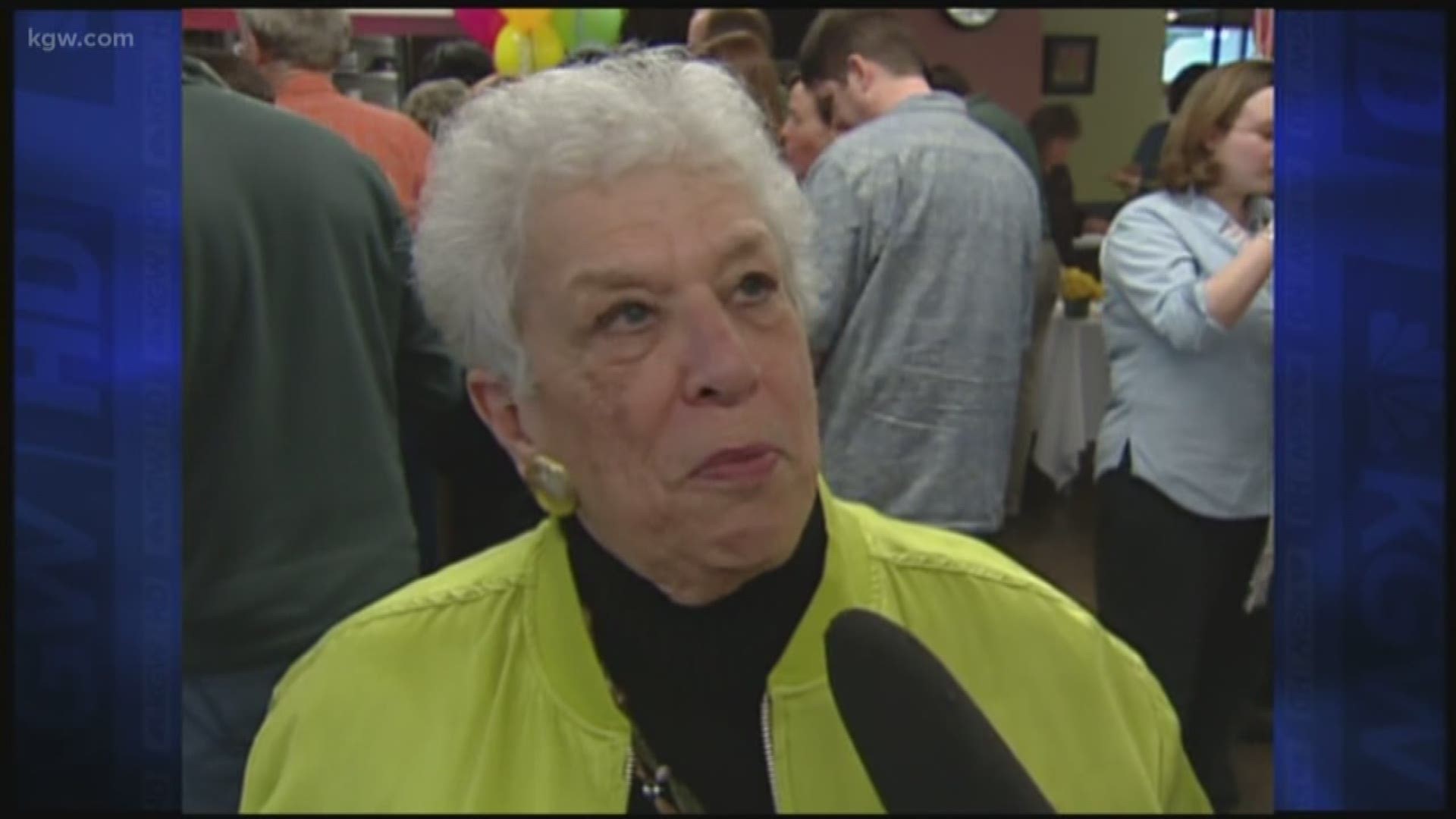 PORTLAND, Ore — Gert Boyle, the colorful chairwoman of Oregon-based Columbia Sportswear Co. who starred in ads proclaiming her as “One Tough Mother,” died Sunday. She was 95.

Company spokeswoman Mary Ellen Glynn did not disclose the cause of death. Boyle, who was chairwoman of the company board of directors, died at a Portland, Oregon assisted living facility, Glynn said.

Boyle took over the small outdoor clothing company in 1970 after her husband died from a heart attack. At the time, she was a 46-year-old housewife and mother of three with no real business experience. But she helped build the struggling company into a national brand and retailer.

"Early to bed, early to rise, work like hell and advertise," Boyle often said, among other pet phrases.

It was her role in an advertising campaign in the 1980s that gave her national exposure.

The ads showed Boyle putting her son, Tim, president of the company, through treacherous outdoor feats to ensure the products met her standards. An iconic photo from the campaign, which has her flexing her arm emblazoned with a "Born to Nag" tattoo, still hangs in the company’s Beaverton headquarters.

Boyle’s father founded Columbia after the family fled Nazi Germany and settled in Portland. Her husband took over the business in 1964. When he died, the business took many calls wondering if Columbia would close and the bank urged her to sell the company.

Always plucky, she entertained an offer for its sale at the time but told a prospective buyer that for the price they were offering, she’d rather run it into the ground herself.

But Columbia flourished under her leadership, and that of her son.

While Tim ran the operations as president, Gert Boyle continued to put in 40-hour work weeks well into her 80s and signed every company check.

Columbia grew and over the years acquired key brands such as Mountain Hardwear, Pacific Trail and Sorel. The company now sells products in more than 100 countries.

She was well known for her no-nonsense attitude and boisterous personality — quick to offer staff or those nearby a "Gertism" and often a few comments not fit for print.

"When she took over, you know, she was a woman CEO in a business where there weren't many women CEOs, in the sports apparel business," recalled Kerry Tymchuk, the Executive Director of the Oregon Historical Society. "She was discriminated against and there was this famous incident where she picked up her phone and the fellow on the other end said, 'I want to speak to the CEO,' and she said 'speaking,' and he said, 'but you're a woman,' and she said, 'you know, I noticed that when I got up this morning.'"

Boyle was the first woman inducted into the National Sporting Goods Hall of Fame and often recognized for her work as a female business leader, including a book on her experience.

"She was a true Oregon icon, the patron saint of Oregon as I call her, and perhaps the one incident that really cemented her status in the Oregon Hall of Fame was the famous kidnapping incident of several years ago,” Tymchuck said.

In 2010, she survived a terrifying home invasion. Three men planned to kidnap her from her West Linn home and hold her for ransom. She outwitted them though by hitting a panic alarm on her security system. Officers found her hurt and tied up.

“It could've turned out so much worse,” Tymchuck said. “But, a very scary incident, and at the end of the evening the West Linn Police Chief came to see her and said, ‘Mrs. Boyle, how are you?’ And she looked at him and said, ‘I was doing just fine until you came in with that North Face jacket on.’ I mean the ability and the spirit to do that after that day, that captures Gert Boyle.”

She had three children with her husband, Neil, who was her college sweetheart. Tim Boyle is president of the company, her daughter Sally runs Portland company Moonstruck Chocolates and her daughter Kathy is an artist.

She had five grandchildren.

Columbia requested that in lieu of flowers, please consider a donation to Oregon Health and Sciences Knight Cancer Institute.

KGW asked viewers to share their condolences and memories of Gert Boyle. Join the conversation on social media.

Tributes from local figures and organizations also poured in Sunday.

"Gert Boyle was an absolute gem, an Oregon legend, and a role model for how to battle adversity with grace and grit. May she rest in peace." — Portland State University President Stephen Percy.

"Gert will always be known as 'One Tough Mother', but I will always remember her for her kindness, directness, and wicked sense of humor. When Gert gave her $100 million gift during the Knight Cancer Challenge, she said that what she did was not any more remarkable than what others did with lemonade stands or bake sales: she gave what she could. I will work hard to ensure that we honor her generosity and faith in the Knight Cancer Institute and end cancer as we know it. She has left a remarkable legacy in many, many ways, and we will miss her … but never forget her. — OHSU Knight Cancer Institute Director Brian Druker

"Gert Boyle was an Oregon icon and a national treasure. Although known to millions for her 'one tough mother' persona, we at OHSU knew her better as a one-of-a-kind woman endowed with an indomitable spirit, unlimited energy, quick wit and an exceptionally warm heart. Her generosity to OHSU, and to many other worthy causes, was boundless. Her steadfast support of the OHSU Knight Cancer Institute — including a transformative gift at a critical time in its growth — has left a lasting legacy that will improve the lives of cancer patients in Oregon and beyond for generations to come. Gert Boyle forever will be one of the driving forces behind our efforts to end cancer as we know it. Oregon has lost one of its most inspiring and extraordinary citizens. Our hearts go out to Gert’s extended family during this profound time of loss." — Oregon Health and Science University

"Gert Boyle was an iconic force for our community. She helped build a business that defined a region. Her leadership will be missed, but we know her legacy lives on in her family and with the entire Columbia Sportwear team. Our thoughts are with them." — Andrew Hoan, President and CEO, Portland Business Alliance

"Gert Boyle shattered glass ceilings in a way that is unmatched by anyone before her in Oregon. When person after person doubted the ability of a widow to manage the company left behind by her husband and father, she proved them wrong, blazing trails for women in business in Oregon. Today, thanks to her grit, Columbia Sportswear is a global brand. And by just by being herself, she proved the importance of immigrants and a welcoming immigration policy to our U.S. economy. Gert never hesitated to speak the truth, and Oregon is better because of that. She will be missed." — Sandra McDonough, CEO, Oregon Business & Industry, Member of the Oregon Women's Forum with Gert Boyle

RELATED VIDEO: KGW archives: Profile on Gert Boyle, 1988 for series on entrepreneurial women (Boyle was No. 1 in the series)

RELATED VIDEO: KGW archives: Profile on Gert Boyle, 2000 (includes great footage of some of the early advertisements that made Boyle famous)

RELATED VIDEO: KGW archives: Profile on Gert Boyle after Columbia Sportswear had moved into 40-plus countries (2000)