The Sleestak makes a comeback in Portland

Brent Marr pays tribute to a 70's classic and reminds his hometown it's fun to be weird. #k5evening 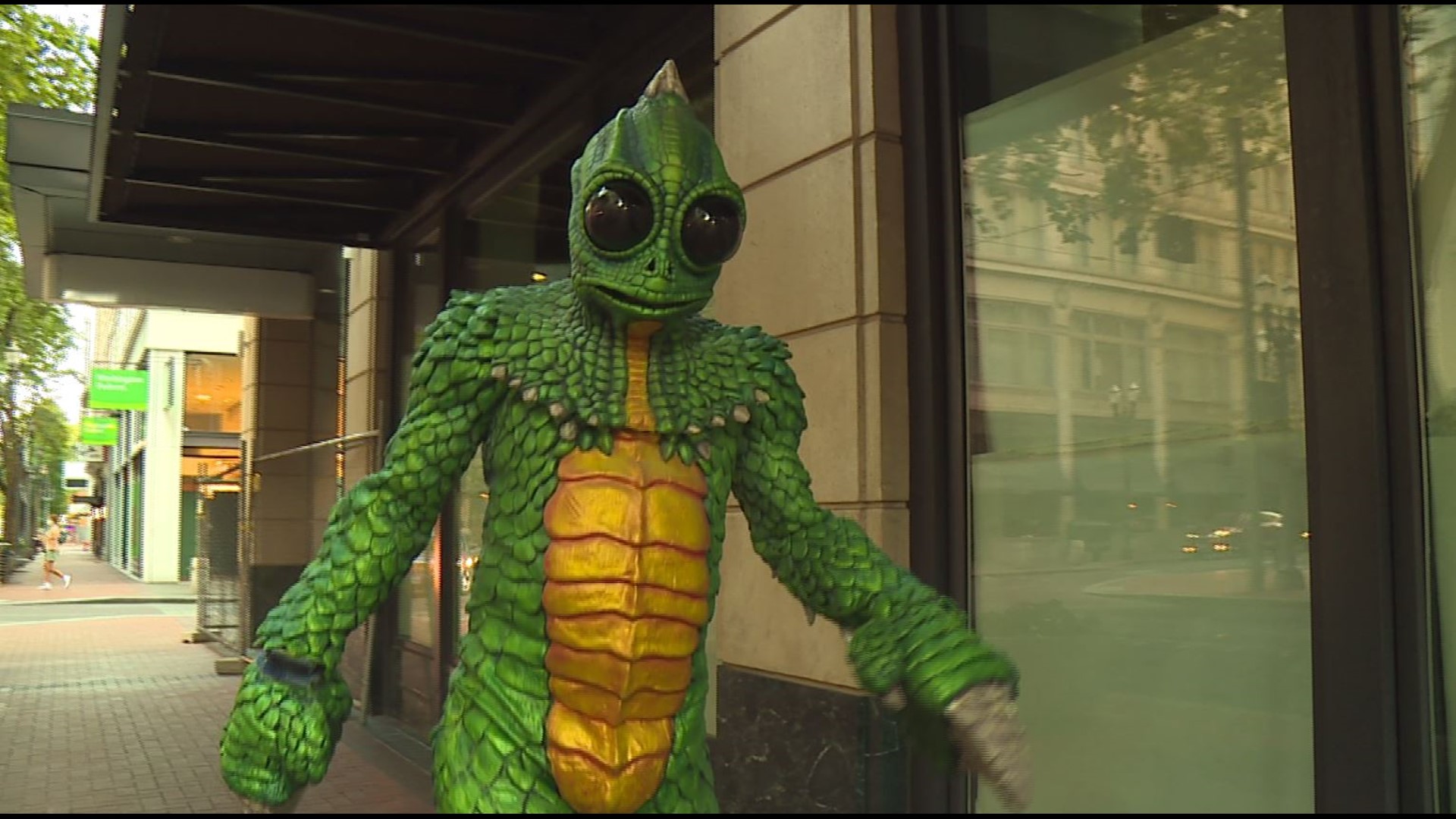 PORTLAND, Ore. — First, you might hear it creeping up behind you.

“It sounds like air escaping from a tire,” says Brent Marr. “Kind of a Ssssss!”

Then you might see it standing on a Portland Oregon street corner. A six-foot tall green creature with bug eyes, a horn on his head and a small tail.

“Yeah that definitely brings back memories,” says one witness.

Memories dating back to the 70's and 80's when "Land of the Lost" introduced kids to a terrifying race of lizard people called Sleestaks.

“I used to be able to say to my sister ‘The Sleestaks are gonna get you’ and she'd cry,” laughs Marr.

They must have left an impression because Marr has gone through an awful lot of trouble to bring back the Sleestak. He started by carving out a head he hoped to wear with a tuxedo for Halloween.

“Once the head came out and it was looking kind of good I decided well I might as well do a body too,” says Marr. “So I took my credit card and here we are.”

With permission from the show's creators, and an urge to remind Portland of its fun side, Marr has popped up in Portland places dressed as a Sleestak. On this day he put on his costume with the help of three friends.

It's a very heavy suit,” says Marr. “It's a bunch of latex parts glued to a wetsuit.

“Basically the body is one part and then the hands and feet are separate pieces. The feet are platforms so once I've got the body on, I just get on a stool and slip into the platforms.”

Once everything is buttoned down below, Marr is ready for the head.

“See, of all the things, the head is the easiest thing to go on,” says Marr’s friend Johnny Amundsen.

The head has a little speaker where Marr can play the Sleestak hissing sounds.

Once the hands go on, Marr is pretty much helpless. He can walk and wave his arms, but he can’t see very well through the goggles.

Marr’s Sleestak is ready for Portand but is Portland ready for the Sleestak? Marr heads outside the building where he works as a rental manager.

For every reaction there’s no reaction.

"This is Portland so a lot of times people just walk by like I'm not even standing there,” Marr says. “Nothing weird going on here!”

Wearing a wetsuit on a hot summer night is a good way to overheat so friends watch Marr with care.

“I'm also watching the costume to make things don't start popping off of it,” says Amundsen.

As quickly as he appears the Portland Sleestak disappears. Fifteen minutes can feel like a long time and Marr needs to shower.