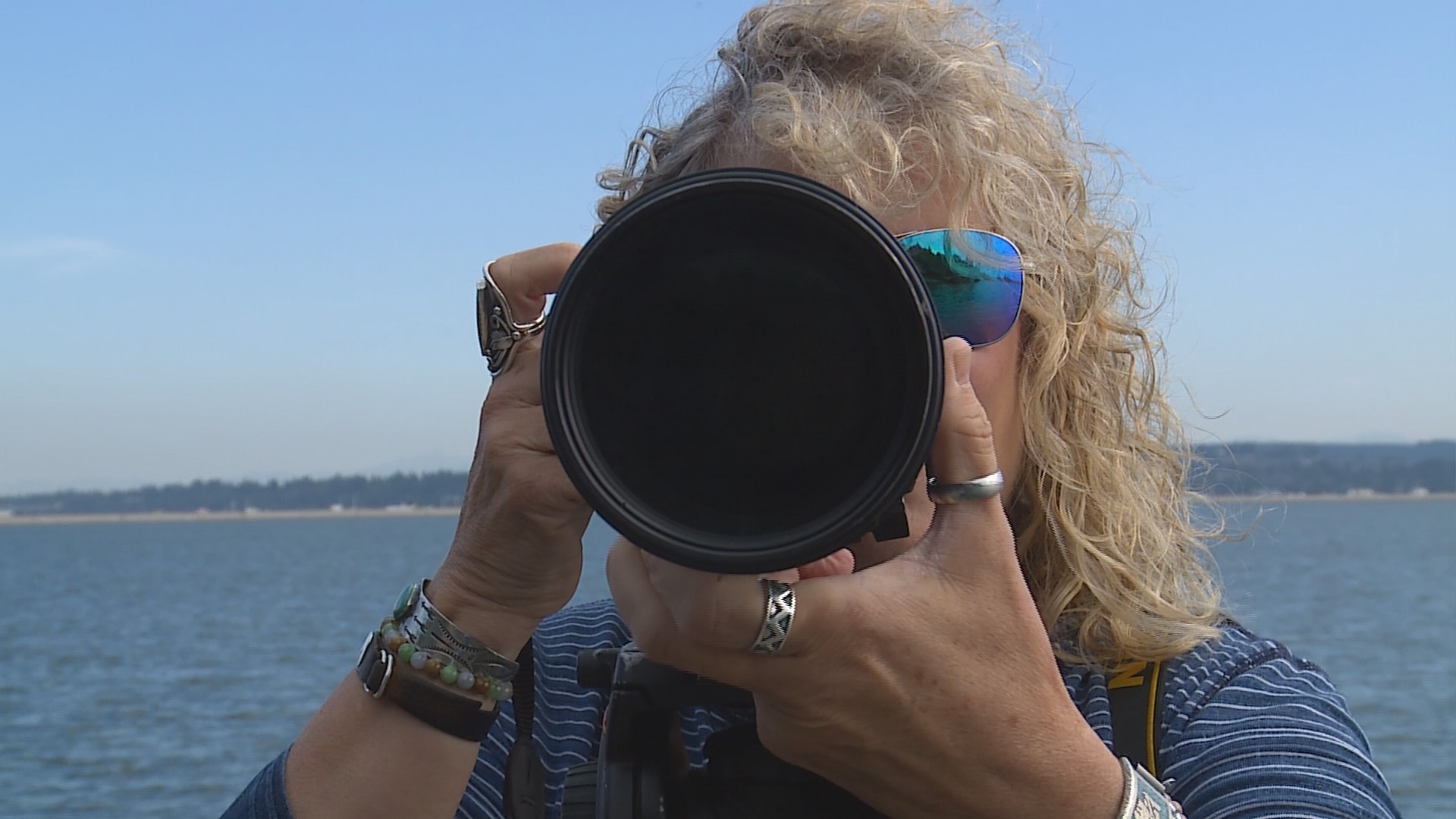 She is an addict. In a good way. Pulitzer Prize-nominated photographer Robin Layton's been working on a project for a decade. "I probably shot over a million pictures honestly."

Her book is already printed. But she can't help herself. Though she's seen one a thousand times, she still gasps when a goose flies by and she's not holding her camera. "Oh! That was a really cool shot. Darn it!"

During our half-hour visit on the dock from which she shot many of the images that appear in her new book "the lake," more birds fly by. A plane soars overhead. A jogger rolls past. Ho hum, everyday happenings. Nothing special. Until you gaze through Layton's lens.

"I've tried to stay awake? I think a lotta people are not awake? Meaning they miss things or they're on their phones or they're walking their dogs and they're missing these special, little moments. Like maybe there's a reflection of the water on a tree just going back and forth. I think if you just look around and take some time and pause?"

146 of the aforementioned million shots appear in the book, the first-of-its-kind featuring Lake Washington. "A year and a half ago, I was walkin' my dogs. And my voice inside said, 'Hey I think it's time to do a book.'" She lives nearby and says she witnesses something new every time she visits. "I think you'd be surprised what you see around this beautiful lake of ours."

Each page of this stunning, coffee-table book is what we could see. As a former Seattle Times photojournalist, she doesn't mess with the images. "Everything you see is done in-camera, meaning when I shoot it, it goes from the camera to the paper. I don't do any retouching in Photoshop as far as manipulating the way it's shot impressionistically."

She shoots what she sees...and sometimes what she does not see. "I just like to capture the energy of things and not be so literal all the time and it's challenging." Like a Monet-esque, blurry image of rowers scooting across the water. "That was the only frame of the rowers I have after ten years. That's it. So it's a very special picture to me."

The most challenging frame? A tiny fish leaping out, leaving a drip trailing from her tail. "You don't even know where to focus right? Cuz they're just randomly (jumping). And they're so fast!"

The cover with a pair of stately geese skimming the water is one of her favorites too. "It's just to be very simple but very elegant. But very contemporary. I call the birds my models. Because usually when you get in the water, they just take off. But they got used to me and it was really wonderful to get that."

And she does indeed go into the lake. "I thought 'Uh oh. I gotta get in the water?' So I bought an underwater housing. Some of my favorite pictures in the book are when they're split-water shots, meaning you see half above the water and half below?"

She says it's part trial and error. "There's not really a formula. It's about getting out there and playing with your camera." And sometimes, it's just luck. "All of a sudden, I hear this motor. And I'm like OMG, I hope this boat goes through the middle of the thickest part of the strip of light. Well not only does the boat go through, but a skier. And there's a dog in the back of the boat."

And sure the book is a finished work of art. But her work will never be done. Another flock of birds flies just an inch above the lake. "Oh! Wish I had my camera then!" she says.

Robin's book is available for purchase on her website.