Gleason, who has ALS, played for the New Orleans Saints for eight years after a standout career at both WSU and Gonzaga Prep.
Author: KREM Staff, Megan Carroll
Published: 12:37 PM PST January 3, 2020
Updated: 6:25 AM PST January 16, 2020

Gleason earned the honor through his fight to raise ALS awareness and improve the lives of patients through his foundation, Team Gleason. The foundation has since raised millions of dollars.

Gleason, who has ALS, played football for the New Orleans Saints from 2000-2008. Before his 2011 diagnosis and NFL career, he was a standout football player for Washington State University and Gonzaga Preparatory School.

He graduated from Gonzaga Prep in 1995.

He is the father of baby girl Gray, who has born in October 2018, and her older brother, River. His children and wife, Michel, were in attendance at Wednesday's ceremony.

During his remarks at Wednesday's ceremony, Gleason thanked his wife Michel for her support.

"This was not the life we imagined and it hasn't been easy," he said.

Gleason is the first former NFL player and only the eighth former athlete to receive the Congressional Gold Medal, the nation's highest civilian honor. Other recipients of the honor include Rosa Parks, Thomas Edison and the Dalai Lama.

The medal that Gleason received is designed specially for him.

Gleason says his is a 'human story'

Gleason delivered remarks on Wednesday after receiving the Congressional Gold Medal, where he said his award is for everyone who experiences adversity, tragedy or anguish.

“I suppose I don’t see my story as a football story or even an ASL story, but rather a human story. The truth is that we all experience pain in our lives but I believe that the problems we face are our opportunity to find our human purpose," Gleason said.

Gleason added that adversity is an opportunity to "keep exploring," a motto that he has embraced throughout his diagnosis.

Our greatest strength as human beings, Gleason said, is sharing our weaknesses and vulnerabilities with one another.

“While sharing one’s weaknesses may not be common practice for people…sharing my weaknesses was entirely critical for me to play years in the NFL. And it has been unquestionably critical to my survival and purpose for the last nine years," he said.

Near the end of his remarks, Gleason posed several challenges that humans will tackle in the coming years, such as exploring and colonizing other planets, solving climate change and harnessing the power of artificial intelligence.

"These challenges provide us with an exponential opportunity as Americans humans," he added. 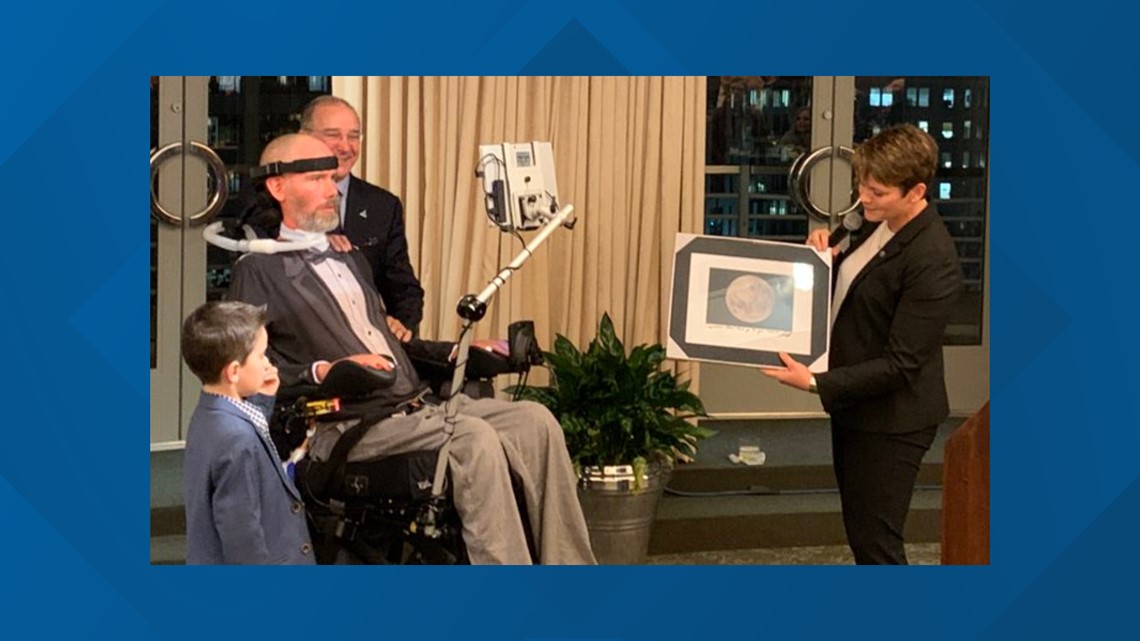 Saints Quarterback Drew Brees gave a powerful speech about how he learned about Gleason's diagnosis.

"There are significant moments in our lives that we remember," he said.

He listed the day the Saints won Super Bowl XLIV as one of those days, along with the day he learned of Gleason's ALS diagnosis.

"Of all the people on this earth, Steve is the last person to ever deserve something like this. This is not fair," he said.

He said he learned about the diagnosis in an e-mail from Gleason.

"Steve was as blunt and raw and honest as he could be in that email. Detailing his diagnosis but also acknowledging that he was scared and frustrated," he said. "But at the end, Steve said, and I quote, 'I promise to fight and believe and expect the extraordinary and smile and laugh and cry and love our lives for every breath that remains in my body. Please, Please, help me do that until I'm 109.' I'm betting on you Steve."

Brees said Gleason's attitude about thing has never been about ifs but rather about when.

Louisiana Rep. Cedric Richmond spoke ahead of Gleason receiving the honor, calling him a "stellar role model" for others.

“When you got your [ALS] diagnosis, you didn’t take a knee and end the plate. You grabbed the ball and charged ahead," Richmond said.

"To America, you're laded as a hero. But to New Orleans and the rest of Louisiana, you're forever a Saint," he added of Gleason's time in the NFL.

"He gibes hope, even for those who have ALS," he added. "Through his example of how he lives, he changes life for us all.

“Steve has an incredible gift for inspiration for people in the cities who need it most," he said, referring to Gleason's support of New Orleans following Hurricane Katrina.

Scalise said he is proud to call Gleason his friend and that he couldn't think of anyone who deserves the honor more.

Washington Sen. Patty Murray gave the crowd a, "Go Cougs," during her remarks, in celebration of Gleason helping to lead WSU to their first Rose Bowl in 67 years.

She added that the Congressional Gold Medal is awarded to "only the most uncommon people," praising his persistence and bravery in multiple areas of his life.

"He showed uncommon bravery, insisting there would be no white flags," she said.