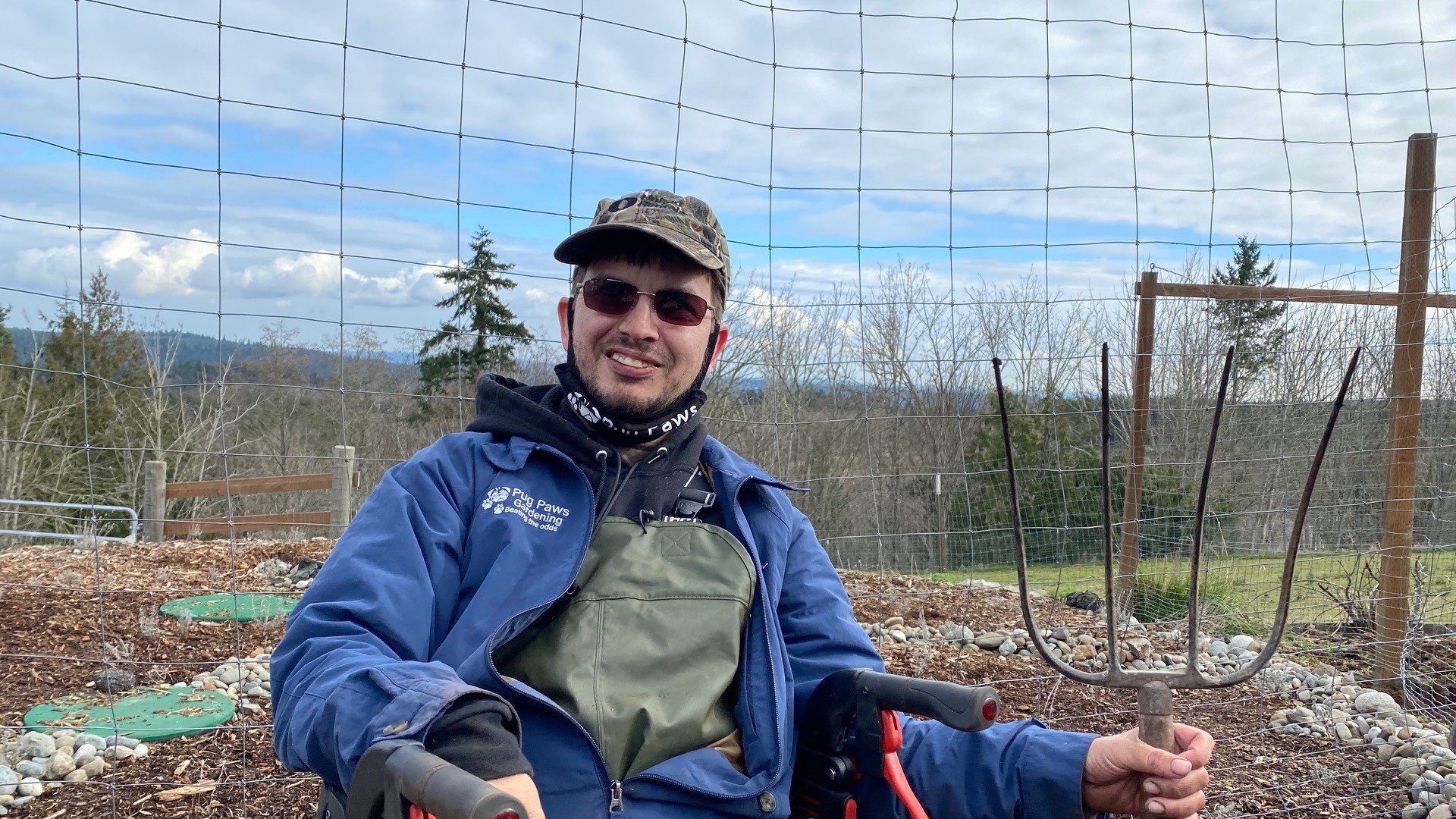 PORT TOWNSEND, Wash — Terry ‘TJ’ Belgarde said this while taking a break from a landscaping job in Port Hadlock recently: "Everybody has their limits, but it's a balance between finding your limits and what your goals and dreams are."

TJ has negotiated that balance between limits and goals all his life: When that goal was finding a job, it was other people's limits that frustrated him when they couldn't see beyond his cerebral palsy.

“It's obvious I have a walker, and I walk with bent legs, and people, before they hear what your skills are, or what you can do, I feel they make preconceived judgments based on appearance.”

So he started his own landscaping business, named it for his support dog - a pug named ‘Onyx’- and got to work.

Now TJ Belgarde has a job. He’s the owner of Pug Paws Gardening.

“This job has saved my life in more than one way - I mean it provides me income, but it also provides me a place to output energy, get exercise. You know, I did a lot of physical therapy growing up, this is better than any physical therapist,” said TJ. He uses a walker, but often abandons it when he’s working in gardens. Instead, he drags himself through the soil, meticulously weeding – his specialty.

He’s used to the doubletakes by now.

“I've worked jobs alongside roads where people have stopped and asked me if I’m okay. I had a Fed-Ex guy and a UPS guy, all sorts of people. I've actually thought about getting a sign that says 'Pug Paws Gardening, don't worry, I’m just working. I didn't fall’.”

Leia Ray is one of TJ’s customers:

TJ doesn't just keep her garden beautiful - he motivates her.

“He's just such an inspiration,” she said, “I'm like am I gonna work outside today? Yeah, TJ's out there, Okay I got this!”

And getting his hands in the dirt isn't just good for his finances:

“With my cerebral palsy, the more I move around, the longer I'll be able to move. When I was little my doctor said I wouldn't be walking much past 30 and I just celebrated my 35th birthday,” said TJ.

TJ’s future plans are to grow his business, buy a truck, and keep defying other people’s limits by continuing to push his own. A friend has set up a GoFundMe site to help TJ reach the material parts of goal. This landscaper already has the pushing his own limits thing down: He told our crew he tries not to work in snow, then after the latest storm, sent us some footage of himself clearing up a yard -- in a couple of inches of snow.

“I hate the word normal, what is normal. Who gets to decide what normal is?” TJ asked.

“Anything is possible, you're the only one that puts limits on yourself.”